A science fiction/ science fantasy novel that deceptively brings its readers to face some rather potent and hard questions about the consequences of war. 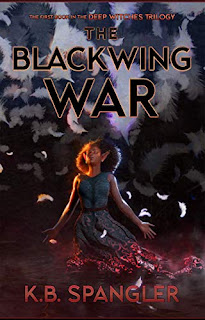 Tembi Stoneskin has a problem. Sure, she’s a Witch, one of those people chosen by the sentient(probably) extradimensional alien known as the Deep and uses the power of the Deep to support instantaneous FTL travel and keep the human galaxy humming. The Deep doesn’t just pick anyone, it's a prestigious position, and even though Tembi is just 16 years old, she already is showing great potential. But when the Deep, which definitely can act on its own, takes Tembi to the destruction of a moon, change is definitely in the wind. Lancaster, the world where witches reside, has stayed neutral in an interstellar conflict but with one move by the mysterious Deep, that neutrality, and the future of that war, are now up in the air. Even as Tembi tries to grow into her role and find the secret of the destroyed moon, other forces have plans for her, and for the witches, and for the Deep.

All of this is packed into K B Spangler’s novel The Blackwing War.

Right off, Tembi feels a bit like a YA magical character with a pretty good gig. The Deep can bring her anywhere, anytime, it gives her a lot of power, respect and freedom. Certainly, she has responsibilities and we see those right off the bat, but Tembi feels like someone out of, say, Final Fantasy. Young, potent, powerful, with what feels like magic in a science fictional world. The novel does feel a bit like science fantasy in how Tembi and her relationship with the Deep gives her large degrees of freedom. This changes somewhat as the narrative deepens and goes darker, but that science fantasy initial impression of the story and rules of the universe never quite ever goes away.

I do enjoy the universe that Spangler presents here, even as it is several things at once and the universe that we see changes and shifts as Tembi moves about it. The Blackwing war is a young witch defusing bombs, and it is also her as a daughter to a mother who is a power in her own right, and it is a war story, and it is a story of some even darker notes. There are a number of “Set pieces”  that put Tembi in a variety of situations and while the novel definitely has a gradient, it's not always predictable. It’s messy. It’s changeable.

Indeed, the novel in general is a chameleon.  One of the bugbears of women writing SFF these days is shoving all of their work into the YA box, no matter how laughably inappropriate that box might be. (Rebecca Kuang’s The Poppy War is decidedly not YA no matter how much you want it to be so). With The Blackwing War, though, the YA feel at the beginning kinda works to a degree, given Tembi’s youth, her inexperienced but growing into adulthood perspectives, her relations with her Mother, her exploration of relationships (and let me note here the novel is definitively queer-friendly) and the early tone supports that YA label. That YA label shifts though, as the novel does, the novel is a chameleon and is always primed for change.

That chameleon nature of the novel really has the rubber hit the road, though, when it comes toward the back portion of the novel. Sure, we start off with the cracking and breaking of a moon, and sure we have a friend of Tembi’s in rather dire straits. The backgrounded war and conflict, even as Tembi jousts with various figures, comes to real and striking home when events lead Tembi to investigate a concentration camp. Yes, a full fledged concentration camp.

This is a pretty tough and hard portion of the novel to read, and I can imagine it was very much difficult for the author to write. This is where the author bends her abilities to the fullest to try and engage with this in something more than a superficial way. This is a tough subject for the book and for the author and frankly, when I picked up the book, even given the title, I couldn’t have predicted this is where the author was going or wanted to go with the novel.

And yet, looking back, I can see that the scenes of Tembi in the concentration camp are the *point* of the novel, this is what the novel really wants to get the reader into and engage and question. The book, the author wants to bring the reader here and the novel doesn’t sugarcoat or soft pedal what a concentration camp is, and what it DOES. Part of that tension is within Tembi herself. With the Deep at her side, she could leave, escape at any time, flee from the horrors of the place, and sixteen year old Tembi, who for all of being a Witch has lived a sheltered life, really isn’t ready for what she finds. The trick of the novel, the thesis of the novel, I think, is to make the reader ready for what is going on at the concentration camp, and to engage with the costs of war and conflict.

That build up is a through line through the novel. From the breaking of the moon, to the search for a missing friend, through seeing a raid that Tembi gets caught up in, the novel does an excellent job in building the reader toward that final sequence. And yet the novel makes it clear that for all of the magical potency that Tembi’s connection to the Deep brings (hence the science fantasy notes noted above), the Deep and Tembi’s power, Tembi can’t quite snap her fingers and fix anything, turn after turn. She can solve her own immediate personal issue, but the novel is one that shows and gives Tembi’s a lot of power and then shows the limits of that individual power when faced with something as large as a war.

The Blackwing War, then, is a novel that continually undermined and challenged my expectations and thoughts as to what the novel was, what it wanted to be, and what it was offering me as a reader. This turned out to be a more challenging read than I expected at the beginning. And I am not entirely sure that the gear shifts work as well as they might. But the novel is trying and exploring a lot of things that this review doesn't have the space to really get into. There is much for the reader to discover.

The novel is like a quantity of liquid helium at low temperatures, slippery, amorphous, hard to pin down and moving in unexpected ways and directions at the slightest provocation and stimulus. I can see how some readers might be uncomfortable with a novel that refuses to stay in a particular lane, but on the other hand, while the gear shifts might not be perfect, once the engine of the novel is in a new gear, it shows that the writer’s skills in a variety of tones and modes is extremely strong. The novel offramps well for a first book in a series (something that readers of my review know I appreciate), but for me I look forward to what the author does in subsequent volumes.

Bonuses: +1 for posing some excellent questions that have no easy answers

+1 for strongly defined and memorable characters.

Penalties: -1 The gear shift in tone may throw some readers off as well as just the amorphous and chameleon nature of the narrative.