Microreview [Book]: Tower of Mud and Straw by Yaroslav Barsukov

A story with rip-roaring pacing and imagination. 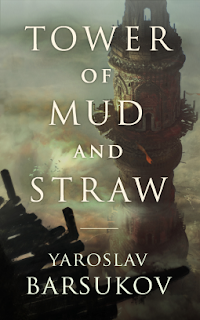 Playing with magic can be enchantingly impressive, but it can also be a dangerous act. That is never more clear in Tower of Mud and Straw. Its magic system is so inflammatory that it could spell doom for those affected. But there’s a different kind of magic going on in this novella, and that lies in its writerly craft. At a sentence level and in sheer ambition, it’s admirably wild and feels like at any time, the story could overload and explode in disaster. I’m happy to say that in terms of literary talent, Tower of Mud and Straw has writerly spellcraft that sometimes buckles under its own weight but otherwise soars.

The novella takes place in a steampunk-esque setting. Minister Shea is ordered by the queen to gas protesters but refuses. As punishment, he’s sent to the border to oversee a massive anti-airship tower. But something is awry, both regarding his history and the tower’s. He’s met with forces of various interests that try to pull him in their direction. He must reconcile with his own trauma, while digging into the world’s underbelly, and he may not like what he finds.

Tower of Mud and Straw takes a moment to lay the foundation for its unique world, but once the grounding is down, it charges on through—especially at its conclusion. While that rushing proved to be entertaining, some character development got lost along the way. The romantic relationship felt abbreviated, and what could’ve been a big a reveal for a certain character’s motivation felt more like moving the plot along, rather than a full-forced, surprising gut punch.

Two characters that did not suffer from abbreviated development is the protagonist Shea and his sister Lena. Shea is faced with quandary after quandary, and the novella does a great job of getting inside his head as we witness him processing and weighing selfish vs selfless gains. Despite showing compassion and humanity from the outset, I liked how he wasn’t a completely gilded, one-dimensional character. There was a sheen of morality, but by human nature, darkness still seeped into him, however small. Meanwhile, his sister Lena is dead from the outset of the novella, but the story intersperses flashbacks that expertly explore her and Shea's relationship, making the loss feel all the more potent.

The worldbuilding also left me wanting. As the title should indicate, the tower is the centerpiece of the story. Not only is it colossal in size, but its immensely described. But in its periphery is a world that has enough for me to get a bearing of, investing me in its story, but not nearly enough for me to sink my teeth in. A story that piques my interest and makes me wish for hundreds of more pages is something that deserves praise amidst the criticism. I hope there will be further stories in this universe, to further explore the world’s political machinations, magic, and fables.

The tower is a massive thing, made from countless hours of work. It’s something that inspires awe in the story for its sheer ambition. Later in the tale, it comes to light that there are architectural deficiencies therein. Just like the novella, there are some tarnishes and imbalances, but even when you learn about it, you can’t help but still be awed by the sheer imagination of the thing. Tower of Mud and Straw might not have answered all my burning questions, but it stands majestically tall, in many ways that tower over most.

Bonuses: +1 For many beautifully lyrical passages.

Negatives: -1 For a few rushed instances.

POSTED BY: Sean Dowie - Screenwriter, editor, lover of all books that make him nod his head and say, "Neat!"