A fascinating look at the world in 2095, where the potential emergence of a true AI threatens to upset a society of designer drugs, moderate artificial intelligences, climate change, and complicated politics. 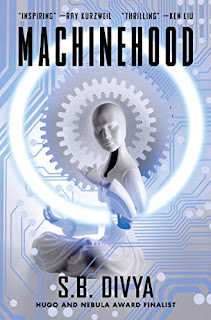 Welga Ramirez needs to do one more job. Or more precisely, she is very nearly ready, as soon as the application is approved, to pull up stakes and move off Earth to one of the space stations that has declared independence. It’s a good thing too, because her job as a bodyguard is tearing her body apart. But when an attack by a hitherto unknown terrorist group strikes fear across society, especially given their strong and radical demands regarding artificial sentient life and humans' relationship with it,  Welga really does have one more job, even as her body might not be up to surviving it--to find the source of the titular Machinehood.

This is the core, but only one strand, of the complex and rich world and characters in SB Divya’s Machinehood. Divya’s Machinehood brings together a core of characters connected together across the globe (in ways and parallels that make me think of Malka Older’s Infomocracy novels) as they independently come to terms with the sudden upsetting of the applecart, globally, as well as how it boils down to their individual lives, in a rich matrix of worldbuilding, plot and action.

Let’s start with those characters. Walga Ramirez is our main protagonist, and in a deft bit, we find out only somewhat within why she has such an unusual first name. The “one more mission” trope is an old and well worn one. Walga’s reasons for wanting it to be her last one also marries to  the “doom clock” mechanic of Walga’s dependency and its side effects making her more and more debilitated as time goes on. This helps inform her character and keep her and her plot moving, as a gear that is definitely moving faster than other parts of the plot--because she has to. She also gets the action scenes, the bulk of the thriller plot, something that Divya excels at, and there is a good amount of adrenaline in her story thread.

By comparison, Nithya provides a lot of the human drama, and also a feeder of information, both to Welga in her trying to figure out why her body is going so wrong, and also in her own right in exploring the medical ethics, and extrapolations, and the personal and individual level on how the Machinehood’s threat illuminates, reflects and refracts the issues raised in the novel. If Welga brings the action and thriller elements, Nithya is the one who deep dives into bioethics on a number of levels. We get it in herself, and her relationship with her husband, Luis (Welga’s brother). We get it with her father in law, living in a desertifying Phoenix Arizona, and we get it as she investigates Welga’s issues. In a very real way, Nithya does the heavy lifting of present day worldbuilding even as her sister in law launches the reader through it.

The third point of view in the novel is one that is not in the same time frame of the others, and that is Josephine Lee. Josephine’s story completes the triad by bringing the history and background to the story. To speak a lot about Josephine would be highly spoilery, suffice it to say, she is far more important to the novel than simply providing a lot of history and background on the political, bioethical and social underpinnings of the world of the year 2095.

And let’s talk about that world that the author brings to life here is a complicated and intriguing one that marries both extrapolation of current trends with a couple of unexpected curveballs to make the world fresh and not entirely predictable in its execution, providing a sense of discovery and revelation for a reader. There is plenty of “If this goes on...” in this worldbuilding regarding how technology, biological, chemical, computational, and engineering play out. Sub orbital ships are background furniture in this world, space stations are trying to be self sufficient and independent. Artificial intelligences are getting better and better if not achieving sentience (or HAVE they?) and are as ubiquitous as cell phones-- and one can be even more dissociated from life without your WAI (a weak AI agent) in 2095 as you would be without a cell phone or the internet today. And yes, Divya in fine fashion at one point does takes Por Que away from Welga, and we get to see how much Welga is dependent on same (and we see that across the spectrum elsewhere as well.

But it is the unexpected bits where the novel really shines. Having new and interesting political alliances, conflicts and world backdrop in terms of technology and relations that the novel shows the full range of its inventiveness. This is a complicated and complex future, and some of the turns that the future takes between now and 2095 are for the reader to delight in uncovering. These political, technological and social shifts really help bring this novel to life on a science fiction front, and it allows for oblique commentary on the world of today, in that tradition of SF novels speaking to our present. Much like Divya’s previous work of Runtime, this world feels rich enough that I’d love more stories set within it.

The plotting and the ultimate mystery of what is going on is the third support where this novel shines. There is a fair tension, for characters and readers alike, as to who and what is behind Machinehood and what their ultimate aims really are. There is a level of tension and mystery as to what is going on, and a slow putting together of the clues and information, and of course, false leads, false flags, and people who want to use the Machinehood’s attacks for their own agenda, and see the world through their own worldview. There is a definite realization and working out of how false news and incomplete information can spread and lead to bad decisions on so many levels that is a reflection, like good science fiction, of our time and place. The theme of “people being treated as machines” is particularly resonant and relevant in a world where a major company docks workers for going to the bathroom “on company time”.

The novels that come to mind as I read Machinehood are a pair of novels that I have mentioned before in relation to each other: LX Beckett’s Gamechanger and Karl Schroeder’s Stealing Worlds. How the world has shaken out is very different in Machinehood from those two novels and each other, but it is the character focused, intriguing deep dives in both novels into the technology of the future and how we and the technology evolves together that make a resonance of a trio of novels that work well together. The bio technology of Machinehood, the use of zips and other enhancements is very different than the virtual worlds of Gamechanger and Stealing Worlds, and yet all three worlds revolve around artificial intelligences (or possibly artificial intelligences) and what it means to be human, and what it means to be human in relation to those other beings. Divya’s jump to full length novels stands proudly tall with them in that regard.

Bonuses: +1 for excellent and inventive worldbuilding

Penalties: -1 I was left with a couple of niggling questions about the world afterward that feel more like missed opportunities than anything.