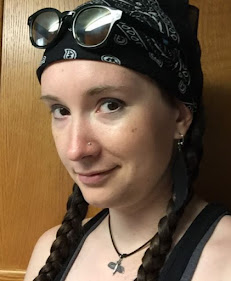 Elly Bangs' debut novel Unity is set to release later this month. This cyberpunk apocalyptic thriller includes otherworldly chases across the desert, underwater enclaves,  a cybernetic bodysnatcher, and a whole new definition of consciousness. Danae needs to reunify before her enemies catch up to her, and they seem to be coming out of the woodwork.  With philosophical takes on personhood and grief, Unity will keep you thinking as pulls you through a breakneck pace.   Everyone in this story has a secret, what will happen when their secret no longer has to be carried?  When your secret is known, does the world end, or does it just keep on keeping on, like nothing happened?  You can see Bangs reading from Unity, at the Tachyon Publications website.
For a taste of Bangs' fiction, I highly recommend checking out her short story "Deep Music", which was recently published at Clarkesworld.  Her short fiction has also appeared in Beneath Ceaseless Skies, Escape Pod, Fireside Quarterly, Galaxy's Edge, Daily Science Fiction, and multiple anthologies.
Bangs is a queer trans woman who was raised in a new-age cult and once rode her bicycle from Seattle to the Panama Canal.  She describes much of her writing as uncategorized weirdness with an emphasis on longing, heartbreak, and the fate of humanity.  You can learn more about her and her work at her website, elbangs.com, and by following her on twitter @elly_bangs .   She was kind enough to talk to me about the long work of creating Unity, what exactly Danae is, how she kept everything organized, and more.  Let's get to the interview!
NOAF: Congrats on your forthcoming novel Unity! What can you tell us about this novel?
Elly Bangs: Thanks! Unity is a peri-apocalyptic thriller with cyberpunk elements. It centers on a woman on a journey across the devastated wasteland of the future Southwest -- aided by her complicated friend/lover and the remorse-stricken mercenary she hired to guard them -- pursued by a bloodthirsty tyrant and a ghost from her past, all under the shadow of a potentially final world war. It’s steeped in gritty dystopian cynicism but also inklings of utopian hopefulness. Deep thoughts, but also explosions.
NOAF: What was your writing process like for Unity? About how long did it take you to write?
E.B.: The process was a bit ridiculous. I started writing what would eventually grow into Unity about 18 years ago, toward the end of high school. I believe I’ve rewritten every part of it from scratch at least three or four times since then, and it’s been about different things and had different hearts from one year to the next. I couldn’t write another novel in quite the same way if I tried. 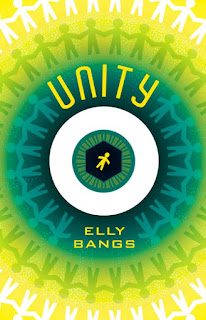 NOAF:  The back cover copy mentions Danae's grief that “cannot be contained in a single body”, her fractured self, and a “larger collective of beings to whom she once belonged”. It sounds like this goes deeper than Danae just having a really, really tight knit family. Can you unpack this a little? Her fractured self, the larger collective? What is her community like?
E.B.: A minor spoiler: Danae is essentially a gestalt consciousness. She carries the combined memory of hundreds of people, and of the enormous mind they once fused together to form, but years ago she was traumatically separated from the rest of herself and forced into hiding. Many of her other bodies were killed. For all she knows, she’s the last surviving fragment of the whole expansive being she once was -- but she’s on a quest to find the rest of herself, if it’s still out there. Her worst fear is that it won’t take her back.
NOAF: What was your favorite scene in Unity to write? Were there any characters who ended up writing their own journey in a surprising way?
E.B.: The sex scene was my favorite. It was a bit outside my usual comfort zone, but I’m pleased with how it turned out. The character whose arc evolved and deepened most unexpectedly was the most disturbing and unpleasant one to write -- ‘Borrower’, the tortured cybernetic bodysnatcher who’s been obsessed with Danae for decades. I learned a lot about monsters by working on him.
NOAF: As the story progresses, more and more people are looking to get their hands on Danae, and all of them have different intentions. Lots happening, and lotsa bad guys. How did you keep it all organized while you were writing?
E.B.: I’m very fond of patterns and constraints, and I use a lot of flow charts and color-coded spreadsheets when I write novels. It’s a good way to keep track of the big picture and break problems down into more manageable parts. A great way to avoid actual writing too.
NOAF:  You're also a prolific short story writer, with short fiction appearing in Beneath Ceaseless Skies, Daily Science Fiction, Clarkesworld, Escape Pod, and elsewhere. Unity is your first full length novel. What surprised you most, about the differences between writing short stories, and writing a novel?
E.B.: It was backwards for me: I’ve always found novels easier than shorts. Unity is the first novel I ever set out to publish, but I have four others permanently trunked and two or three new ones cooking. It wasn’t until I attended Clarion West in 2017 that I really fell in love with short stories, and I’m still daunted by the efficiency, balance, and restraint they require. A novel comes with all kinds of room to maneuver plots, develop characters, and integrate revisions, but every word of a short story has to pull a harmonious weight. I’m constantly learning from authors who manage that so brilliantly.
NOAF: I can't get your short story “Deep Music” out of my head, any chance of you expanding Quinn and the aquids into a longer work or more short stories?
E.B.: I’m delighted you liked "Deep Music"! I’m pretty happy with where all those characters ended up, but I also miss them and would love to spend more time with them. Perhaps we haven’t seen the last of Digby or its pocket-sized waterproof keyboard.
NOAF: Thanks so much Elly!
POSTED BY: Andrea Johnson lives in Michigan with her husband and too many books. She can be found on twitter, @redhead5318 , where she posts about books, food, and assorted nerdery.
Posted by Andrea Johnson at 12:00:00 AM