Microreview [books]: The Master of Dreams and The Mistress of illusions by Mike Resnick

In The Master of Dreams and The Mistress of Illusions, Mike Resnick introduces us to Eddie Raven, a seemingly ordinary fellow catapulted into a series of fictional and non fictional worlds. 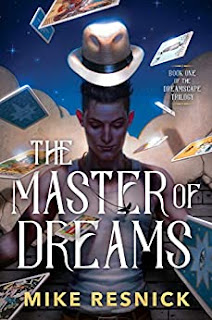 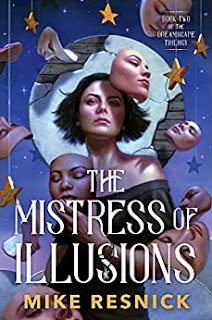 Eddie Raven is living a good life. The woman he is falling for seems to feel the same way, and he seems ready to pop the question to her. But a fateful visit to a fortune teller leads to violence, sudden strangeness, and Eddie leaving his NYC life and winding up in another world. Now being hunted, chased and confused, Eddie has to figure out what he kicked off in that fortune tellers shop, and most important to him, find Lisa, the love of his life.

This is the premise of The Master of Dreams and its sequel The Mistress of Illusions.

Since I cut my teeth on books like Nine Princes in Amber and the World of Tiers series, I imprinted early on books, series and characters who can and do walk between worlds--willingly or not. So the basic premise and inciting incident appealed to me, and so I delved into the book, seeking connections with books in the genre and to see what Mike Resnick, an author I’ve not read in some time (but read plenty in the 1990’s, his oeuvre is rock solid) has been up to. Resnick does with the well-meaning, mostly clueless but with enough genre savvy and thinking on his feet approach to Eddie. Eddie’s characterization is not really deep, but his drive to find Lisa and return home are relatable. He doesn’t want to be stuck in a fantasy Casablanca, or Camelot, especially not when its made clear to him that his sojourn in these fantasy realms, without action, would be permanently and possibly with a short life span.

As the first book ends and the second book takes off, we go deeper and get some more questions raised, and a couple of questions answered. In particular, and an effective rug-pull for the unwary reader, is the nature of Lisa herself. The revelations about her nature set Eddie off of his carefully regained equilibrium again, and launches him into the next phase of the narrative. The novels reach the point where questions raised at the beginning of the series start to be answered, and the stakes are raised. We get more worlds, more scenarios and Eddie has to figure out how to harness his inner potential. The first novel finds himself completely as a passive protagonist, but it is in the second novel that he starts to gain more confidence in his abilities, but it's a very slow process. Eddie’s struggles are identifiable with anyone who has been put in a completely unfamiliar situation where the rules have to be figured out even as he is plunged into deadly danger.

However, I think in the end that I wanted something substantially more out of the books than they were willing to offer. I was intrigued enough, especially with the muddled main character dropped into the soup of The Master of Dreams to see more questions raised--and to see some questions answered, especially as to how Eddie got into this mess in the first place. The problem for me is the answers given do not quite align with the information and setup as presented. I can’t quite tell that it's a case of Eddie (and the reader) being lied to throughout, or an authorial change in what is going on. This is a massive failure of worldbuilding for me.

In any event, the ending portion of the second book was for me rather unsatisfactory in that regard, presenting scenarios that don’t align with the previous ones. Throughout the rest of the first two books, there were  things a reader could and did hang on in order to follow along with Eddie and either anticipate his problems, or have the issues subverted. The first world, with Eddie in a fantasy Casablanca. Peter Pan’s Neverland. Eddie as Frankenstein in a Noir verse, and others. These are all inventive, and interesting and follow a pattern. But a scenario where he actually seems to change real life history, and a scenario without any hooks whatsoever really don’t live up to the premises previously established. I’d expect in a trilogy that the premise is well established and questions answered so that the third book can launch us into the overarching conflict. And while the characters helping Eddie tell him that this is what happening, it just doesn’t align and it frustrates me. Whereas the first novel left me with questions enough to go onto the second book, I am well annoyed with the series so as not to go further. Given the passing of the author, an author that I’ve read for many years, I write that with regret, pain and reluctance.

The audio narration for both books is well done and the books flow well. Characters are well voiced and distinguished within particular scenes. I did notice a couple of characters, separately widely across the series, did (unintentionally I think) sounded similar but I never was confused as to whom was whom. I attribute this also to the easy flowing writing. On a sentence and paragraph level, the book’s writing does bring the reader flowing through the book.

Readers who can look past the faults that I found in it, and want a world-tripping story where an unlikely ordinary guy finds himself in strange and sometimes very clever fantastic worlds will enjoy The Master of Dreams and The Mistress of Illusions. The by-line writing, description, immersion of the character and the game of the reader themselves trying to figure out the scenario has appeal and interest for a stratum of readers, I am sure. I personally think that there are many other and better Resnick works to try besides these.

Bonuses: +1  Inventive worlds that the main character is catapulted into for much of the two books.
+1 for good representation in the books.

Penalties: -1 for seriously wavering payoffs  at this point in the narrative
-1 for a loss of consistency in the worldbuilding that undermines the entire story.
-1 for the lack of anything approaching character arcs or development

POSTED BY: Paul Weimer. Ubiquitous in Shadow, but I’m just this guy, you know? 2020 Hugo Finalist for Best Fan Writer. @princejvstin.
Posted by Paul Weimer at 12:00:00 AM