Microreview [book]: Seven Devils by Laura Lam and Elizabeth May

A thought-provoking, pedal-to-the-metal space opera with characters to root for. 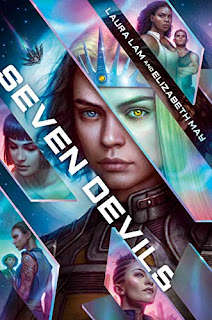 Eris,a fierce soldier for the Novantae resistance to the vast and oppressive interstellar Tholosian Empire, has a secret that only the higher ups in the resistance know: she once had a very different life. Once she was Discordia, the putative Heir to the Empire, a woman who became as bloody handed and bloody minded as her brothers in the competition to be her father’s successor. She left that to join the resistance, and is teamed up with Cloelia, who doesn’t trust Eris for pretty solid reasons even above and beyond her prior life. Eris and Clo’s latest mission brings their attention to three individuals fleeing the Empire--and a plot that could kill millions on both sides of a long running war.

The story of Eris, Clo, and the other members of the resistance facing off against the Empire’s dread plan is the heart of the story of Elizabeth May and Laura Lam’s Seven Devils.

Let’s start with the main question: Does the novel smash the Patriarchy? Oh yes, yes it does. The novel has lots to say about autonomy, the rights of women, freedom, authority and male systems of control. It does this on a character level, showing how Eris/Discordia twisted herself into the system to produce an Heir, conforming to the expectations of her father. We also see Rhea, whose sexuality and sexual nature were used and abused by her captor, and Ariadne, who until recently had no real autonomy of any kind. The Empire is a masculine and male power structure and that alone makes it worth taking on. It is not exclusively that, however: it is a controlling, grasping entity that's clearly depicted as an overwhelming force of oppression and control. This is especially shown with the Oracle, a supercomputer AI system of controlling soldiers and even ordinary citizens in a very oppressive fashion.

The novel is full of classical and ancient historical allusions. The bit about Eris once being Princess Discordia works even more when you know what Eris was Goddess of. The Novontae were a tribe of Picts who clashed with the Roman Empire, mentioned in the Geography of Ptolemy. Tholosian comes from Tholos, a type of central plaza building in the Greek and Roman world. Clo (Cloelia) is named for an legendary woman from early (age of Kings) Roman history. And on and on. You can have a lot of fun of “who or what is this named for?”. The fact that the authors didn’t simply do a riff of classical names and instead have chosen them very carefully to suit just makes it all the better.

The novel’s structure enhances and works well with the themes and the plot. The points of view are mainly Clo and Eris, with a few POVs from Rhea, Ariadne and the third of the Refugees, the warrior Nyx. This variety of points of view gives an excellent rounded approach to all of these characters and how they work, but the secret sauce that the authors bring are the flashbacks. Thematically or plotwise tied to the present day action, again and again the novel will switch to a point of view sometime in the past. These points of view give all of the characters a chance to be seen before the events, and give context to the events in the present day. It’s a way to establish character, provide clarity for the present, and thus provide growth.

The meatiest of these flashbacks is Eris/Discordia, since there is a question that the novel only really answers toward the end: why would the Heir to the Empire, a bloody handed woman playing the game of the patriarchy extremely well, turn against the Empire, and how? The how and the why of this heel-face turn is the central character question, and maybe the central question and theme of the novel. Grokking Eris' story, her pain, her power, and her journey is the key, I think, to understanding just what this book is doing.

I loved the variety of Seven Devils in terms of skills, knowledge, weaknesses, strengths, and how their relationships around each other weave, grow, and change. Discordia/Eris is the A-class star in this firmament, but how could I not feel for Ariadne, the cinnamon roll technical genius prisoner living all of her life, alone? Or Rhea, trapped as a sexual plaything seeking her freedom. Or Clo, a scrappy mechanic pilot with a mechanical leg who will just not stop trying to do the right thing. There is a character here for everyone, and there are also tentative moves toward a romance between two of them, showing a light of hope and joy in a dark and turbulent narrative.

To that point, the novel hits the pedal early and hard - with an opening sequence that reminds me of the Black Widow - and only pauses for breath when necessary. This is a novel with a lot of action and adventure beats; the downtime elements are there to let a reader recover just enough to be ready for the next bit. The aforementioned use of flashbacks allows the authors to pair an action sequence with a quiet moment, and to vary it as to when and where that occurs in the narrative. It’s hopeless to try and figure out where one author or the other may have written a passage, it is smooth gear shifting like in a well tuned racing car. I was never bored. In fact sometimes I had to slow down my reading because it can be an overwhelming rush to engage with this book.

About the only thing I didn’t like, because it niggled at me all the time, was that there was a tad too much handwavium of some of the technology. The technology of a novel like this is firmly Not the Point, and most readers, I think, are not going to care, but I found myself too often wondering about how some of the technology actually works at an interstellar, and nearly intergalactic scale (and that is of a piece of the handwavium: a spiral arm, to say nothing of whole galaxies, really is huge, larger than what this novel fees like).

The novel is in many ways a pilot double-length episode of a TV series that sets up the characters, gives them an imminent and big problem and sets up the board for many future adventures; it is not much of a spoiler to reveal that the Empire is not toppled in this book. The plotting is done well enough that I didn’t feel cheated that there is potentially much more to come from the titular Seven Devils. They are, in a real way, only getting started by the end of the book. With the team set up for more striking at the heart of patriarchal empire, I definitely want to see more from Lam and May in future books.

Bonuses: +1 for a strong set of central characters with stories, arcs, passions and tensions that really come alive even on this huge canvas; +1 for riveting action and adventure beats that keep the pages turning.

Penalties: -1 Some discordant elements of the worldbuilding niggled at me.