Microreview [Book]: King and the Dragonflies by Kacen Callender

A story that expertly tackles a number of topical issues and adds a dash of magical realism to create something sublime. 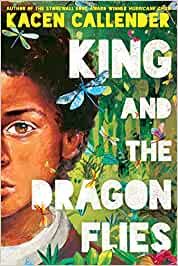 In many ways, humanity is similar – made from the same fabric – yet the times have found ways to knot our fabric up into warring sects. Our nuances override the potential kinship of our shared fundamentals. Some cultures have been raised more so than others to perpetuate racism, homophobia and stoicism, setting up a sort of dam that blocks opportunities for acceptance or cathartic tears. King and the Dragonflies is centered around that fabric, and through a story of love and understanding, tries to unknot our shared cloth, and should make some readers a little more well-rounded than they were before opening the book. It’s marketed as middle grade, but like some of the most special works in the genre, has the potency and perceptiveness to stand shoulder-to-shoulder with any novel.

King and the Dragonflies follows King, a boy whose older brother Khalid recently passed away. At Khalid’s funeral, King sees a dragonfly, and becomes convinced that his brother has taken the form of said insect. Meanwhile, Sandy, one of his best friends came out as gay to him, and he’s been ostracizing Sandy for fear of going down with him in homophobic humiliation. But there’s something more to the situation – both in terms of his brother’s involvement, and King’s personal feelings to the matter, which I will not spoil.

King is Black, which is vital to the story, as both racism against his people, as well as homophobia carried by a portion of the Black community is explored. The novel presses the paradox that the racism Black people experience and fight against is comparable to the level of hate and narrow-mindedness exhibited by homophobes, and yet Queer and anti-racist movements aren’t always interwoven. That contradictory dichotomy is heightened when Sandy, who is white, meets head-on with the traditionalist Black teachings of King’s family. And it’s heightened even more when Sandy’s family – including the father who is the sheriff of the town - has a besmirched reputation of being blatantly racist.

There’s so much emotional suppression in King and the Dragonflies, in which what characters say often oppose what they think. But the novel takes King and some of the supporting characters on a transformative journey, in which they become comfortable with what they keep hidden, until they no longer feel a need for suppression. If the novel starts out with a obstruction that blocks out translating thoughts into action, each page turned in the book moves the characters progress a little bit forward and gnaws on that obstruction, until a close approximation of liberty is granted.

For those who enter the book with the expectation of a lot of speculative fiction elements, you will be disappointed. The book is very loosely magical realism, with Khalid’s alleged transformation into a dragonfly being the most prominent fantastical element. The story later builds on the premise of time and space being fluid, and without spoiling anything, it ends up eclipsing the dragonfly as the most salient fantastical element and the greatest symbol of King’s grief and development.

The fabric of our world could be so smooth, in which prejudices are flattened out into indistinct fallacies. But instead, our world is a patchwork, with threads frayed off and inaccessible to others. Some patches are rough to the touch and seem to have no way of mending. But there are some pieces that are detached but capable of threading into more fabric. King and the Dragonflies speaks to readers, both of the middle grade and adult age, of how to weave into areas that you were ignorant of. Even if a dragonfly doesn’t grace you with its beauty and land on your fabric, you have comfort knowing that you’re attached to even greater things.

Bonuses: +1 For covering incredibly heavy topics with full-forced depth while being accessible to a middle grade readership.
+1 For insightful and incisive observations and emotional depth.

Negatives: -1 For an ending that ends a little too conveniently and quickly.