The Seventh Perfection is a fantasy story that tries something uniquely demanding. To some, it will look like a gem, while others will see it as rot. 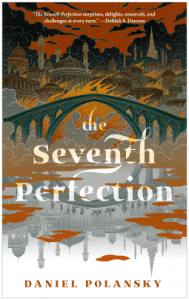 Sometimes it feels like society moves in zigzags, and we’re following its path under the false belief that we’re going straight. The world is fueled by greed, power, and misinformation to dictate and change how people think. Many people are empty vessels whose opinions and alliances can alter instantaneously with just a little push. And our biggest burden is our own mind, with its faulty memory. At our worst, we become porous vessels that those in power can fill with love or hate, until it all leaks out from forgetfulness, and the powerful fills us with a new thing to be preoccupied and driven by. The Seventh Perfection tackles those flaws in an experimental way—an inventive writing style that is incorporated to support its themes but might be a bit too experimental for its own good.

The novella follows Manet, an Amanuensis (a person who dictates a manuscript) for the God-King, the supreme leader of the land. What makes Manet special is that she has a fantastic memory and dictates conversations mentally, rather than dictating it with ink. One day, she receives a locket from a mysterious force. The locket contains a picture of a woman who looks suspiciously like her yet isn’t. This propels her on a quest to investigate who exactly the woman in the locket is, while in the background, an increasingly illuminating light is shed on the world around her, as the reader gets a better and better glimpse of its dark underbelly.

That sounds simple enough. But there’s one thing I didn’t mention: the protagonist’s dialogue and thoughts are not included in the novella (with the exception of one chapter). We hear the person she’s talking to, and it's implied what she says through how the characters respond to her, but it’s never written out. To say that there’s a learning curve to the writing style is an understatement. Not only is the character initially portrayed in the story as a cipher whose background is explored by other characters' responses to her - many of whom she has just met – but the history of the fantastical world is unraveled in this fashion, too. Thus, the first half of the novella feels like solving an unsatisfying puzzle. But in the second half, things come together at the same time the story becomes propulsive and is an improvement of a read.

Thematically, this style works because the novella is about how the people who don’t have their guard up are the sum of what those in power instill into them. It proffers that we’re not the sum of our individuality, but instead a stew of ideas that come from forces outside of us. Which is why its clever for a character’s story to center around not what she says, but what those around her tell her. However, in terms of craft, it’s a little less satisfying. Reading one half of a conversation is bound to be confusing if the dialogue was written organically, and Polansky understands that, modifying his style accordingly. Thus, characters speak a little more artificially to get their message across, by sometimes repeating what the protagonist said but as a question, or overexplaining things more so than seems human, to cover for the gap in dialogue. It works the best for the novella’s idea, but I can’t deny that it’s clunky at times.

Despite the dialogical limitations, it’s amazing how much character development Manet is given, despite the book barely containing a word she says or thinks. Manet lives in a world of porous humans, but she’s able to act more like a sponge than most, thanks to her memory. While most of the story's cast would’ve been swayed or even forgotten what they were fighting for halfway through their journey, Manet plows through her investigation with tenacity. But with society largely opposed against her lifestyle, her grasp of individuality is flimsy. In Spider-Man, Uncle Ben said, “With great power comes great responsibility,” – but The Seventh Perfection showcases great power struggling to shift the status quo that can move you into a place worse than where you started. Great power is a burden when a massive collective is tricked into thinking you’re using it for evil. Sometimes a fight against the societal current seems so bleak, that the most responsible thing is to submit and not use your power at all.

The Seventh Perfection is an exhausting read, both in terms of its themes and the level of work it demands to fully understand it. But by exerting yourself through a vigorous read, the benefits of absorbing the story feels so much more satisfying and potent. It might even be potent enough to chew on and savor the themes, rather than throw them away if they took the form of a trite, mediocre story. Reading the book is like a one-way conversation, in which you, the reader, are silent while the book is speaking to you. And hopefully, just like Manet, you will absorb important information without having to write down any notes.

Bonuses: +2 For being wholly original.

Negatives: -1 For having a writing style that, while unique, often necessitates clunky dialogue.
-1 For a confusing, slow start that throws you a little too deep into the deep end.