Microreview [Book]: The First Sister by Linden A. Lewis

A grim but effective tale of interplanetary conflict and societal loyalties 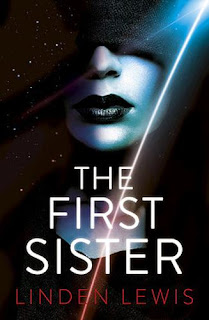 The First Sister opens on a solar system at war between the Icarii, humans who live on Mercury and Venus and have harnessed advanced technology based on a mineral that's only found there, and the Geans, who claim Earth and Mars and rely on scavenged tech and a radicalised religious population to maintain their own strength. With poverty and inequality rife in the societies of both sides, two very different individuals are thrown into the war for their own survival, and both have their already fragile loyalties tested as they start to uncover the reality behind the structures that govern their cultures.

The first of these characters is the titular First Sister, who serves on a ship as part of the Gean's religious order, and is effectively a comfort woman for the soldiers who use her to confess their sins and are then entitled to her body. The Sisters undergo an ambiguous procedure which removes the memory of their names, and prevents them from being able to speak; even the title "First Sister" is a transient one, a position which she has won by ingratiating herself with the captain of her ship; if she loses the position, the protagonist would go back to being completely nameless. Because of her rank,  First Sister has made herself exclusively available to the Captain, winning herself a reprieve from sexual assault from the entire crew, but at the opening of the book her former Captain leaves, breaking his promise to take her home with him, and she is forced to try and build a relationship with the unorthodox new captain, Saito Ren. It should be noted that while the threat of rape hangs over First Sister due to her position, and she euphemistically mentions a couple of past assaults, there are no depictions of rape or anything more than brief unwanted physical contact during the story's present.  There also aren't any instances where "safe" characters suddenly turn on her for shock value. Lewis does an effective job building up the horror of the Sisterhood and what they are expected to do without having to resort to the shock value of actually depicting rape, and I'm grateful to the book for treading that line so effectively.

Providing the view from the Icarii side is Lito Sol Lucius, a man from a poor family on the Venusian city of Cytherea who has risen to become a duelist, training at an elite academy to become one of the Icarii's Special Forces. All Icarii soldiers are given neural implants and in the case of the duelists, they are paired with another soldier, one becoming a "rapier" and the other a "dagger", both playing slightly different roles in their missions with the rapier given tactical command. Lito has recently lost the dagger he was paired with, Hiro Val Akira, after a mission on the contested asteroid Ceres; now it turns out that Hiro is not dead but that they may have defected from the Icarii, and Lito is given a new partner and charged with tracking them down. Interspersed with Lito and the First Sister's chapters are "recordings" which it quickly becomes apparent are from Hiro's point of view, as they recollect the events that led to their disappearance, as well as their own family history as child of the dynasty which created the implants and much of the other technology that makes Icarii society function.

The First Sister sets up a grim world, where at least for the first few chapters its hard for us to think beyond the characters' survival. This is particularly true for First Sister, whose distress at being abandoned and put at risk of losing her tenuous sense of security is incredibly hard to read. However, as the characters start to get a little more comfortable in their circumstances and find the space to start questioning broader elements of their situations, things start to get juicy very quickly. The relationship between First Sister and Saito Ren, while uncomfortable in some of its romantic elements (this isn't a romance plotline, just to be clear, and those feelings seem to be largely one-sided), sets up some really interesting questions about Ren's history and current views; equally intriguing are the glimpses we get of the Sisterhood, and the motivations of the Aunt on the ship who attempts to use First Sister to gain information on the captain. As Lito is less confined, it is through him that we see some of the wider world of The First Sister, including Ceres - which has recently changed hands from Icarii to Gean control - and the Asters, a culture of humans who have undergone extensive genetic modification to live in the less habitable parts of space, and are now considered a separate species and constantly discriminated against in Icarii society. Both characters' positioning is effective in showing the war crimes and oppresiveness of their respective societies, from the horrors of the Icarii neural implant process, the threats made against Lito's families, and the treatment of the Asters, to the normalisation of sexual slavery in Gean religion and the secretive, misogynistic nature of the power structures behind it.

After an uncertain start, I was intrigued enough by the character-driven mysteries of The First Sister that it kept me reading very effectively. Being the first book in a series, the climax of this novel answers some questions, but it leaves the character arcs hanging to some extent, particularly when it comes to a reveal around one specific character which upends a lot of what we thought about them throughout the book. In a way, both First Sister and Lito achieve some of their initial goals, only to have the realities of the world they live in make those goals far more complicated than they first thought. It's an odd climax in some ways - that character reveal mentioned above didn't do much for me at all - but satisfying enough for a series opener even while I might have preferred some more closure for the amount of emotional turmoil some aspects of this story put me through. That's probably me expecting too much from grimdark adventures though - and if you go into this expecting that to be the case, I think you'll enjoy it just fine.

Having noted above that I think The First Sister deals sensitively with the sexual violence inherent in its premise, I was much more disappointed with its depiction of disability, which comes across as much less thought through. One of the defining characteristics of the Sisters is that they can't speak, due to the mysterious operation conducted on them when they enter the sisterhood. They have a sign language, but knowledge of this is restricted to the sisters themselves and their Aunts, and writing is considered taboo, meaning that there is no way for First Sister and her kin to communicate with the soldiers around her. This inability to communicate freely with the sisters she doesn't think she can trust and the Aunt who is actively putting her into a dangerous situation is an effective part of the book - but it's done in a way that minimises the role of sign languages as complete, useful languages in their own right. There's nothing to suggest that the sign language that the Sisters use is incomplete or limited in vocabulary, but even in the opening chapter First Sister laments that it's their "only" language. More frustratingly, a late plot point involves some sisters regaining the ability to talk, and these characters immediately express relief and jump to using spoken communication even though they already had the ability to sign and mutually understand each other. What starts out as a rather on-the-nose symbol of the Sisters' powerlessness becomes tied up in an assumption that sign languages are an inherently lesser form of communication, and that's an inaccurate and deeply unfortunate portrayal given the number of people who use sign languages either exclusively or alongside verbal communication and most certainly aren't "voiceless" in any metaphorical sense.

That aside, The First Sister is a book that's highly effective in telling the story it wants to tell - and it's a story that I found myself drawn into despite not initially being convinced by its grimness. While I'm reserving my full judgement to see how things play out in later books, this is a story that's got a lot of interesting places it could go and, linguistic ableism aside, I'm intrigued to see what First Sister, Lito and their friends get up to next.

Penalties: -1 An ending reveal that didn't really do it for me; -1 Throws sign languages under the bus for the sake of its metaphor around "voicelessness"