A fluid sci-fi mystery that offers moments of brilliances for both the future of AI and humanity. 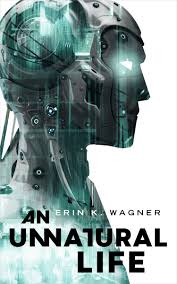 Life is changeable and elastic for the lucky ones. Obstructions can be molded for their benefit. Laws are twisted into an effigy of what they once were, but it doesn’t matter to those in power, as long as they can reap more benefits from it. Even planets and moons that have a different calendar than ours will bend before the dominant's conquest, as they find ways to circumvent things, developing artificial lights to create the exact length of an Earth day. An Unnatural Life tackles the issues and contradictions of colonizers by facing them with those elements, along with a new threat: artificial intelligence.

A murder has been committed on Europa, allegedly by a rogue AI named 812-3 against a human. Aiya, a human and lawyer is asked by the AI for an appeal, claiming he’s (Aiya identifies the AI as male) not guilty. Unfortunately, there are no laws for AIs on Europa, so when Aiya takes the case, she forges a precedent that could not only acquit 812-3 but leave a long and lasting impact for all AIs on Europa. Things become heated, as it becomes increasingly clear that most humans deem artificial intelligence as lesser beings and thus deserving of the brunt force of the law. That's just one of the ways on Europa that AIs live An Unnatural Life.

While the power structure’s absorption and consolidation of norms is the most prominent theme in the novella, the book also takes a good luck at fidelity, whether it be romantic or otherwise. There is a forbidden romance in the story, and without spoiling anything, it echoes how the powerful, when in a relationship with a less advantaged person, is purged of any guilt when things go awry, as all the ire is targeted toward their partner. As for the less romantic fidelity: all people on Europa must be paired with a partner--the partnership doesn't have to be romantic. Aiya is paired with Pari, a woman whose friendly tie with Aiya becomes increasingly frayed while Aiya receives more blowback for building and bolstering AI rights. I found this relationship to be the one of the most engaging, as the rapport is adeptly established early on, making the dissolution of it more painful. But the most engaging dynamic is the eccentric voice of 812-3 bouncing off the more conventionally logical Aiya—it’s the crux of the novella and the story is better for it.

Unfortunately, those winning character dynamics don’t extend to Aiya’s interactions with tertiary characters. That’s partly because their conversations are rushed as quickly as the human’s repulsed reaction against societal cracks, but also because I found many characters to be underdeveloped. Very quickly, the tertiary characters are established to have one characteristic, and everything they say afterwards is in line with that single characteristic, without ever expanding in breadth.

But my biggest gripe with An Unnatural Life is that it misses opportunities that prevent it from breaking out into something inventive. It lays the groundwork for showcasing an original bent on the injustices inflicted on AI as a proxy for injustices inflicted on human minorities, but it fails to extend as far as it could be. Its unfulfilled achievements are like a reaching arm that tires before it fulfills its grasp. Added worldbuilding and character development would’ve turned a good story into something truly special.

An Unnatural Life has a lot of pre-established moldings of the genre: subjugated AIs, a sci-fi courtroom drama, cybernetic organisms mirroring minorities—but there are moments of brilliant originality. Moments when it stretches out of its molding and strives to be something greater. By the end of the novella, it’s fair to say that humans should show common decency to all beings and give them more space to explore and develop individuality that’s relevant to their culture and not be part of a conglomeration of their dominance. Trapping them in norms when they should expand into idiosyncrasies is a shackle that robs them of further potential and vivacity. The same outlook could be attributed to the growth of this story.

Negatives: -1 For an ending that doesn’t live up to the engaging buildup.
-1 For not having enough worldbuilding to fully immerse you into the story.