A story that throws a lot of things at you, almost all of them good. 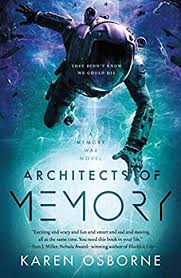 Architects of Memory is a good kind of paradox. Its story links a degrading sense of self, the greed and depravity of humanity, and lofty misunderstanding to create a fiery conflict. Things don’t go well for the characters when multiple concepts are intertwined in that world. But on a craft level, the novel intertwines space opera tropes, a few inventive twists, fully-formed characters, and a perfectly paced structure to create a glowing achievement. If only the characters' travails mirrored the writerly utopia that transpires when Karen Osborne’s typing away.

In Architects of Memory, Ash Jackson is indentured to a massive corporation, and she must work to attain freedom. Upon her work, while on a spaceship with a motley crew, she encounters a mysterious object that has to do with her dark past and humanity’s conflict against an alien race. To compound matters, she also has an illness that could cost her freedom and impair her abilities. And to escalate the situation further, she’s in a secret relationship with a member of her crew.

The beginning of the novel mostly takes its time organically sliding in worldbuilding and pieces of the plot. To those new to sci-fi, it may be jarring with the amount of information it throws at you right away, as well as putting you in the middle of the action with relationships preestablished, expecting the reader to catch on. Things do click into place, and it’s well worth the effort.

Upon the one-quarter mark, the story swivels directions, goes into lightspeed, and propels through twists and action, mostly knowing when to momentarily hit the brakes and give you a breather. Reading the novel is like riding a spaceship piloted by an apt daredevil. Even the times in the ride when the story hits a wall of exposition, I never felt like I was mired in boring, sludgy plotting because the afterglow of the thrilling scenes that preceded it left me at a high. With that said, feelings are subjective, and those averse to any blatant scenes of the expository variety might feel different.

The most singular talent of Architects of Memory is finding a new bent on a space opera story—a genre that’s been well-trodden so thoroughly and covered in footprints that it can seem impossible to find a patch of your own. And while Karen Osborne does steps on patches that have been stepped on by seemingly every sci-fi author, there are idiosyncrasies to characters and twists regarding alien life that more than make it fresh. While characterization isn’t at the top of the novel’s mind, it does do a much-more-than-serviceable job of establishing believable motivations and ample depth to keep you caring.

But the greatest joy of Architects of Memory lies in its plot and the themes they develop. Whether it tackles individuality and collectivity, the belligerent survival instincts of humanity, or relationships in secrecy, it lays the foundation for those themes and builds upon them, never leaving them underdeveloped along the way. The most intriguing theme is how memory is so tied up with our sense of self. We’re a collection of the knowledge we accrue and the relationships we build, but without memory, those things slip through our fingers like sand. Love can change from everlasting to a brief sensation. Familial bonds that we preoccupy ourselves with if the world around us is rotten becomes lost if our memory – our personal storage locker that tethers all our meaning – is gone.

Space operas can sometimes be so unwilling to take risks and stray from conventions that they’re forgettable. Stories that have edifying substance don’t matter if they immediately leave our memory. The best way to counteract that is to have original characters, and hard-hitting themes despite how well-trodden some story beats are. Architects of Memory does that. Its craft, emotional intelligence, and smooth writing style work to create a gem that will be at the top of my mind for a long time.

Bonuses: +1 For expert pacing, especially in the wonderfully frenetic latter half.
+1 For a great portrayal of an alien race.

Negatives:
-1 For an ending that could be a little better.