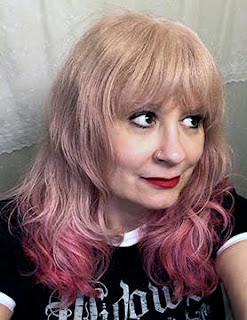 Stina Leicht writes science fiction, horror, and fantasy. Her next novel, Persephone Station is a Feminist Space Opera scheduled to debut 5 January 2021 via Saga Press. She was a finalist for the Crawford Award in 2011 and the Astounding Award for Best New Writer in 2011 and 2012. She has also written four Fantasy novels: Cold Iron, Blackthorne, Of Blood and Honey, And Blue Skies from Pain. Currently, she is working on another SF novel titled Loki’s Ring due to be published in 2022.
Today, she shares her 6 books with us:

How Long ’til Black Future Month? by N.K. Jemisin. It’s a masterful short story collection that ranges from Steampunk to hard SF. Great stuff. Read it!!!

Maria Dahvana-Headley’s Beowulf translation. No woman has ever had their translation of Beowulf published before. Translations are very much affected by the person that translates them. I understand this really affected the interpretation of the story. I’m so very looking forward to it.

Terry Pratchett is my go-to when I’m stressed. Needless to say, I’ve been re-reading a lot of Discworld lately. (Oh, Covid-19. When will you finally go away? Heh.)


4. How about a book you’ve changed your mind about—either positively or negatively?

When I was a kid I read John Christopher’s Tripod series. The whole thing about kids being the only ones free to think for themselves really appealed to little mousy me. Sometimes I pick up books I loved and re-read them. I did and holy shirtballs, that one absolutely did not hold up at all. It’s so sexist for a start. It’s also badly written in general. I couldn’t even get through it. Just wow.


5. What’s the one book, which you read as a child or a young adult, that has had a lasting influence on your writing?

I’m going with Something Wicked This Way Comes by Ray Bradbury. Bradbury’s prose was the first to blow my mind. The story was amazing and his command of his craft top notch. The older and more experienced I become as a writer the more impressed I am. I don’t believe I’ll ever be as good as he was. But you know what? One can always try anyway. It’s good to have goals.

My next novel, Persephone Station, is scheduled to debut in January of 2021. That seems forever away, really. Soooo… this whole thing starts with sexism in the movie industry and Geena Davis. During the 1970s a great deal of progress was made in getting more roles for women. Sadly, in more recent history to number of women’s roles in cinema have been shrinking. (There’s a regular report on the statistics at https://seejane.org.) The problems with sexism don’t end at the Bechdel Test—particularly if there are no women in the film at all. Anyway, I’m an Akira Kurosawa fan. One of my favorite things to do is pair up one of his movies with the American/Italian remake. For example: The Seven Samurai and The Magnificent Seven. So, when the 2016 version came out I was extra sensitive to the fact that the only woman in it is the romantic interest/helpless waif. Hey, if you’re going to remake a movie—remake it. So, I thought I’d write a gender-flipped version with women of color and zero romance. Look there’s nothing wrong with Romance. However, media about women almost always contains a relationship. The number of stories where the Win-scenario for a female character is not a romance is almost zilch. It’s so bad that any series with a woman on the team inevitably winds up with the woman sleeping with her coworkers. Every. Time. That just doesn’t happen all that often in real life—not compared to the number of times women DON’T sleep with coworkers.

You know what? Women need adventure stories too, damn it. Particularly older women.

Persephone Station is the book I wished I’d read in my twenties or thirties or forties. If I need stories of women doing things while not giving a shit about whether a man loves them, other women must need this too. So, I did. And I had so much fun writing this book. I really did. It’s a military action adventure in space. Women working together, being competent, and being good friends.

And no one sleeps with their coworkers.