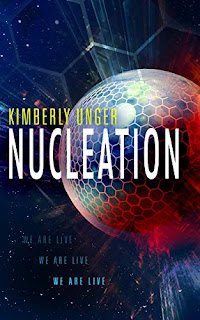 Those are the tag words for a VR pilot of a waldo to let their handlers know that the connection is good and they can get down to business. Helen Vectorovich knows them well as one of the best VR pilots in the business. But when a project to construct an extrasolar operation through a micro wormhole kills her NAV (navigator), it seems that the fact that there may be aliens on the other side is the *least* of Helen’s problems.

This is the story of Kimberly Unger’s Nucleation.

First Contact stories are a staple of SF. First contact in space, on alien planets, through portals, via radio and other signals. There are many changes to ring on that concept. I confess that the idea of a VR pilot making first contact via the waldoes they control is one that I had not thought of, and while, like everything, surely someone has thought of this before, it still is stunningly fresh and interesting. The author goes an excellent job with the fog of war that a first contact with the means at hand  that we have here--using telepresence robots to contact what appear to be the alien equivalent of the same. This cunningly allows the aliens to both be inhuman and not rubber forehead aliens and yet at the same time having a common basis that could allow the first contact to be more than an incomprehensible

The tech of the VR is another highlight. The author’s dayjob and long experience with tech really come to the fore here, and the novel is chockablock with it. This is a novel that understands current technology, sees where it is going and presents a future VR experience to the reader that feels like it’s 20 minutes into the future. Waldos in SF are as old as Heinlein. What Unger does here with them is to really link in and key in on the user experience, the user delights, joys and potential hazards of using the technology at very long distances. The robotic future of space travel that we seem to have gotten instead of the manned version imagined by SF writers in the 20th century gets a real examination here. Unger marries this with a 21st century understanding of how corporations and corporate power will be on that frontier and using that tech--where they will cut corners, where they will be forced to innovate, where they will conflict and clash with other corporations. There are notes from the world of Cyberpunk of corporate predation, but it feels more in line with our own present (again, the author’s personal experience really leveraged here)

The novel goes even more speculative in having the waldos going extrasolar (via wormholes), having some kinds of artificial intelligence and envisioning a future where waldoes might be used to mine asteroids and other objects. The author doesn’t spend a lot on this tech itself, just how the wormholes work or how that came to be isn’t the focus of the novel. The premise of extrasolar exploration via robots, with micro wormholes used to put those robots into other systems is the gimmie here. It is how they are used, how the operator (like Helen) controls and operates them, how their handlers monitor those operations is where the meat and potatoes of the tech and its implications lies. I wanted to know more about it, but knowing more about those on a technical level aren’t essential to the core story.

The novel provides a well rounded and very human protagonist in Helen. She’s our sole point of view, which can be a bit awkward at times and the author goes through some pains to make sure she is witness to some important events and there is just the slightest bit of shoehorning. It’s not a real defect of the novel, merely a consequence of that tight on person point of view. The author leverages this in all sorts of ways in putting us in Helen’s head and giving us a perspective for us to try and “figure out” along with Helen just what machinations, aside from the potential alien contact, are going on. She makes for an appealing and immersive character whose triumphs, successes, and boundary pushing all feel very natural and real.

If there is a real weakness, I think that a couple of the elements of the technothriller beats don’t quite come off quite as well as the rest of the narrative. The plot points and the story beats come along great and propel the plot, but whenever the focus shifts too far away from the VR experience or the experience within Far Reaches as a campus, the novel loses a bit of its steam and power. This may well be because the technological experience and grounding of the main line of the novel is so vivid, strong and immersive that when Helen is out of that environment, the novel loses a half step.

Nucleation ends most satisfactorily and with a good solid ending, but there are clear lines for potential sequels and follow ups. First Contact, after all, is just the beginning of a story involving human-alien relations. I am interested in seeing where the author goes with the story from the ending of this novel, and hope the strengths here can be leveraged further on with more of Helen’s story.

Bonuses: +1 for an unique spin on a first contact story
+1 for immersive and detailed SF and tech elements with the virtual reality gear that really shows the strength of the author’s knowledge and lines of invention

Penalties -1 for some of the technothriller elements outside of the core setup not being quite as brilliant as the central elements.