The author’s talents for complicated space opera with interesting characters translates wonderfully into secondary world fantasy beyond the Great Wall of Europe. 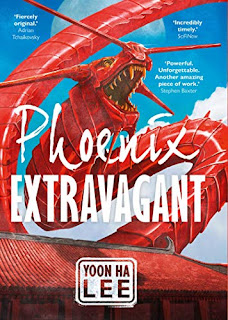 Gyen Jebi has a problem. In their occupied homeland, an artist like themselves has a hard time finding a job or steady work and not being dependent on his sister. Dire circumstances causes them to go to the conquerors, the Razanei, for potential employment. Jebi (or Tsennan, as they also have obtained a Razanei name). A series of events lands them in the Ministry of Armor, painting symbols on that control and animate an automata dragon. As they work at his new job, Jebi finds themselves in conflict with his sister, his heart, his conquerors, and his desires to try and free Arazi, the aforementioned  dragon.

These complicated threads of character and story are central to Yoon Ha Lee’s Phoenix Extravagant.

The story runs and runs cleanly and excellently on the heart and soul of the characters and how they interact and collide with each other. Jebi/Tsennan is our center and our point of view character throughout the novel, giving us a newbie-perspective to the world of the Ministry of Armor as well as being a plot driver when they (Jebi uses they/them pronouns) decide to take drastic action. Jebi’s sister Bongsunga is definitely dreaming of the Hwagugin reasserting their control over their land (which has been named Administrative Territory 14 under the Razanei rule) . Hafanden, deputy minister of Armor, and really the person with the “Boots on the ground” in Hwagugin, has dreams of making the automata dragon, Arazi, work again after the previous person in Jebi’s position failed...although how is not immediately clear to Jebi. There seems to be a mystery about that. And then there is the Prime duelist for Armor, Vei, who winds up having a complicated relationship with Jebi, and has unclear ties to Bongsunga and Hafanden as well. It’s a rich brew for drama and character that the author works masterfully into the narrative, plot, and world.

The world that Lee presents is a secondary fantasy world that is as rich and interesting as the Machineries of Empire. It’s a realm much like our own Korea, with the Razanei standing in for Japan. The worldbuilding notes, contexts and worldbuilding notes, from the use of language, positioning, family structure, art and culture definitely all reinforce that and the novel sits proudly in the tradition of authors like RF Kuang and Fonda Lee in imagining a fantasy world firmly grounded in East Asia as its cultural base in a way that much fantasy has Western assumptions and baselines. Using early modern Korea as the base of their world (in addition to the aforementioned dragon, there are mentions of things like tanks) allows the author to investigate and interrogate a lot of colonial themes and ideas. Not only is the Razanei imperial aggression explored, but in the same vein as the words of Kuang and Lee, it is the “west” that is distant, mysterious, threatening and meddlesome. These three authors now, and other upcoming authors, are using the experience of Western imperialism as an inversion of the “mysterious and inscrutable east” trope that unfortunately ruins a lot of fantasy fiction that has an East at all. It’s more than high time that some of the legacies of 19th and 20th century narratives in terms of the West’s cultural and physical imperium over other parts of the world are addressed and used in fantasy fiction in a nuanced and interesting way, and the author rises to that challenge.

The other interesting part of the worldbuilding, and it also goes that cultural imperialism, is how the magic works. As Jebi learns when they are put to work in the Ministry of Armor, the painting and delineation of magical symbols for automata requires extremely special inks (the title, Phoenix Extravagant is one such ink). The horror and the for me painful aspect of this is that the magical inks are created by the destruction of works of art. In order to create the controls for these weapons of war, beautiful works of art must be destroyed. This makes a tension throughout the novel, as Jebi is additionally aware of the damage that they do, even as they come to form a bond with Arazi, the Dragon.

And finally, the writing is just vivid and beautiful. As noted above, this is a novel about art and the uses of art, and the book itself channels the power of that art--but the art of writing and vivid writing that immerses you into the characters and the world. The pain and striving of Jebi to find a place in the world, life under the rule of the Razanei, and finally, the dragon, Arazi, come to extraordinary life. Readers of the Hexarchate novels who want to follow Lee into fantasy are going to find a lot they loved in the sheer writing power there, here in a fantasy format. The plot and situation are more streamlined than the Machineries of Empire. There is plenty of intrigue, revelations, characters set against each other and conflict, but readers who might have thought the Hexarchate a world too baroque for their tastes might find the world here more accessible and relatable.

With these heady themes of art, colonialism, power, subjugation, revolution, family, love and more, Phoenix Extravagant is a strongly depicted and rich novel. It’s not heavy on action, although there are conflicts, it is a novel where the theme comes through the strongest. It's a stunning change of genre for the author, and one that excellently works. Phoenix Extravagant takes its place alongside the works of other authors exploring fantasy in a new and fresh way, and I am very happy to commend it to you.

Bonuses: +1 for a strong and resonant story and theme for our times.

+1 for an interesting world using an East Asian template that is refreshing, diverse and enthralling

+1 for vivid and excellent writing.

Penalties: -1 The strong focus on theme might frustrate readers more interested in the other fundamentals of the novel.