What if Stranger Things and The Exorcist had a child? A book child. 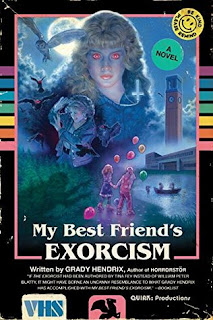 Grady Hendrix is probably best known for Paperbacks from Hell, a nonfiction tribute to the outlandish and fun world of horror novels in the 1970s and 1980s. But he's also an accomplished horror novelist in his own right. My Best Friend's Exorcism is, in essence, Hendrix's attempt to write his own "paperback from hell" - an endeavor you might expect to go the full hipster route, complete with all the winks, nudges and avalanche of pop culture references that weigh down similar exercises, like Ernest Cline's Armada. Credit Hendrix for instead threading the needle, and producing a novel that is both loving paean to the paperbacks of yesteryear and a legitimate horror novel with a solid emotional core.

My Best Friend's Exorcism tells the story of Abby Rivers and Gretchen Lang, teenagers and best friends in late 1980s Charleston, SC. Both attend a prestigious private school, but whereas Gretchen comes from a wealthy family with a sought-after address, Abby is a latchkey kid on scholarship. In their review, the AV Club offers this succinct synopsis of the plot:

Abby Rivers and Gretchen Lang are entering their sophomore year of high school, part of a four-girl clique both popular and academically successful. Abby and Gretchen have been besties since grade school, possessing the kind of near-telepathic communication and her-before-me selflessness that characterizes the most intimate friendships. So naturally, Abby is the first to notice when Gretchen returns—after disappearing for the night during a sleepover—a little… different. Soon, she barely recognizes her oldest friend, as Gretchen begins executing progressively more malicious schemes that rain down disaster upon everyone in her orbit. Surely, Abby reasons, this can’t be the work of her friend. Someone or some thing has taken hold, and is twisting her, forming her into someone fearsome and new. After a school assembly visit from a bodybuilding troop of Christian brothers, Abby suspects her worst fear might be true: The devil has taken her best friend.

This is not a YA novel, though it has a certain YA sensibility. At its core, My Best Friend's Exorcism is a novel about friendship, and more specifically, about the kinds of friendship you only make when you're young, still forming as a person and so struggling to make sense of the world and your place in it. It feels emotionally authentic, which is not something I take for granted with genre fiction. Honestly it's pretty rare for me to feel to wholly invested in a genre novel's characters when you discount the plot and setting. But I'd honestly read this novel about Abby and Gretchen and their lives even if it didn't have anything to do with demonic possession.

Of course it is also a novel about demonic possession, and it's here that Hendrix really threads that needle between serious horror and campy retro fun. The story of Gretchen's possession is unnerving, unsettling and at times pretty shocking - but it's also peppered with elements of humor, especially when the '80s-tastic exorcist comes into play. The result isn't exactly funny and isn't exactly scary, but by blending the two, he does capture the feel and thrill of those old paperbacks.

It's worth noting that this isn't a gory book - it certainly has its moments but, in the aggregate, it's pretty low on the gush and splatter. Instead it burns slow, amping up the creep factor and occasionally venturing into the macabre. A lot is left to the imagination, which as often is the case, ends up in a darker place than the book itself.

Next comes the question of who the book is for, and I imagine some people will bounce of the retro '80s concept. That, in turn, begs the question: could someone less invested in '80s nostalgia enjoy the book as much as I did? I think so. You will get more mileage out of the book if you've also sung the wrong words to "Against All Odds," but the story and emotional core are strong enough that your enjoyment doesn't hinge on it. And this is what sets My Best Friend's Exorcism apart from many other entries into the '70s and '80s nostalgia cottage industry - the nostalgia is pretty well backgrounded.

There are also lots of little details I appreciated as well, many of which suggest things but don't outright say them. For example, we know Abby's family is struggling financially but she attends an elite school on scholarship - we get hints throughout the novel that her family has fallen on hard times, and *might* have once been prominent in the community, but it's never stated outright. It may not be true at all. I always like this kind of approach, the kind that leaves questions to be answered by your imagination.

Bottom line, this is a fun book that delivers mood, thrill and more than its share of heart. It's also hard to put down, and leaves enough questions unanswered that I'm already contemplating a re-read. One complaint: it's too short. I would happily have spent another one or two hundred pages with Abby and Gretchen.

Bonuses: +1 for this is how you do nostalgic art; +1 for copious references to Phil Collins

Penalties: -1 for it's too short

Nerd Coefficient. 8/10. Well worth your time and attention.

***POSTED BY: The G--purveyor of nerdliness, genre fanatic and Nerds of a
Feather founder/administrator, since 2012.