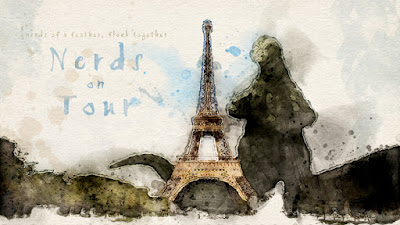 Friends, I had this year's Nerds of a Feather, Flock Together project all planned out. Using the considerable wealth we have amassed from running a nerd culture fanzine, I was going to hire a slightly terrifying but capable inventor-genius, ply them with baked goods and book reviews until they came up with an energy efficient global teleportation system, round up the nerd flock from our respective homes and spend three months touring the world, hitting up all the nerdiest, weirdest and most awe inspiring parts of the world, visiting all our fandom buddies, and most importantly eating a lot of very good food. Sure, there would be problems with this plan: I might have to hire a second inventor-genius to build robotic facsimiles that could fool our respective families, pets and day jobs, and the jetlag involved in instantaneous teleportation might be hard to deal with. But overall, I thought we had a plan to make 2020 the best year yet for our flock and for our content. What could possibly go wrong?

Well, unfortunately, none of us are living in the reality we expected right now. 2020 has laughed in the face of our ridiculous plans, and it has also laughed in the face of many of our real ones, both big and small. For those of us who had planned to travel - including the members of our flock who cancelled trips to New Zealand to hang out at Worldcon - the possibility of any physical trip has become as near-impossible as my group teleportation scheme. And for many of us, living through months of global crisis without an end in sight has changed our relationship to media and to what we're able to critically engage with and how. Perhaps the stories that sustain us have changed, or perhaps we're not able to read or watch as much as we used to.

In true speculative fiction style, though, we're going to be imagining our way out, armed with our Netflix subscriptions and bookshelves and a sense of armchair adventure. Welcome to Nerds on Tour!

From the comfort of our own homes, we're going to be striking out into the world of international genre fiction: for our team of Europeans and North Americans, this means anything not from our own countries (the UK and the USA are right out), and we're going to be doing our best to seek out work from countries and regions that are underrepresented in English speaking science fiction and fantasy markets. We'll be checking out some classics (both old and new), diving into gems from smaller presses, and seeking to broaden our own horizons with the wealth of . For the first time, we're also offering a bingo challenge for this year's project, with 20 prompts for you to read or watch along to! Anything goes, from TV to books to short fiction to musical concept albums; the only catch is that each square has to be filled with media from a different country. The card is below, and if you do play along, be sure to keep us updated on Twitter using #NerdsOnTour so we can check out what you're up to!

Speculative fiction is, by definition, a global phenomenon, but the Anglophone science fiction and fantasy community has often sought to define its boundaries in ways that exclude much of the work being created in the rest of the world, even as it adds the "World" label into its own events and awards. At a time when it can feel like our own worlds are narrowing, we think its more important than ever to push back, to remind ourselves why we love genre in all its forms and to go beyond the narrow window of culture, language and geography that shapes most of the media we get to watch. Nerds on Tour will be running on Mondays from now until December, and we hope you enjoy everything we have in store.

- Adri and the Nerds of a Feather Team 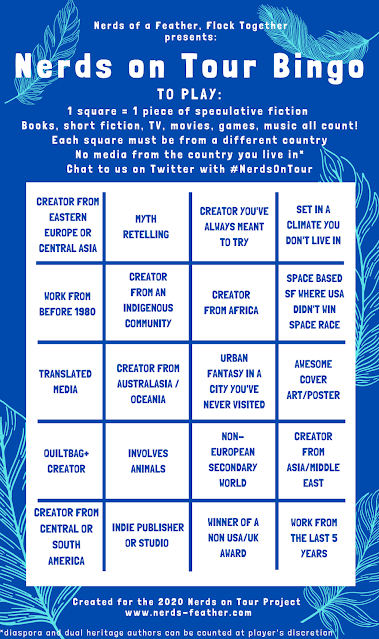