If all goes well, come this January a brand new and very unique speculative fiction magazine will be grabbing your attention. Constelación Magazine will be a quarterly magazine that will publish each story in both Spanish and English. Authors are encouraged to submit in either Spanish or English, and the magazine editors will take care of the translation service. The editors expect fifty percent of the fiction they publish to be from authors from the Caribbean, Latin America, and their diaspora.  You can learn more about Constelación Magazine at their website, and at their Kickstarter page. They even have a 0.5 Sample issue you can read!

Constelación Magazine is crowdfunding through Kickstarter, and as of the drafting of this post, they are past the 50% funding marker.  As soon as I heard about Constelación Magazine, I reached out to the co-editors Coral Alejandra Moore and Eliana González Ugarte to see if I could interview them about their new project. They kindly looked past all my over-excited exclamation marks and smiley faces in my messages.

Coral Alejandra Moore's fiction has been published by Diabolical Plots, Zombies Needs  Brains, and Secrets of the Goat People.  She is the author interviewer at Lightspeed Magazine, a submissions reader at Uncanny Magazine, and she is the Social Media Manager for The Dream Foundry. Eliana González Ugarte resides in Paraguay, where she has won more than 10 short story awards. In 2017 she co-wrote the screenplay for Alas de Gloria, an animated film about the Chaco War that is currently in production. Under her pen name, Morgan Díaz, she writes Litrpg novels in the Vindication 2.0 series.

Why am I so excited for this magazine? Oh, so many reasons! The authors won't be responsible for finding a translator, they can submit in Spanish or English, whichever language they are most comfortable with. And for me, personally, there is something special about seeing a story in another language.  The shapes of the sounds are different, the details of the patterns are different. Sure, sure, Samovar Magazine does this, and they do it beautifully. But having more magazines that do this? That's even better.

NOAF: I am so excited for Constelación Magazine! When and how, and why did you decide to make this magazine a reality?

Coral Alejandra Moore: The entire process of building Constelación from the idea to what you can see on the website and social media now was really organic. Eliana and I met at a virtual convention called Flights of Foundry in May of this year, and a few weeks later we met again at the Nebulas convention. We both happened to be a in a zoom room where John Picacio and Mary Robinette Kowal started talking about Spanish language speculative fiction because of Eliana's experience with it, and that got the hamsters in my brain turning. A few emails, and Twitter DMs later, Eliana and I were already moving forward at warp speed, and we really haven't stopped since then. Lots of people got quarantine puppies during the pandemic, but we got a quarantine magazine! NOAF: What makes Constelación Magazine different from other speculative fiction magazines out there?

Eliana González Ugarte: We take stories in both English and Spanish! One of our goals is to publish more Latin American and Caribbean authors who may not be able to submit their stories directly in English, or they’d have to first pay someone to translate it for them in order to be able to submit.

NOAF: The first year of the magazine will be funded through Kickstarter. Crowdfunding always looks so easy, but in reality it can be gut wrenching. Why did you decide to go the crowd funding route? CAM: Of everything we talked about, that was actually the point that it took us the most time to decide. And even after we decided we were going to do a Kickstarter, we went back and forth several times about the amount we'd try to raise. In the end, we decided to do a Kickstarter and start at a higher goal because the other options left us making a product that would have been nice, but wouldn't have been exactly what we wanted. We decided to reach for the stars. It is a little nerve-racking, but it's fun too. We've gotten to talk to a lot of people we might not have otherwise met while doing this fundraiser. We've been able to work with artisans to get some of our rewards which we're both really excited about. NOAF: For Kickstarter backers, what are some of the backer rewards? And what's with the Capybara? CAM: We have so many great rewards and you can see them all here https://www.kickstarter.com/projects/coralmoore/constelacion-magazine! Hand-carved silver filigree ball-point pens made in Paraguay, fountain pens made of woods native to Puerto Rico, and speculative fiction, both digital and print, in three different languages, just to name a few.

The capybaras? Why, have you seen some? :) Okay, well, we thought we needed something cute to make into swag for our Kickstarter because who doesn't love cute swag, right? And Eliana had made some watercolor nebula capybaras a few years ago for something else, and the idea that became Tobias, our 2021 mascot, evolved out of that. Now we have watercolor constellation capybaras in a rainbow of colors and we may never be able to feed them all, but at least they are good for snuggling! 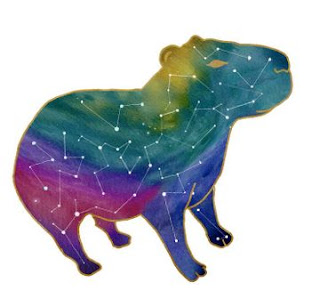 NOAF: Your first issue is scheduled to go out in January, and the Kickstarter ends on November 1st. That doesn't give you a lot of time to get everything together for that first issue. What all is already completed for the first issue? What yet needs to be accomplished? CAM: No, it really doesn't give us a lot of time, but we've got a really good team of people put together for the first issue, and we think we can get it all done. We have a cover from John Picacio on the way that we should unveil in the next couple of weeks. We plan to have an original story by Malka Older and a reprint from Silvia Moreno-Garcia. Once we pick out our stories from the submissions pile, we need to translate everything, then do the ebook formatting, then put them up on the website, and that's pretty much it. No problem! *faints* NOAF: Are your story submissions open? If someone wants to submit a story to Constelación Magazine, what's the process? CAM: We're opening to the public for submissions for our first issue on October 15th (which it is today as I'm writing this but is most definitely in the past now as you are reading this--time travel is funny!) for two weeks. We'll open again on December 15th for our second issue. All of the details about our issue themes are on our submissions page: https://www.constelacionmagazine.com/submissions There's also a link there to our Moksha page, where writers should submit their stories. NOAF: Are you hiring translators? If someone wants to do translation work for you, how should they get in touch with you? EGU: What we’re doing is pairing translators with stories. A lot of great translators have reached out to us by email or social media, and we’ve invited them all to our Discord so they can stay on top of our process. When we decide on the stories we’ll be publishing, we’ll contact the ones we feel will be a good match for that particular work, based on their previous experience and/or interests. Anyone interested in helping can email us at hola@constelacionmagazine.com. NOAF: You're about to launch a SFWA qualifying Spanish / English entirely bilingual speculative fiction magazine. How's it feel? (are you excited? Nervous? Terrified? bouncing off the walls?) EGU: It’s a little of all three and bounces back and forth. Constelación is our baby, and just like new parents, we’re still learning how to nurture it so it becomes the vision we’re aspiring for. For the both of us, working on such an amazing project during such a hard year has been a lifeline. When you pour your heart out working towards something you love, life becomes immeasurably easier to deal with!

NOAF: Thank you so much! If you can't tell, I'm really excited for Constelación Magazine!