Plots, plans, secrets and lies brings the story of Nahri, Ali, Dara and the entire city of Daevabad  to a conclusion. 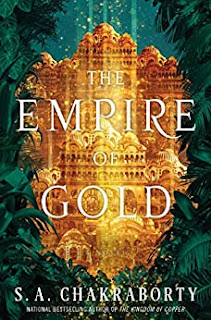 By the end of Kingdom of Copper, second in the Daevabad Trilogy, the protagonists of the series are definitely in a “end of the Empire Strikes Back” sort of position. Nahri, the center of our story, the half-human (Shafit) healer, has been transported out of the city along with Ali, son of the now fallen Ghassan. Now that she is back in Cairo, thousands of miles away from Daevabad--now what? Meanwhile, Banu Manizheh now rules Daevabad, her lightning strike against the city absolutely successful. Even worse, Dara, who had incited the entire trilogy by coming at Nahri’s call and bringing her to Daevabad, is under Manizheh’s orders. Even as he disagrees with Manizheh’s tightening fist over the city, he finds himself less and less able to resist her commands and her excesses.

Thus the story of S.A. Chakraborty’s Empire of Gold brings these stories to a climax, with the future of not only characters, or a city, but entire peoples hang in the balance.

Years have passed since the start of the first book in the series (City of Brass) and the passage of time, and how it has affected the characters, as long lived as some of them might be, is a theme that weighs upon the novel. Time, and the past, and history are both illuminating, and also shackles and restrictions on them, past being prologue, and trying to transcend their pasts, to live up to their potentials, or, sometimes, not to live down the darkness of their pasts. This theme runs through all of the three major characters. Nahri’s story is of finding the true nature of her heritage and integrating that with what she wants to do with her life--to escape Daevabad, or to return and save it? Ali’s own heritage and past, and a hard set of choices as to who he really is, and what that can make him be now, is explored. And then there is Dara, once a weapon, trying to find freedom, and then caught again in the role of the past. The author works these themes hard on the characters and it is the playing of these threads that drive the decisions of the plot.

Once again, though, the author prefers to have the really powerful characters not to be our viewpoints, being forces that the characters must deal with, bargain with, or overcome. The book provides us with a wealth of this, from Manizheh, now empowered and in control of Daevabad, to new characters like Sobek and Tiamat. The theme of pasts and living up to the deeds of the past and finding a way to the future , or living it down. This is a quasi historical fantasy novel that is heavy on character history as motivation and legacy. And we do get some revelations, and reactions to those revelations about that history, throughout the narrative. For the most part, it helps fill in the gaps of motivations and desires of the characters.

But the strongest thing in the book and the series as a whole is the immersive, lush, and evocative language that the author brings to the fray. From the destruction of neighborhoods in Daevabad as Manizheh holds onto power, to Nahri’s joyful return to Cairo, to Ali’s dread bargain and meeting with a primal power, the description brings the reader into the action, into the characters, into the story in a deep and abiding way. The author uses sense, and description, evocation of emotion to really give us a feel of what the characters are feeling and the environments they are in. I never have a problem with “heads in white rooms” in the author’s writing, be it strong and pointed conversations, or action set pieces. I fell in love with Daevabad again, even as it suffers terribly. Ta Ntry, which gets visited in the book, is a wondrous place brought to vivid life. And so much more.

The main issue I have with the series conclusion is one that I see in some series that unfortunately this book falls prey to and it involves the page creep and a misalignment in the series structure as a whole. If a book spends its forematter in posing questions and a scenario and laying the pieces for its answer in the back portion, so does a series. This last volume, instead of “answering questions” spends a lot of effort on lovely worldbuilding and recomplication and new plot elements that in some ways feel a book too late and in some cases fizzle out and feel like a false flag. Subverting reader expectations on plot elements that take up a good chunk of the final volume and wind up being not significant in the end feels like a cheat to the reader and to the series. A lot of what the author brings here is fascinating and I lapped it up on a worldbuilding level, but on a plotting level, it works far less well.

Empire of Gold is definitely worthwhile to read as a series finale, but it didn’t quite reach for the titular gold of a series finale that brings the entire series together in a near perfect say. It is just a solid work of silver, instead.

Bonuses: +1 for excellent use of language and description to provide an immersive experience