Adri Joins the Subjective Chaos Kind of Awards: Round 1 Results

Readers may remember that way back in February, I signed on with a group of fabulous fellow bloggers and SFF nerds on a speculative awards project: the Subjective Chaos Kind of Awards. Each member of the jury picked our favourite reads across six categories: fantasy, science fiction, blurred boundaries, series, novella and short story. Since then, we've been working hard behind the scenes to read up on each others' picks, argue about each others' tastes and occasionally lament the many and varied challenges of keeping up a consistent reading schedule during a pandemic. Eventually, we got to the point where we could give our votes for the first round - whittling each category of 7+ nominees into a shortlist of two (well, sometimes three) top picks.

Read on for our finalists in each of the categories, and my thoughts on what made me happy in each one: 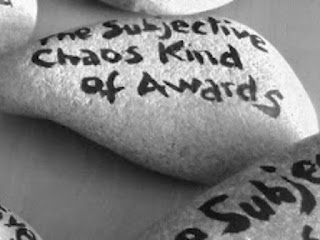 Finalists: All City by Alex Di Francesco vs. A Memory Called Empire by Arkady Martine

Thoughts: A Memory Called Empire was one of my favourites going in to this category, and despite some strong competition from other works, it remains my favourite of our space opera picks, standing out among a fun set of titles that all had something interesting to bring to the table. All City was a bit of an outlier among our finalist group, as a near-future narrative focused on the social fallout from a climate disaster in New York. It's an impressive book, although its bleak outlook makes it a tough read at the best of times.

Most of the books here were new to me, and of the non-finalists I want to particularly highlight The Outside by Ada Hoffman, with its fascinating own voices portrayal of an autistic protagonist trying to deal with intrusions of mind-bending cosmic horror in a galaxy ruled by artificial Gods. While Lovecraftian horror isn't generally my thing, I really admired the elements that Hoffman brings together here, and its a great addition to the Space Opera canon.

Finalists: Kingdom of Souls by Rena Barron vs. The Ten Thousand Doors of January by Alix E. Harrow vs. Realm of Ash by Tasha Suri

Thoughts: This was by far the trickiest category to make a decision in, and I don't think it's an accident that it's one of the categories in which we had a tie for second place, putting three works into the finals instead of two. Both Realm of Ash and Kingdom of Souls are works that I have reviewed favourably in the past, and The Ten Thousand Doors of January (Paul's review) was another favourite of 2019 and very much deserves its place on this list. Really, though, there wasn't anything from our shortlist that I didn't feel would have deserved a position in the second round.

The new-to-me works from our shortlist were The Bone Ships by R.J. Barker and The Gilded Wolves by Roshani Chokshi, series starters which have both firmly captured my attention for future instalments.

Finalists: The Migration by Helen Marshall vs David Mogo, Godhunter by Suyi Davies Okungbowa vs Gideon the Ninth by Tamsyn Muir

Thoughts: This category ended up covering a lot of ground, from fantasy-adjacent near future SF to urban fantasy horror to superhero romance, but Gideon the Ninth had my heart going in and it still has my heart as we enter the second round. Muir's irreverant gothic space fantasy might not be everyone's cup of tea, but it sure as hell is mine. Here, its joined by The Migration - a tricky book to recommend right now for pandemic storyline reasons, but an interesting one nonetheless - and Suyi Davies Okungbowa's action-packed, unusually structured urban fantasy David Mogo, Godhunter. Do I still have my favourite? Yeah. But knowing my co-judges, the group decision on this one is still wide open.

Of the rest of the works, the big find here for me was The Infinite Noise by Lauren Shippen, based on The Bright Sessions podcast. I hadn't listened to the Bright Sessions (and I've still only finished Season 1), but I found Caleb and Adam's story to be just the kind of sweetness I needed at a certain stage of lockdown.

Thoughts: The series category was one of the hardest for me, both because of the range of entries, and because, you know, there's a lot of books in a series and we had 8 of them to get through. In the end, I made it through at least 1.5 volumes in each of the series under consideration, with a promise to return to most of these worlds and characters at some point. It's also just an odd thing to judge the quality of a series as more than the sum of its parts, sometimes. For example, what to make of Adrian Tchaikovsky's Children of Time - Children of Ruin duology, with a first volume that feels utterly right as a Clarke Award winner, and a follow-up that's perfectly fine, but doesn't really match the boundary-pushing quality of its predecessor? Compare that to something like the Luna trilogy, which feels like it could almost be a single volume of epic political machinations in the way it manages its tension across volumes.

In the end, we've ended up with two quite different works in the finals: the strange, slow fantasy of the Elemental Logic trilogy against the tightly plotted science fiction thriller of Rosewater. From the rest of the ballot, I especially enjoyed discovering Swords and Fire, Melissa Caruso's cosy-with-an-edge tale of magical intrigue.

Finalists: This Is How You Lose The Time War by Amal El-Mohtar and Max Gladstone vs. The Deep by Rivers Solomon

Thoughts: On the one hand, this was a wonderful category to read, with almost nothing that I didn't enjoy: even the most left-field entry here, the magical realist exploration of the Isle of Wight under Brexit that is Isabel Waidner's We Are Made of Diamond Stuff, was a total delight, albeit in an "I'm not sure what happened" sort of way. Special mention, also, to Wole Talabi's "Incompleteness Theories", and to Emily Tesh's Silver in the Wood, both excellent works of science fiction and fantasy romance respectively.  But there was only ever going to be one shortlist duo I wanted from this category, and I'm pleased to say that Team SCKA came through on this. Time War (Paul's review, Adri's review) vs. The Deep (Joe's review): let's go.

Finalists: "The Migration Suite: A Study in C Sharp Minor" by Maurice Broaddus vs "The Ocean That Fades Into Sky" by Kathleen Kayembe

Thoughts: I was all set to talk about the final two, but then I discovered that both of the magazine issues these come from have beautiful, complementary Julie Dillon art covers (side note: I have a print of the turtle lady and am looking forward to framing her on a wall very soon), and now I really just want to read the story about those two flying people from very different cultures coming together in a whirlwind romance that changes their societies forever. I mean, look at them. It could literally be a romance in a whirlwind. Giving you that one for free, fiction-writing readers.

But, no, these actual stories that I am actually here to talk about are great finalists, from an overall strong set of short fiction entries that ran the gamut from effective comedy pieces through to evocative flash-length vignettes through to longer pieces like our two finalists. The result is a pairing that's going to be one of the toughest choices in our second round for sure.