Congratulations to Grace P. Fong for her Hugo nomination for best fan artist!

Fong's artwork has  been featured in Strange Horizons, The Future Fire, Uncanny, and elsewhere. Her artwork showcases a flair for the dramatic, with characters often frozen in moments that get the viewer to immediately start a story in their heads, about what just happened, or about what might happen in the next few minutes.

She's done fan art in her favorite worlds, including The Grishaverse, the Illuminae Files, The Young Elites, Game of Thrones, The Hunger Games, and many more.  Fong is the kind of artist that when she sees stories and characters she likes, she puts her own artistic spin on them, showing the character's personality in a whole different light, to the joy of fans.

Along with Rhiannon Rasmussen-Smith,  Fong is working on Bone Ink, a death positive short comic book, which will appear in Iron Circus's "You Died" anthology.  She been involved with video games and movies, such as The Croods, Kung Fu Panda 2, and Call of Duty: Infinite Warfare. You can learn more about Fong at her website GracePFong.com, or by following her on twitter at @fictograph.

Fong was kind enough to answer all sorts of questions I sent her way, everything from the dynamism and drama in her artwork, to how she goes about creating each piece (usually lots of drafting! and sometimes, none!), to Bone Ink, and more. 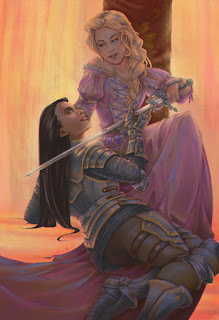 NOAF: What media do you typically work in? How did you first get started working with these materials?

G.P.F.: For black and white, I'm a big fan of pencils and inks. I like pencils because you can get a wide range of shades, and I like pens because you have to be really powerful with your strokes because you can't erase. For color - I prefer digital. I usually use Adobe Photoshop and Procreate for iPad. They're very difficult to start off with because there's so many tools and possibilities, but I like how you can do so much without paying a lot of money or using potentially toxic materials.

G.P.F.: Haha, that's actually really hard. I guess I'd describe it as just - melodramatic? I like using groups of characters, lots of detail, and very contrasting lights and darks. Lately, I've been experimenting with flat versus deep space on the picture plane - how to use both lines and painting together in a unique way.

G.P.F.: It's all because I'm a big fantasy fan myself! I started drawing as a child by copying my favorite cartoons on TV - Sonic the Hedgehog and Sailor Moon, specifically. But then I discovered Animorphs and Tamora Pierce and began to draw those characters, too! After some time in art school, I picked up reading again and began drawing stuff for newer books. It felt like coming home. 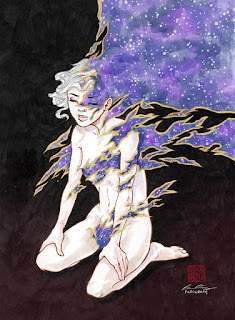 G.P.F.: Following the award's eligibility criteria for Fan Art, the pieces I've included are ones I've done for speculative fiction magazines in the past year. I hope for all of them that I've managed to make something that speaks to my clients' stories. However, something struck me when doing "Pleiades for A New Generation" - the accompanying story was very abstract, but audiences resonated with the image of being exposed and falling apart as a way of revealing our inner stardust, being something else grander on the inside. It was actually a much quicker piece than the rest and using less complicated materials that I'd normally use just for sketching. The special ones just kind of come out fully formed, no drafts necessary.

NOAF: I noticed a lot of your artwork involves two people who are interacting with each other, and I love this, because my mind immediately starts making up a story about them and wondering who they are and what they are all about. Do you know their story before you start drawing them? What influences your composition decisions, regarding their positions to one another?

G.P.F.: I always have the concept first. Sometimes it's a vague idea and sometimes it's very clear and specific. But as an artist, we have processes for drafting like thumbnails, color compositions, sketching, that help me arrive at a composition that reflects the narrative. I always tell myself that my multi-character pieces are "visualizing the space between two individuals" - like whether that space is close, far apart, tense, caring. And then I try to use lines, colors, and shapes that express that feeling. 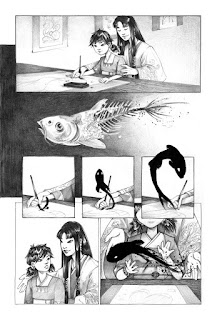 NOAF: You mentioned on your website you have a forthcoming comic "Bone Ink", created with Rhiannon Rasmussen-Smith. What can you tell us about "Bone Ink"?

G.P.F.: "Bone Ink" will be a short, six-page, comic included in Iron Circus's YOU DIED anthology. It's about being death positive. Rhiannon and I have created a story about a girl who wants to turn her mother's ashes into a tattoo. I sketched the pages digitally but finished them in traditional media because I wanted to echo the themes of how creative work transforms as it passes through generations. For more information on death positivity, I recommend playing the video game A Mortician's Tale.

G.P.F.: It's pretty different. Because I don't do art for games. I work full time as a programmer, haha.