Watching the Hugos continues with a look at the six finalists up for Dramatic Presentation, Long Form. Long Form generally means feature length movies but by definition is any eligible work 90 minutes or longer.

In previous years, three seasons of television have made the final ballot (Heroes, Game of Thrones, Stranger Things) and one audio book (METAtropolis, which was created for audio first). Otherwise, movies. Just movies.

That's one reason why this year's Long Form category is so delightful - there are two seasons of television on it, though neither actually aired on broadcast television.


Let's take a look at the finalists, shall we?

Us, written and directed by Jordan Peele (Monkeypaw Productions/Universal Pictures) 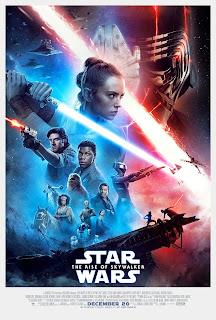 Star Wars: The Rise of Skywalker: I wrote almost two thousand words about The Rise of Skywalker back in December and January for an essay that nobody has seen because I'm not sure I was ever close to finishing it. There were so many more things I wanted to touch upon but my will to continue was gone. One thing I found interesting re-reading the essay is that I never really talked about my overall impression of the movie. I focused on the details, but not the whole.

The thing is, I still don't quite know what to think about The Rise of Skywalker. On the one hand, it certainly did close out the main line saga and closed the door on a number of lingering storylines that fans have been looking forward to. On the other hand, it wasn't as satisfying as it should have been or as it could have been. Maybe it never could be, that fans who have been watching for decades had built up far too much expectation and that online bros would never be satisfied - but even with that impossible expectation and switching of focus, Rise of Skywalker was a mix of a mess and moments of absolute grace.

Rey calling Leia "Master" was divine, but Rey being the granddaughter of Palpatine was possibly the worst storytelling decision they could have made. The Rise of Skywalker is a movie that is less than the sum of its parts. I could detail all of the wonderful parts and lament the details of those that didn't live up to the promise, but then I'd be two thousand words into an essay I'm not going to finish. 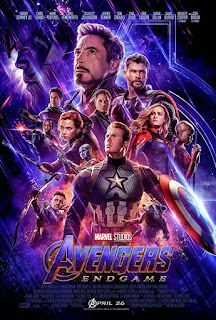 Avengers: Endgame: Endgame gets a bit of a bad wrap for being an overbloated mess of a film that goes on for approximately 85 hours and got at least one significant moment terribly wrong, but it's such an impossibly satisfying ending to a 23 film saga. Endgame has so many beats to hit, but it benefits from a strong and dedicated plan - unlike, say, Star Wars.

Perhaps even less so than The Rise of Skywalker, Endgame does not stand on its own. Every moment is earned by the twenty two previous movies. Yes, the heart of Rise of Skywalker depends on at the bare minimum The Force Awakens and The Last Jedi, but also on the stories of Luke Skywalker, Han Solo, and Leia Organa - but as much as Star Wars is the story of "The Skywalker Saga" those movies are clearly a disjointed and unplanned mess. Endgame is not, despite my using the word "mess" in the first sentence.

Endgame is the culmination of an ambitious plan - though I would be skeptical of any claim that all of this was mapped out from the start. But even from that start, little puzzle pieces were laid down to get to Endgame. It's a movie that can't be taken as a singular piece of film making, but as that, well, endgame, is is masterful.

It could use more Carol Danvers, though. 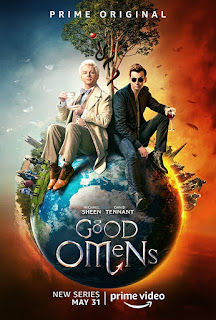 Good Omens: There are a great many readers who absolutely adore Good Omens, the now thirty year old novel written by Terry Pratchett and Neil Gaiman. I was not one of them, and I can't say that I had any sense of anticipation for the Amazon adaptation. But, when a pandemic has one working from home for as long as I have been working from home, you find yourself watching stuff that you might not otherwise watch. I would say that in my case that includes a bunch of shlocky 80's movies, but I'd watch those anyway.

Regardless, Good Omens didn't quite work from me for the start but I was interested enough in the relationship between Michael Sheen (angel) and David Tennant (demon) that I would give it another episode. One episode turned into six and I was generally interested in the story - and despite having once read the novel, I didn't remember anything about the story. It's a comic story of heaven and hell fighting sort of fighting each other for the anti-christ, a twelve year old boy. It's really the story of a friendship between an angel and a demon who are both willing to risk everything, even their own sides, to prevent a prophesied apocalypse.

I can't say I cared at all about the story, but I cared deeply about the characters (and it was nice to see David Tennant again) - the two angels, as well as another character named Anathema. The character work is just lovely. 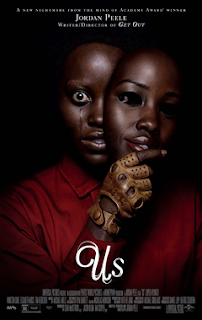 Us: I'm not in the game of saying that a particular actor was robbed of an Academy Award nomination (besides perhaps Tom Hanks in Captain Philips), but I can only hope that Lupita Nyong'o was seriously considered for Best Actress for Us because she is spectacular in this movie and like many actors in Us she is pulling double duty in playing both Adelaide as well as her "tethered" doppelganger Red. The success of Us hinges on Nyong'o's performance and that's an investment well earned.

It is occasionally difficult not to compare Us to (director and screenwriter) Jordan Peele's previous film Get Out but despite being horror they are very different movies. Us is much more of a traditional straight up horror flick and frankly, it's terrifying. The tethered are creepy as hell, whether it is the doppelgangers of Adelaide's family or Elizabeth Moss's doppelganger (Moss was also fantastic in a supporting role) - and not that I want a sequel to Us, but there's still a whole completely different survival movie of story left to tell. Because that's the thing, Jordan Peele leaves us wanting more. 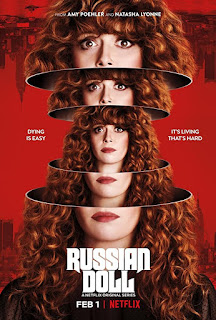 Russian Doll: Russian Doll is a puzzle box of a show, with time loop followed by time loop. Whatever expectations views have after the first or second episode, and I'm not sure that there are any expectations beyond "what the hell did I just watch?", are completely upended as the series progresses.

I'm honestly not sure what the series is actually about - it's maybe about healing, but maybe it's about relationships or acceptance or maybe it's just a twisty time story, though Russian Doll isn't "just" anything. It's a masterwork from Natasha Lyonne. Frequently unpleasant, Russian Doll is always compelling. 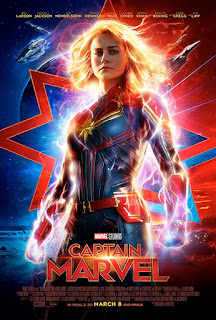 Captain Marvel: Higher. Further. Faster. In a year I wished for more Carol Danvers in Avengers: Endgame, the world (aka Disney / Marvel) gives me all the Carol Danvers in Captain Marvel. While I would have preferred to have a full grown Captain Marvel at the start of the movie, there is so much joy in watching her powers develop and all of those small almost meme worthy moments are absolute perfection. Whether it is Carol looking over at Maria with "higher, further, faster baby" or the sequence of Carol getting up over and over again or the depth of the entire Maria / Carol relationship, let alone the pretty kick ass action - Captain Marvel is a delight.

In her review, Adri notes that "Captain Marvel is a great film, and as every woman led film outside of "chick flick" genres needs to be a great film in order to justify its own existence, that's something that we can all breathe a sigh of relief about as well as celebrating. Its smart message about self-belief, regardless of the limitations people feel entitled to stick on you, is one that works particularly well for a female superhero, and is overt about sexism without it overtaking the narrative or overshadowing her unique journey or the fact that she's probably the strongest and best thing I've seen happen to this franchise. I came out of Captain Marvel immensely pleased that I'd made the time for it"

There are not many movies that I come out of excited to have seen it but also that I can't wait for my children to be old enough to watch themselves. Captain Marvel is one such movie.