Driftwood harnesses the power of the fix-up to tell the story of the people and characters living at the abattoir of all realities. 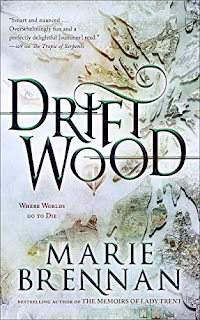 What happens after the world has an apocalypse and no help is forthcoming? What happens to dying worlds and the people living in them? In the verse of Marie Brennan’s Driftwood, dying worlds find themselves on the edges of a collection of broken realities and worlds and as new worlds join the fray, are slowly pushed from the margins toward the center. As they are pushed in, the world becomes squeezed, smaller and smaller, until what was once the size of a world is cut down to a country, to a province, to a city, a neighborhood, and then to even less. Once the world is pushed to the very center of Driftwood, and there, the bitter remnants of the world are extinguished. It's a continuous process, and even those who escape their world into the shards of another eventually have their cultures and societies extinguished and eventually themselves. It’s implacable and inevitable, and yet one mysterious character defies this rule.

Marie Brennan’s Driftwood is a collection of previous short stories using a recurring character, Last, and his relationship and connections to numerous characters and worlds within Driftwood. Lost is different than all others. His world must have gone to The Crush  long ago, and yet he is still alive. Or he was. The fix-up portions of the novel, the glue that binds the disparate stories together, is a meeting of a group of individuals who have heard of, or had their lives touched by Lost. But Lost himself seems to have disappeared, is gone. Has he been finally claimed by Driftwood?

The interstitial elements are, though, just a clothesline (and, honestly a rather thin one in my view, a weakness of the work) to get at the meat of the stories. The stories feature Lost as a character but he himself is really just a facilitator and opener that gives other characters a chance to have their Driftwood stories and adventures. In this way the interstitial elements are exactly the same at a more meta level--it exists just to allow the stories to be a little more than just a collection of short stories.

The stories themselves span a wide variety of tale types within the matrix of Driftwood. “A Heretic by Degrees” features a protagonist from a world relatively new to Driftwood, new enough that the King has declared that the world outside of his own does not exist...except that the King is dying and the cure might indeed exist in one of the worlds outside of his own.”Into the Wind” is a story of someone from a more fragmented world trying to rescue and save a piece of it from the apocalypse that ravages it still. “The Ascent of Unreason”  features someone who wants to make a map of Driftwood, a seemingly impossible task given its ever shifting and changing nature...but he has a cunning plan, and Last can help. “Remembering Light” is one of the darkest stories, making Last himself face his own doubts about being the last survivor of his civilization, and carrying the burden of that memory. It feels like the most personal of the stories, in terms of Last himself. “The God of Driftwood” shows the meanings people can attach to the randomness and utter nihilism of a place that destroys worlds, and the lies that we tell ourselves and each other. And “Smiling at the End of the World” is a short and intimate tale without Last at all, about the last two souls of their world, facing the Crush.

Beyond the individual stories, the core idea that Brennan works here is not knew--the interdimensional city where the laws of physics and magic vary even across a street goes back to Grimjack’s Cynosure, if not all the way back to Sidewise in Time, but Brennan makes it her own here by framing Driftwood as the end point of worlds and peoples and cultures. Whatever apocalypse happens to each world, and they are individual, the consequences of that apocalypse, at least as by the rules of her multiverse, is to bring that world into the sphere of Driftwood and slowly and inexorably be pushed and squeezed in and be destroyed. It reminds me of the city of Dis in the Planarch Codex supplement for the RPG Dungeon World, except Dis ion that world actively is eating other worlds and aggregating pieces to itself rather than other apocalypses bringing those pieces toward the singularity of the Crush.  It does occur to me, consequently, that Driftwood would be an interesting setting to set an RPG scenario within.

Brennan does soft pedal the various apocalypses that plague the worlds that are drawn to Driftwood and we’re left to wonder and speculate on our own (since the characters themselves don’t know) what brings a world into Driftwood in the first place, to inexorably be pushed to the Crush and be destroyed.And what brings worlds there in the first place to that doom isn’t the point, and as we learn in the stories, the slow destruction isn’t the point, either. The point is what the people of these worlds do with the time that they have. In the time of the Coronavirus, that’s a lesson worth remembering.

Bonuses: +1 for a strong set of stories.
+1 for fascinating and inventive worldbuilding

Penalties: -1 the connective material is the weakest element here by far.