Microreview [book]: This is How You Lose the Time War, by Amal El-Mohtar and Max Gladstone

This is how you lose the Time War is a moving story of a professional rivalry a love story, and a meeting of perspectives told through world-changing time travelers’ letters 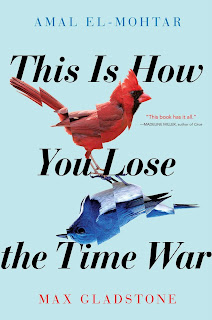 The idea was inevitable, and originated relatively early in the history of time travel narratives. If one person can invent a time machine, and if history can be changed, then more than one person is going to invent a time machine, and the goals of those forces are going to not be congruent. From Jack Williamson and Fritz Leiber to The Terminator, to recent novellas like Alasdair Reynolds’ Permafrost  and Kate Heartfield’s Alice Payne Arrives, there is a lot of mileage to the idea of a Changewar, where different time traveling factions seek to change history

Max Gladstone and Amal El-Mohtar’s This is How You Lose the Time War takes this subgenre of a subgenre in a new direction by telling the story of two agents from opposite sides, who find something in each other, greater than the causes they separately serve..That in itself would be an interesting enough concept to pin down a novella, but the authors have an additional, dellightful wrinkle: The agents do not meet, but rather communicate in letters to each other.

In a world of twitter, and direct messages, and texts, and instant social media, long form letters are a delightful retro technology and form. Epistolary novels and stories, never the most common of forms even when letters were dominant as a means of communication, are exceedingly distinctive just by their format in this day and age. It’s a bold choice by the authors to have the two agents, Red (from a technological end state utopia) and Blue (from a biological super consciousness utopia) to start their correspondence and to have their letters (which take increasingly unusual forms as described in the narrative) be the backbone of the action. Every chapter has one of the principals in action, and a letter from the other principals, giving a harmonic balance for the reader as far as perspective. But it is within the letters themselves that the novella truly sings and shows its power.

Those letters, those perspectives, the shift from adversarial relationship to something more, as the two best time agents in all of history find in each other something more in common than in their own sides, Agency and Garden, that this novels runs on. I was half expecting, going in, a narrative more like Leiber or Anderson, or the like, where jonbar points are displayed and fought over, and changed back and forth as the two sides change history. And there is some of that but it is in the most general of senses, with lots of references to alternate strands and timelines. The worlds that were and what might be,and could be are really just smoke and reflections, pale ghosts compared to how Red and Blue bare their souls and hearts to each other. So this is not a story for deep explorations of how saving Archduke Ferdinand or giving Genghis Khan a longer life might change the timelines. Sure, there are handwaves in the direction of changing things here and there, but those are not the point. The novella is not really oriented toward pulse pounding action, either, although there is a culminating sequence toward the end of the novella where the style does change a bit to allow for it.

What this novella provides, and the target readers, are an extremely literary focus. There are clever bits with wordplay, allusions, references, and even a book recommendation mixed in with that. The letters, starting as boasting and admonitions that each side is going to win, slowly change and evolve, as the adversarial relationship finally turns to respect, and then love. The power and the strength of the letters become richer and richer as the novella continues, as Red and Blue really start to really understand each other, and themselves, that the novella truly shines with the full power of the writers. The seamlessness of the two writers writing is also noteworthy--I can make a guess as to which writer might have written which side more predominantly but I cannot possibly be sure of that. Like Red and Blue themselves, the two sides blend into each other, and while I may slightly prefer the letters of Blue to Red, the beauty and poetry of both sides’ letters, especially in the latter portion, is magical.I was moved deeply by the slow burn love story that unfolds in the words in their letters.

My only real quibble is something that I have tried to make clear in this review, this novella being difficult to capture in words, like a letter being consumed in flame even as you write it. My quibble and it is not really for myself but for others is that it is an extremely narrow and specific kind of story that is going to appeal to a particularly stratum of readers, and probably be of absolute no interest to many more. Even if you are a big fan of time travel and Changewar stories, if you are expecting something like a cold or hot war of temporal changes and conflict (again, something I wondered if we would see in the novella, and we do not), you are going to come away disappointed. This is a character focused story, a love story between two women who are opposing agents in a time war. It's heartbreakingly, movingly good at what it does, but that thing is a narrow interest.

There is a line in one of the letters, “All good stories travel from the outside in”, and This is How You Lose the Time War fulfills that promise for me as a reader.
---

Penalties: -1 for a style and format that may not be appreciated by every reader.

Reference: El-Mohtar, Amal and Gladstone, Max, This is How You Lose the Time War [Saga Press, 2019]