Microreview: Year of the Witching by Alexis Henderson

In Year of the Witching, author Alexis Henderson renders a  dark fantastic secondary world tale with resonances to Puritan America and the witchcraft with a strong central character focus. 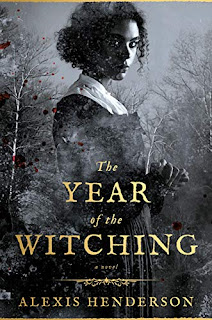 
Immanuelle’s very existence is a blasphemy, a disgrace. Her mother’s miscegenation that resulted in her birth was a scandal in the community of Bethel, and the Moore family are outsiders in the community. Even with assiduous efforts at open piety, Immaunelle is an outsider within an outsider family, only good for her sheep rearing. When an incident brings here within the rightly forbidden Darkwood, Immanuelle starts to learn the secret behind her mother’s history, the dark power within her, and the rot at the center of Bethel itself.

This is the story of Alexis Henderson’s The Year of the Witching.

As our central and only viewpoint character, Immanuelle’s story provides a deep dive into a character focused novel, with a third person perspective rather than a first person one to widen the lens of the camera to give us a perspective of the scene and the world around her. The chapters all start with fictional epigraphs from writings in this fictional world, aiding in the worldbuilding and accentuating the literary aspects of the novel.

Books are important to this novel, at the core of what this novel is. Away from the magic and the storyline of Immanuelle, what this story is revolves around the written word. EArly on, establishing her character firmly as a reader, she visits a bookseller in hopes of getting something to read. Immaunelle’s venture into the Darkwood has her come away with her mother’s diary. And the books that the church owns, and also hides away, are important and plot relevant. Books and words have power to shape the present, to recast the past, and to shape people. The words of the Prophet are the main throughline for this, both when Immanuelle tries to live by them, and when her story, her belief, her history, and her actions bring her into conflict with them.

The novel explores a number of themes through the revelations of Immanuelle’s story, and the dark magic that infects her community after those revelations. The novel’s darkness is not splatterpunk or cosmic but is the darkness of corruption, of degradation, of a society, a culture, a place being consumed by a darkness of its own birth and creation in its attempts at purity and tyranny. The corruption and spiritual poverty of the Church, the Prophet and its theocracy are mirrored and reflected in the plagues that strike Bethel. There is a real sense of not quite comeuppance, but rather, the “birds coming home to roost”. Where the novel shows its real power with that thematic element is putting the main character front, center and forward. Immanuelle is horrified by the plagues and works to try and counter them, even as she has a tie to the Darkwood and it’s history that she struggles to understand.

The power of women, when it is pent, restricted, and controlled by society is also explored in this novel. Immanuelle at the beginning wants to conform to her society's very limited expectations for the role of women, a very restricted space for them in which to operate and exist. The existence of the witches and witchcraft are but one of the daggers, as it were that challenge the accepted orthodoxy of the culture of Bethel. Immanuelle doesn't set out to be a fighter for her autonomy and freedom, but that desire just to conform to those limited spaces for women do not last in her.

To that end, Immanuelle and seeing the world through her eyes is the strongest and most abiding part of the novel. The worldbuilding beyond the bounds of Bethel and the Darkwood is deliberately vague and given the isolated nature of the community, this makes a lot of sense. I would have liked a little more underpinning to the world the author builds. That said,  the atmosphere and mindset of a community under theocratic rule, finding that rule undermined from without and within, makes for effective dark fantastic reading, sliding into horror, scene sketching. What looks like an idyllic, pastoral community that the protagonist wants a quiet life within (despite her birth) is in reality something far different. And what’s more, Immanuelle herself at the fulcrum of events. She turns from innocent, to unwitting agent, to actively trying to be an agent of good and positive change. There is a brief sojourn outside the community which helps accentuate for me that the novel is on its strongest footing being concerned with the wood and Bethel itself.

The Church and the Prophet and its relationship to the community, its theocratic rule, and its Puritanical approach to community felt really relevant in this day and age, even as it evokes the Salem Witch Trials and the Puritans of New England. The religion here is not quite a monotheism, but there is a definite uncompromising outlook of how to worship the divine. There is also a magic system of sorts, Gifts that various people have, ranging from giving a perfect name to a child to telling truth from lies. Tellingly, we are told early on that Gifts have become rare (and Immanuelle does not have one herself), an early indicator that all is not well within Bethel, no matter what the Prophet and his rule say to the contrary. The cognitive dissonance of a society denying the truth around them and believing the lies of those in power feels awfully on point in this day and age, and necesarily so. The Church's fear-borne and relatively ineffective responses to the plagues only highlight that.


The Year of the Witching is a dark fantasy, if not an outright horror novel, that uses the tropes of both to tell a dark story of witchcraft, revelation, prejudice, injustice, femimism, and the search and need for change. Horror and Dark Fantasy are not usually my cup of tea, but the dark brew of the novel suited me rather well indeed this time. Readers who are not enthused with such tropes and such atmosphere may well find less to hook onto as readers.

Bonuses: +1 for strong atmosphere for the dark fantasy and horror evoked.
+1 for excellent exploration and use of themes.

Penalties: -1 the worldbuilding, especially with regards to the world outside Bethel, feels almost too undefined and murky.

Nerd Coefficient 7/10   an enjoyable experience, but not without its flaws


Reference: Henderson, Alexis The Year of the Witching [ACE,2020]