Congratulations to Ariela Housman, for her Hugo nomination for best fan artist!

Ariela Housman discovered her love of calligraphy at a young age.  While still a teenager, she interned at an art studio that specialized in Judaica artwork.  She's been doing freelance calligraphy and scifi-fantasy freelance artwork ever since, often combining the two.   In 2015, Housman and her best friend Terri Ash started Geek Calligraphy,  where most of Housman's artwork is currently displayed and available for purchase.  Ash is happy to take the blame for Housman's recent addiction to steampunk.

In her artwork, Housman combines traditional inked calligraphy with very modern sayings and slogans, as can be seen in her Geeky Professional Oaths artwork, and if you're looking for something that appears even more old fashioned, look no further than her Illuminated First pages.  She combines words that published within the last few years, with artwork styles that have been taught for centuries.

In 2019, Housman and Ash proposed changes to the rules for the Hugo award for best fan artist, specifically, what counts as "on display"?   What if artists are unable to attend events, where their artwork will be on display?  Does going viral on twitter count as "on display"?  As the ways in which fans interact with artwork changes, shouldn't our rules change to match?

Housman was kind enough to answer my nerdy questions about how she got started in calligraphy, training to be  calligrapher of Jewish marriage documents (Ketubot) and other Judaica, why the current rules for the Hugo for best Fan Artist should be amended, and much more.

NOAF: What media do you typically work in? (paints, pen and ink, digital, mixed media, etc) How did you first get started working with these materials?

Ariela Housman: I usually work in ink and watercolor. I have been working with both of them since age 10. My parents bought me a set of watercolor pencils for my 10th birthday, and I got my first calligraphy lesson in art class at my school the same year.

AH: When I am not working with pure calligraphy, I gravitate to art nouveau. 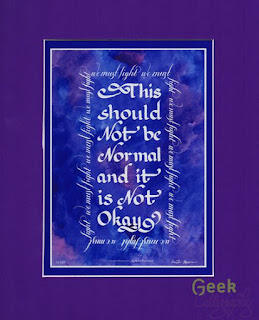 AH: I started my professional art career as a calligrapher of Jewish marriage documents (ketubot), which are usually decorated with art as well as nice writing. In the space of 18 months, I got two requests for ketubot with Star Trek art, one for Star Wars, one for zombies, and one for Steampunk. I realized there was an extremely niche market that was unfilled and got to work. Eventually I started doing other art prints that were not marriage documents.

AH: "Lady Astronaut Nouveau" and "Dragon Naturalist Nouveau" are, in some senses, a set. Both feature Jewish women who fought for their right to be included and recognized in their field. It was a privilege to get to work in the universes of authors whose work I had greatly enjoyed and to get to put my own interpretation of their characters out there with their blessing. 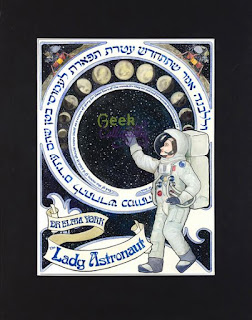 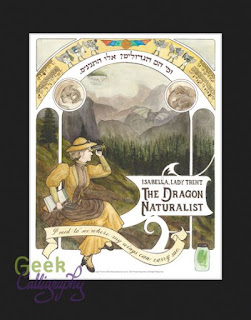 NOAF: How did Geek Calligraphy get started? How do you come up with all the funny (and serious) phrases? And . . . am I seeing the train cars from Ticket to Ride on the "Families that Game Together" print??

AH: When I was 17, I apprenticed at Caspi Cards and Art. That's where I learned to write ketubot. Mickie Caspi, the artist, told me that the secret to her success in the business was that she had a partner who managed the business side of things. Geek Calligraphy was founded on that model, with me as the artist and my best friend, Terri Ash, as the business manager. Terri used to work at a Judaica store where she handled most of their orders for ketubot, so she knows about the retail end of things that I don't. We have complementary skill sets. Getting to work with my best friend was a happy bonus.

When working on one of our Oaths, I tend to email a bunch of people in the relevant field and ask them to tell me about some of the common frustrations in their vocation/hobby/calling. I try to turn those into short, humorous sentences and then run them by my "test audience" again for feedback. The Judaica quotes tend to be something I come up with and run by Terri.

And yes, those are Ticket to Ride train cars in the "Families that Game" print. There are also a meeple from Carcassone, a settlement token and a city token from Catan, some Monopoly pieces, and many more. 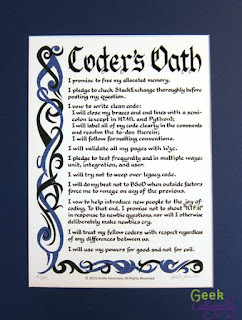 NOAF: I was thrilled to see that you do Ketubot, I wish I knew about you when my husband and I were getting ready to get married! I am so fascinated by contemporary religious calligraphic artwork! Is there special training or certification involved with making Ketubot and Mezuzah parchments?

AH: There is no certification necessary to make ketubot. As long as the officiant of the wedding is okay with the text, you're good. Mezuzot, on the other hand, are subject to a lot of strictures in Jewish law (halaḥah) about how they are written, on what, with what, etc. The term for someone who can write mezuzot, as well as the parchments of tefillin and Torah scrolls is "Sofer/et ST"aM," which stands for Sifrei torah, Tefillin, Mezuzot. Sofer is the male title, Soferet is the female title; Hebrew is a gendered language and totally fails at anything gender-neutral. There is no formal accreditation program for that; you apprentice with an experienced Sofer/et and when they say that you are ready to begin work, then you do. I did my apprenticeship for STa"M with Soferet Jen Taylor Friedman.


NOAF:  You run Geek Calligraphy with Terri Ash, and at Worldcon in Dublin in 2019, Terri submitted a very important amendment that could drastically change the rules in regards to what artwork is Hugo eligible. Can you tell us about the amendment, and what led Terri to submit it?

AH: The current rules for the Best Fan Artist category are ambiguous. They read:

The work by which artists should be judged is not limited to material published in fanzines. Material for semiprozines or material on public displays (such as in convention art shows) is also eligible.

This can be read narrowly, that only work in fanzines, semiprozines, and convention art shows is eligible, or widely, that anything "on public display" is eligible. When I was nominated last year, I was told by the Hugo Administrator that Lady Astronaut Nouveau could not be submitted in my portfolio for the 2019 Hugo Awards as it had only been displayed on the internet, not in a convention art show. "I'm afraid that the rules exclude pieces that have only been displayed online" was the exact quote.

We both found the idea that the internet did not count as a public display to be ludicrous. Terri put together that amendment as a band-aid on that particular problem.

NOAF: thank you so much!