Congratulations to Sara Felix, on her Hugo nomination for best fan artist!

If you've looked closely at recent Hugo Award bases, you've seen Felix's artwork! She designed the 2016 base, and co-designed the 2018 base with Vincent Villafranca. Currently the president of the ASFA (Association of Science Fiction and Fantasy Artists),  she was also the Art Director for the Dublin2019 Worldcon. Felix has curated art shows, designed multiple awards bases, and volunteered at, presented at, and sold artwork and jewelry at many a scifi convention.  If you enjoy abstract artwork where colors blend into nebulae and cosmic dreams, Felix is the artist for you.

For more information about the 2018 Hugo Award base,  check out Felix's blog post about how she and Villafranca first started talking about the base, their inspirations, and their design collaboration. You can of course, see much more of her artwork at her website, sarafelix.com.


Felix was kind enough to let me pick her brain about all things fan art - the joys of using different media, her experiences designing Hugo bases, the work she did with Dublin2019, and most importantly (at least to me), how she makes those gorgeous cosmic eggs.


NOAF: What media do you typically work in?

Sara Felix: I mostly work in alcohol inks, resin and acrylic paint. Mostly alcohol ink with a bit of acrylic as accent. So yeah, mixed media.

I started working in inks about a year and a half ago. Well, seriously at least.... before I dabbled not really knowing what to do with them. Then I took a class at a local craft place in Austin and fell in love. Mostly it was because I got to try out all the colors and see how they worked together. To me they are like space in a bottle. It is the sort of art that you can't control and really just need to relax and let the inks do what they want. 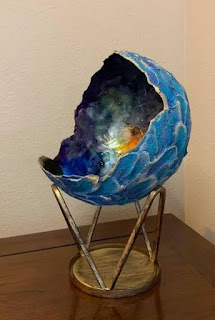 My resin work started years ago. My first big piece was about 20 years ago I made a table covered in my favorite comic book characters. A few years later I started making pendants. I went from using it as a way to seal in other art to an actual stand alone medium. Once I realized I could mix pigment powders into the resin I was hooked.

But overall I am really a bit of a dabbler. I like to play with different mediums and use them together. I have experimented with so much in the past I can now add in different mediums to get the effects I want.

SF: Abstract. Space-y. I know that is very technical art term. I tend to like in my ink art an element of science fiction that is almost subtle. You look closely to see the stars.

SF: I have been working on science fiction conventions since 1999. I started making silly polymer clay figures and someone said to me you should put those in the art show. So I did.

I am a big geek myself and so I create art that I want to surround myself with. At first it was just silly, but now I have a few different styles that I sell at conventions that seem to speak to the different sides of my personality.

SF: I think my piece for the Progress Report # 5 for Dublin was especially meaningful to me last year. I had worked on Dublin for so long and PR#5 was the last thing we released before the convention to the members. I had just started creating the portal series and that piece just worked. The colors fit Dublin, the logo fit perfectly in the center, and to me it felt like we have arrived and Dublin is now here.

But I really enjoyed all the pieces I made this year. I wish I had put in one of my more lighthearted sculptures but I really didn't get to do that much of that last year with all my convention work. 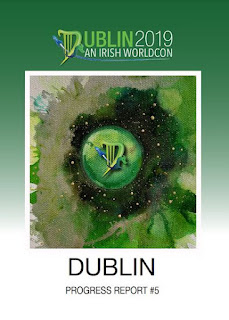 NOAF: Among other awards you've designed, You designed two Hugo base for 2016 and co-designed the 2018 base with Vincent Villafranca, Wow! What was that like, to be involved in the Hugo award design, and how did you go about designing them? Do they give you a mock-rocket to use in the prep-work?

SF: Both award experiences were so very different. 2016 was overwhelming. I sent in a drawing to the awards administrator and they chose to use it. They did send me a rocket yes, but there is also a great specifications sheet on the Hugo website. I worked with a company in Dallas that laser cut the wood while I created the rings and poured the resin and then I sent it back for them to finish the pieces, to pour a clear coat of resin and to add the acrylic on top. I based the design loosely on those fantastic tabletops people make with resin where it looks like a stream running through the wood. With the laser cutting available these days I thought creating planets in the wood would be a nice stylized look. The copper rings around the planets served as a way to keep the resin in place but also was a nod to the copper used in a lot of art deco jewelry pieces and is a prominent architecture style in Kansas City.

In contrast working with Vincent on 2018 was a dream. Vincent and I both were originally from California in the San Jose area so we presented to the worldcon team the idea of us doing the base for that year. The final idea was based on the Lick observatory in San Jose. For a few years I sculpted robots out of polymer clay that I sold at conventions and Vincent had also done a few robots so fit with both our styles to have robots at the observatory using telescopes to look off into space. Once we locked in the concept then Vincent came to my place to sculpt one afternoon and to discuss the base under the robots. A few weeks later I sent off my finished pieces to him and he did the bronze pouring. When they were almost done one weekend I went out to his ranch and we shot a video to show at the convention during the ceremony. 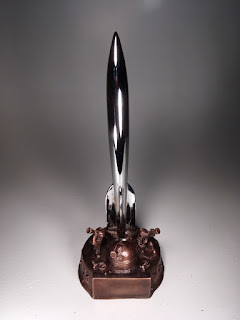 NOAF: Speaking of Hugos, you were the Art Director for the Dublin Worldcon. What was that experience like? How was it different (if at all) from what you expected?

SF: It is amazing. Iain Clark did such wonderful work for the convention it was fun to show it off. There is so much that the art director touches at a convention that the average congoer doesn't realize! From the Hugo stage props to the badges everything needs to keep a consistent look. But the convention team was wonderful to work with and they let me run with a lot of different ideas. For example I have always wanted to feature art that was not just two dimensional in the advertising of the convention. On two of the progress report covers I was able to use paper craft as the focal point of the cover. That made it more fun to me to interject my own style into the convention.

NOAF: Your Cosmic Egg and Dragon Eggs are incredible, there is a whole universe in there! What can you tell us about how these were made?

SF: Ah yes the eggs are really fun to create. I take a balloon and fill it with quick set concrete and blow it up to make the shape and then sit around rotating the balloon while I watch tv. When the balloon pops there is a fragile shell of concrete left behind. I use a coarse texture gel to make the scales and paint the inside gold. The outside is painted in acrylics and the inside gets a coating of alcohol ink to create the universe. The balloon/concrete step can be a bit temperamental. I can't even count the number of times that the egg shell imploded once the balloon was popped. But that is part of the excitement of the process. There was much rejoicing the first time I was able to make a concrete egg.