Lisbeth Campbell’s The Vanished Queen presents us a low-magic fantasy world where collective action and the power of revolution are set in a matrix of the story of a missing monarch, a prince opposing his tyrannical father, and a young woman struggling with the needs and costs of opposition to tyranny. 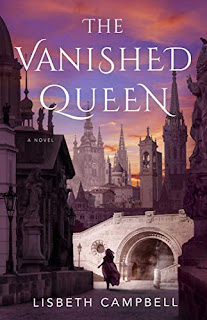 In an autocratic Age of Enlightement era fantasy kingdom, a Prince and the daughter of a General find common cause against the Prince’s father’s tyrannical rule. Even as a resistance builds and works against the King, the King’s rule becomes more and more unbearable, both for personal as well as societal costs. And the resistance that Anza joins has plans of its own. And haunting the novel like a ghost, in seperate sections, we learn the story of the titular, long ago lost wife to the King. Her story, the heart of the novel even as it takes place years in the past, has an inescapable shadow over present events.

This is the story of Lisbeth Campbell’s The Vanished Queen.

The story focuses on two characters and you might be forgiven at first for assuming this is a cross-class romance, but while there is attraction between the leads, this novel’s romance beats are few and take a back seat to everything else. Anza is the daughter of a general whose father gets purged by the tyrannical and increasingly erratic King Karolje in an Age of Enlightenment fantasy world. She finds a journal from the mysteriously disappeared Queen Mirantha, and events draw her to use her educated position, a rare thing for a woman, as well as skills learned by her father to join the resistance against the King.

Prince Esvar, on the other hand, has been personally oppressed by his father for years. His autocratic behavior can no longer be tolerated. However, his father keeps him and his brother, the putative heir, Tevin, off balance, and is casually cruel to both. Tevin would make a better king, and Esvar wants to get Tevin into that position and end the tyranny of his father. His father’s cruelty and pitting members of the court against each other leads him to the unthinkable--to make contact with the Resistance, through Anza (whom he meets by accident) to try and pry the King out of power

The resistance, of course, with Anza on the one hand joining their ranks, and Esvar a possible ally, nonetheless have plans and plots and goals of their own. Oppose Karolje as they do, they nonetheless have goals and ambitions beyond just installing another despot on the throne. They are an organic force, and the power of people to rise up against tyranny and try and take power for their own, and not be used as pawns is a palpable and well drawn throughtline for their own efforts.


Finally, by way of a long lost journal, Mirantha, the Vanished Queen of the title, tells her own story of a much more personal struggle against Karolje. His tyrannical and overbearing nature is shown to have deep origins, personally, as she struggles in an abusive relationship with her husband, struggling to keep her heart and mind free and strong, and also to try and ensure the legacy of her beliefs and her personal strength are passed down to her children., The very last thing Mirantha wants, as we find in the excerpts from her journal and from the chapters from her point of view, is the very real possibility of Esvar and Tevin being molded into Mini-me’s, and fighting to prevent that. The use of third person present instead of third person past for her passages not only helps them stand out from Anza and Esvar’s threads, but also gives her plight and struggle a deliberately cultivated immediacy.

I really enjoyed the worldbuilding in the novel as well. This is not a novel about a clash of armies, of a sweeping story to find the MacGuffin of power that will overthrow the dread Karolje, but instead this is the story of a city, it’s people and how it reacts and buckles and responds to tyranny and oppression from an autocratic ruler, and the worldbuilding supports that. Much can be divined about the world from the little details that the author provides here in terms of day to day life in the city and the culture of the society. One understated bit, since the characters in this novel really don’t have time for romance, is the bisexual default of members of the society. It’s not deeply relevant and central to any of the characters, but the fabric of the society is clearly marked as being far less heteronormative than our own.


Without trying to give too much away of how everything fits into place, I do want to say that the plotting and the lining up of the fate of the titular Vanished Queen and her legacy with the present time stories of her son, and also of Anza, all very nicely works together. The thematic resonance of Mirantha dealing with personal tyranny of her husband in her time frame resonates with Esvar’s struggles in the present, and both Esvar and Anza’s struggles with the political wide scale tyranny is real and strong. In addition, the plotting of both time frames, slowly over the course of the novel, intersects very nicely as well. I had wondered if the timelines had more than a thematic connection, and in the end, they most certainly do. It’s excellently written and polished, just like the characterizations.

The author could not have known, or intended it, when she wrote it, but the book’s themes and elements of the plot, in this moment of assessing authority, and the tyranny of that authority, the use of force against civilians, and even in this exact moment, the role of the army in that, makes the book’s author seemingly prescient. A weak leader holding onto power at every moment, a group of people around him of uncertain loyalty, using force or threatening force to put down opposition to his rule, and homegrown reactions to that rule having wide support? To say nothing of the control of information and news and trying to craft narratives, or use events to push a particular agenda.  The Vanished Queen feels like it is right in the cultural and political moment that IS 2020. The book’s nuance about how to respond to such rule, and its deep and sometimes uncomfortable questions about what response to such rule means and the costs of that response only heighten the book’s power and strength.

In short, this is a novel of political intrigue, and revolution, and what that look likes, from within the Palace and from without. The maneuverings of various people, and the personal and physical costs of those actions are where the plotting of the novel sings. This is a novel far more in the tradition of Sherwood Smith, say, than Django Wexler or Brian McClellan. It should also be noted that beyond being a secondary world, this is a fantasy novel with a relative paucity of magic. There is a plot-relevant ability to divine the truth magically, but not much more in terms of magic or supernatural elements to be found.

With engaging and deep writing, the themes presented in the book being relevant and resonant, and strong characterization, The Vanished Queen is a very potent fantasy novel. It’s not always comfortable to read, especially in the passages with Mirantha, and readers who don’t want to read about domestic abuse and sexual assault will do well to give the book a pass for their own mental well being. Mirantha’s story is inextricably woven into the book, and one could very well say is the POINT of the book. The front matter/dedication of the book is “For survivors. #RESIST.”

Other readers interested in a book where there is no one chosen hero, where the power of collective action and resistance are important, and who want their characters front and center in their fantasy fiction will find much to love in this book. Even better in many ways, the story is complete, a concise story told in one volume. (There certainly could be plenty of more books set in this world, but the story in this book is one and done).

Bonuses: +1 for engaging and deep-dive into character in the midst of a maelstrom.
+1 for its themes fitting very well in the topicality of our times with its story of revolution and the power of people to make change.

Penalties: -1 The darkness and events in Mirantha’s threads, with secual assault, is not for all readers.