Interview: Devin Madson, author of We Ride The Storm 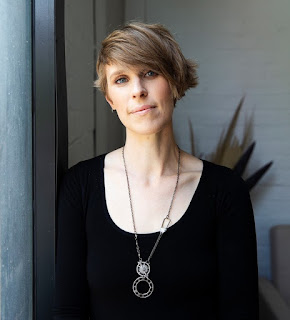 Madson self published We Ride the Storm in 2018, and then Orbit Books purchased the entire series. Fans of We Ride the Storm will be thrilled to hear that not only are the next two books books in the series completed and off to the publisher, but Orbit Books has also purchased Madson's Vengeance Trilogy, which takes place in the same world.  And if that wasn't an exciting enough 2018 and 2019,  in 2018 Madson won an Aurealis Award for her novella In Shadows We Fall.  You can learn more about Madson and her work by checking out her website DevinMadson.com, or following her on twitter, where she is @DevinMadson.

Taking place almost a generation after war nearly shattered the Kisian Empire,  We Ride the Storm follows a royal princess, a warrior, and an assassin as they come to listen to secret voices, understand their own history, and realize that the most unexpected person can wield the strongest power.  There is also lots of tea, beheading, and humor.  If you're a fan of Joe Abercrombie, this series is for you!

Madson lives in rural Australia with her family, where she enjoys playing video games and reading fantasy novels.  She promises that although she writes novels with tons of violence, that she is actually a very kind and squeamish person.    She was kind enough to chat with me about her experiences with SPFBO, creating the world and cultures in We Ride the Storm, her writing process, and our shared love of fried zucchini,

NOAF: In 2018, a large portion of the SFF blogosphere was introduced to your work through the SPFBO (Self-Published Fantasy Blog-Off). What can you tell us about your experience with SPFBO?

DM: The 2018 SPFBO was actually my second SPFBO experience, so I can say I’ve had both the meh and the wow experience with the competition. The year before, I entered The Blood of Whisperers, which I published in 2013. (It has since been picked up by Orbit, reworked, and is set for rerelease in August). I was knocked out in the first round, only a few weeks in, in one big long post cutting 23 books with a few sentences of review. So that was a bit deflating. Not bad though! It is at all times a respectful competition, so I was all ready to come back again when I had We Ride the Storm ready to go.

Which was… a far more stressful experience! I happened to draw a group with A LOT of great books in it. It was called the group of death and although I held on to a little hope, I was also preparing myself for what felt like the inevitable fall of the axe. When I made it to the semi-finals I thought well, that’s really what I was here for, to go that bit further than I had the year before. And then Booknest chose to cut one semi-finalist every day until they had a finalist announced and due to the time difference this was always being posted at about 4am my time and I was waking every morning in a panic and rushing to check. And every time it wasn’t me it only got worse because the hope was harder to ignore. To get all the way to the last two and get knocked out (to J. Zachary Pike’s excellent Orconomics) was GAH. Only to be caught by what they call the Senlin Safety Net and offered to other blogs GAHHHH. And picked up and put forward as a finalist by Fantasy Book Critic GAAAAAAAHHHHH. Look let’s just say it was a really intense and stressful time, because as much as you can tell yourself it’s not important, that it’s just a competition, that it has no bearing on the quality of your book, it’s impossible not to get caught up in the excitement of it and want to win.

Comparatively, the finals were far more chill. They started in 2019 and I first got contacted by Orbit in January, before they had really gotten underway, which ultimately made the finals less intense for me because I already felt like I had won in my own way. It left me very much cheering the others on and hoping I WOULDN’T win so someone else would be lifted up and seen. 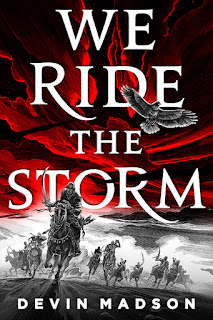 NOAF: I'm sure Grimdark has been around since long before the SFF blogosphere and publishers of genre fiction "discovered" it, but it feels like Grimdark became its own thing maybe ten or fifteen years ago. In your opinion, how has the genre of Grimdark changed and evolved in the last five or ten years? Where do you think the genre is going?

DM: I don't consider my books to be grimdark so I'm not sure I can answer the question with any great authority, but grimdark has to be the genre I see the most contention about what it even IS. I hadn't actually heard the term before I became part of the online SFF community in 2017-18. Now I tend to use the definition (though to my shame, I cannot recall where I first saw it) that true grimdark is a book in which the world is awful and broken, bad stuff happens and the characters have little to no ability/agency to change the world for the better. I think a lot of the seeming growth in grimdark is actually the tendency to label anything with a lot of blood or cynical realism as grimdark, which is a bit like labelling all books with kissing as romance when a romance novel requires more than a romantic plot to be considered that. But to actually get to the question, I think if you take out the gritty epic fantasy books that often get shelved here, there are a lot of interesting things being done in the genre at the moment, although I do wonder whether, given the recent trend of the world toward uncertainty and chaos, it has the strong future it otherwise might have had. It will definitely be interesting to see over the next few years what form the majority of our escapism takes, whether the current trend toward lighter stories will continue to prevail or not.

NOAF: We Ride the Storm is told from multiple points of view,  including Princess Miko, Rah the Levanti, and Cassandra the Assassin. How did you develop these characters? What was your process to ensure everyone's inner monologue and worldview was unique?

I don't pre-plan things at the beginning of a first book, so I give these things embarrassingly little thought before I start. In this case, the fact that each of the characters comes from a very different background and culture makes their ways of speaking and seeing the world automatically quite different from each other. One thing I did consider before starting, was that it would be fun to play with the idea of slightly unreliable narrators, in that people from different backgrounds and life experiences have different truths about the same events. Depending on which character I’m working on, I tend to consider the way they would talk and how it might be unique from the others. Cassandra is very to the point and dismissive, Miko eloquent and well-educated, while Rah is physically pragmatic but idealistic and views everything through the eyes of someone who hasn’t been in this empire before and doesn’t know its ways.

NOAF: The Levanti are a nomadic culture, riding their horses across the plains. They are now being pushed out of their lands by farmers and land developers.  This tugs at my heartstrings so much I can't even! Can you tell us more about how you developed the Levanti culture, and what inspired you to have a culture like this in your books?

DM: I am not a planner, so it wasn’t something I considered as a theme before I started, but as soon as it was there, I took it and ran. I love the idea of people who are caught between old ways and new, between ideals and realistic ways of life, not only as individuals but as a whole society. The rock and a hard place idea of having to change or fade. It is a heartbreaking and fascinating source of internal tension. As for the culture itself, while the Levanti aren't based on any specific real-world culture, they are my take on the concept of the nomadic horse culture, which is represented in many places both in our history and in fantasy fiction.

NOAF: We Ride the Storm is the beginning of a series. Without spoilers (if possible), can you tell us where the story goes from here?

DM: Hmmm, without spoilers… well it's a four-book series and everything is written except for the last book. There is more respectful head chopping, more sneaky politics and big battles, soul magic (and the first explanation of the magic system in my world), more trippy necromancy and divided loyalties, and you get a fourth point of view character from the second book! 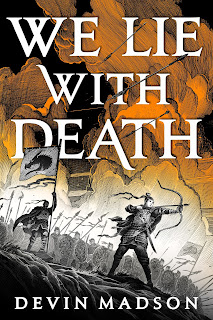 NOAF: What is your writing process like?  are you a plotter? a panster? somewhere in between?

DM: I am… all over the place. At the start of the first book of a new series I am a total pantser. I don’t plan or plot anything and often have no idea of either the journey or the destination. Or even who the characters are. We Ride the Strom started when the (original) first line popped into my head, "It's harder to sever a head than people think," and Rah and the Levanti were born from there.

But when it comes to later books, I find it much easier to have a vague plan in place. It’s easier to do because I already know the characters and the world and the conflicts and tensions, and can just extrapolate. I had a solid plan for the arcs of each character when writing the third book of The Reborn Empire, which helped me be sure I was heading in the right direction to tie it up in the four-book time frame. The only time I tried to plan a first book it ended up 99% different, with different themes and 5 extra point of view characters. Ooops.

NOAF: The day I researched you for these interview questions, you posted on twitter that you had started playing Animal Crossing.  I'm seeing Animal Crossing memes everywhere and half my facebook friends are playing this! What the heck is this game?

DM: I had actually never played it before this edition of the game, so my knowledge is nothing compared to people who know all the villagers and make amazing videos, but the best way I can describe it is like Minecraft but without monsters, with better graphics and a focus on cutesy, cinnamon roll capitalism. And very bad puns.

DM: Ha! I do love my fried zucchini. I just eat it fried in butter though, because I’m very not a foodie. My ridiculous number of dietary issues make anything more exciting not worth risking. I am one of the few people who eats to live rather than lives to eat, despite my love of zucchini and chocolate. Separately. Tempted to try them together now though…

NOAF: Thanks so much for chatting with me!