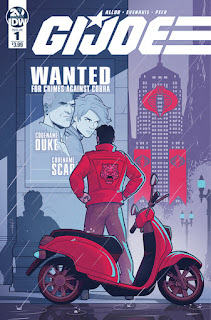 Pick of the Week:
GI Joe #1 - This review will contain some minor spoilers so keep that in mind as you read this. Cobra has occupied most of the world and the individuals who are trying to take back what Cobra occupies are facing an incredibly uphill challenge. Right off the bat, this is clearly a book for fans of the original series and is much more mature than the cartoon I watched as a kid. It is much darker and violent, but had me hooked early on.  Early in the book, a courier witnesses Major Bludd assassinate Duke. A character I grew up admiring was shot execution style and it was truly upsetting. This motivated the courier to fight back after he is tracked down by Scarlett after he found a thumb drive that is important for the rebellion.  I am really digging the more mature take on this and hope that somehow Duke isn't actually dead, although I have my doubts.

The Rest:
Star Wars Age of Resistance: Rey #1 - I have enjoyed the few Age of Resistance books I have read in preparation of the new film coming out this December and this one is no different.  We follow Rey on a quick stop in which she tries to overthrow an evil dictator on her way to find Luke Skywalker. Rey has quickly become one of my favorite characters in the Star Wars universe and this issue highlights how strong of a character is and how much she grew in The Force Awakens.  This book opens with an incredibly moving scene between her and Leia and has me stoked to take my family to the final movie in this saga in a couple of months.

Doctor Aphra #36 - I admit that I had the wool pulled over my eyes and did not expect this arc to end the way it did. Aphra was surprised to learn that Voor was planning on overthrowing the Emperor. As shocking as that was, the convoluted plan that she was using to surprise someone as in touch with the Force as the Emperor seemed destined to fail. Voor was relying on the actions of too many people and learned quickly that you need to search the Wookiee and Aphra remained one step ahead of her. The conclusion of this arc has me incredibly excited as it appears that she is about to once again team up with Vader, which was how we were introduced to her in the first place.  It looks like her character has come full circle.

Napoleon Dynamite #1 - This past year we shared the film Napoleon Dynamite with my 12 and 9 year olds and it was a huge success. They enjoyed the quirkiness and bizarre characters as much as I did when I saw it many years ago. This comic picks up right after the film in Napoleon's, Deb's, and Pedro's senior year. There is an attempt to make what worked well in the film translate to paper, but it just doesn't connect for me.  I can hear the characters voices as I read the dialog and Jorge Monlongo's artistic take on this series is phenomenal, but I don't know if we need a sequel, even if one of the characters is under suspicion for murder. This is a four book series and I'm not sure if I will pick up the next issue to see if it improves or not.