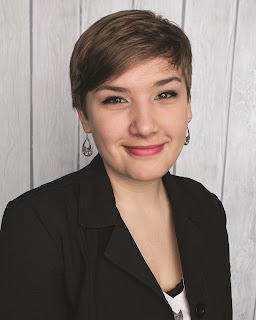 A textbook introvert who likes to throw out the textbook every once in a while just to see what happens, Elle Katharine White grew up in Buffalo, New York, where she learned valuable life skills such as how to clear a snowy driveway in under twenty minutes and how to cheer for the perennial underdog. When she's not writing, she spends her time drinking tea, loitering in libraries and secondhand bookshops, and dreaming of world travel.

Today she shares her Six Books with Us.

Right now, I’m working on A CROWN OF WISHES by Roshani Chokshi, which is the second book in her Star-Touched series. If you’ve never read anything by Chokshi, two questions: how close is your nearest library and what in the world have you been doing with your life? Opening one of her novels is like sitting down to a sumptuous meal, each page packed with every flavor imaginable: sweet and savory, spicy and tangy, bittersweet and satisfying. In A CROWN OF WISHES she starts with a delightfully ferocious heroine, adds a slow-simmering romance, plenty of danger, supernatural intrigue, and a splash of mythology, and voila! A story well worth devouring.

2. What upcoming book are you excited about?

It may be cheating to call this book upcoming (though I really hope I’m wrong), but I can’t wait for THE DOORS OF STONE, the last installment in Patrick Rothfuss’ Kingkiller Chronicles. His first two books blew me away in every possible way. The richness and depth of his worldbuilding, the loving attention to the art of storytelling, the careful and ingenious reversal of so many hero tropes . . . I wouldn’t say the Kingkiller Chronicles are perfect, but they’re awful close, and I NEED to know how Kvothe’s story ends.

I just finished VITA NOSTRA by Marina and Sergey Dyachenko (translated by Julia Hersey) and I’m already psyched to read it again. It’s a dark modern metaphysical fantasy that made me question everything I ever accepted about reality, and I would happily deal with a second existential crisis if it meant I got to spend another few days with these characters.

It’s difficult to describe the plot without giving too much away, but suffice to say that if magic were real, VITA NOSTRA would be the most accurate depiction of the effects it would have on the minds and bodies of the people brave enough—or desperate enough—to learn it. This is the story of a girl slowly ceasing to be human, and it’s beautiful and dark and heartrending and thrilling all at once. I can’t recommend it highly enough.

4. How about a book you’ve changed your mind about – either positively or negatively?
While I love science fiction, I’ve never been a hard sci-fi fan, so when I picked up Peter Watts’ BLINDSIGHT I had my reservations. I wanted to try something new, though, and thought what the heck, I’ll give it a shot.

Oh. My. Goodness. I didn’t think it was possible to read a 300+ page novel in one sitting. BLINDSIGHT proved me wrong. Watts managed to combine hard science, psychology, and philosophy with a pulse-pounding plot and characters who, despite their technological and biological augmentations, felt searingly real. I loved every white-knuckled moment I spent in that book.

Also, there are space vampires. And they’re terrifying. That’s a win in my book.

Ella of Gail Carson Levine’s ELLA ENCHANTED was and always will be the heroine of my heart. Hers was the first fantasy story I remember reading in which a young woman (awkward and insecure, just like me!) took the reins of her story and went out and happened to things, rather than allowing things to happen to her, and all this against the overwhelming disadvantage of a stupid fairy’s curse. She was just the kind of brave, feisty, compassionate, flawed-but-tenacious young woman I’d love to know in real life, and every time I read that book I felt like I was reuniting with an old friend. It’s my hope that a little of Ella’s spark will live on in my heroines.

FLAMEBRINGER is the last in the Heartstone trilogy, which began with a simple ‘what if.’ What if Jane Austen’s Pride & Prejudice took place in a fantasy world where all sorts of magical creatures lived alongside humans? And what if Mr. Darcy, instead of being the master of Pemberley, was a dragon-riding monster hunter? What would that story look like? The first book in the series, HEARTSTONE, answers that question. The sequels, DRAGONSHADOW and FLAMEBRINGER (coming soon!) follow our fantasy Darcy and Elizabeth as they fight to save their kingdom from an ancient awakening evil, all while navigating the tribulations of married life as professional monster hunters. Look for FLAMEBRINGER in stores in November!