It is officially September and things are starting to get a little bit spooky. My wife and I saw Scary Stories to Tell in the Dark over the weekend and quite enjoyed it.  With It Chapter Two coming out this week it only seems appropriate to start the Halloween reading a bit early this year. 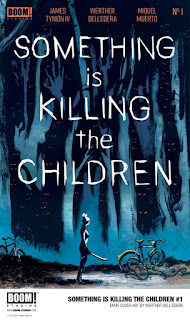 Pick of the Week:
Something is Killing the Children #1 - When I saw there was a new horror book written by James Tynion IV it jumped right to the top of my pull list.  Something is Killing the Children is about....something...that is killing the children. James is the only survivor from the first incident in Archer's Peak when a mysterious creature the size of a tree killed a group of teenagers. The police and town folk don't believe James, but a mysterious stranger, who is going from town to town killing monsters, says that she is there to kill it. It is a pretty simple premise, but the character design from Werther Dell'edera and fast pace of the first issue hooked me immediately.  It will be interesting to see how James attempts to confront both his inner demons and the very real one he has volunteered to help kill. I am also intrigued to learn more about the young lady who has already established herself as a cold blooded monster killer in this issue. I cannot wait to read more of this book as the weather cools off and Halloween decorations start to pop up in the neighborhood.

The Rest:
No One Left to Fight #3 - Hell hath no fury like a woman with magical powers scorned.  Winda finally makes her move on Vale, but his heart belongs to his sister-in-law and Winda does not take kindly to it and takes it out on Vale.  As he is recovering outside from the beat down, and from whatever is currently impacting his powers, he runs into The Hierophant, a dark being who offers to heal Vale and turn him into a being similar to him.  It was interesting to meet a new character and to see a bit more of how the condition is impacting Vale, but the overall issue was a bit slower than the previous two. This book is still a lot of fun and one I highly recommend checking it out. Fico Ossio is absolutely killing the art in this book and is bringing some radical color with the help of Raciel Avila.

Redneck #23 - Desperate times call for desperate measures.  After failing to convince Greg not to join forces with Carrona in an attempt to take down the Parliament of Vampires. His dad passes down a special revolver that has been in the family for generations that was forged from an old church tower, was consecrated, and is a vampire killing machine. It has never been used, but it is the emergency plan that might save, or take, Greg's life.  Perry is on the road to recovery and wants to make sure that Carrona never gets a chance to kills her brother Greg, his pregnant sister, or his father.  She decides to team up with the only vampire who can outmatch her telekinetic abilities, Evil, in a desperate attempt to save her brother.  What could possibly go wrong in unleashing the very being that blew up Bartlett's wedding.  Things are about to get extremely messy and I am all for it.