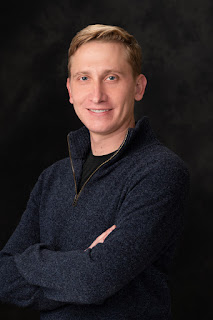 Brian Naslund  had a brief stint in the New York publishing world but quickly defected to tech in Denver where he does internet marketing. You can find him online at www.briannaslund.com, on Twitter as @BrianNasl.
Today he shares his Six Books with us.

1. What book are you currently reading?
I’m currently reading The Ship of Smoke and Steel by Django Wexler, and loving it. I was a big fan of his Shadow Campaigns series, but this one is a big change from his “flintlock fantasy” stuff. The book features an Asian-inspired world that’s full of magic, criminals, and a mysterious, massive ship that’s crammed with exiled mages, mushrooms, and horrific sea creatures.I’m only about halfway through, but as soon as I’m done writing these answers, I’ll definitely be going back to it and probably staying up past my bedtime reading it.

Like a lot of “grimdark” fantasy readers, I’m fired up for Joe Abercrombie’s A Little Hatred. The First Law universe is one of my favorites, and I can’t wait to see what he does with old and new characters. Also, once it’s out, I can finally stop re-reading my favorite scenes from The Heroes to get my Joe fix.

I actually saw Jeff VanderMeer’s Annihilation in a bookstore window the other day, and seeing the cover sparked a strong desire to dig up my old copy (it’s deep in a box from my recent move, but this is good motivation to finish unpacking).
His descriptions of the truly insane flora and fauna of Area X are intimidatingly good. It’s one of those books I love to re-read, but also wind up feeling a wee-bit inadequate as a writer myself because he did such a brilliant job 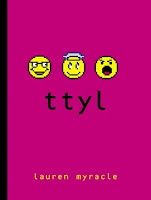 This is going to come out of left field, but "ttyl" by Lauren Myracle is a book I scoffed at when I heard the premise, but wound up absolutely loving it.

It's a YA novel centering around several friends entering 10th grade, and the entire story is told through their instant messages to each other. My sister was reading it, and after my initial cold-shoulder when she described it, I picked it up and read the first few pages. Cut to two hours later and I can't put it down. Meanwhile, my sister is yelling at me to give it back. Ah, siblings.

5. What’s one book, which you read as a child or a young adult, that has had a lasting influence on your writing?
The Winter King by Bernard Cornwell probably had the biggest influence on me as a kid. His books are different from mine in many ways, but there are two big similarities: swords are involved, and Cornwell took these legendary figures from folklore (Arthur, Merlin, Guinevere) and pinned them down in a realistic world full of dirty fingernails and intimate details.


I'd never read anything like that before, and it has stuck with me as I've populated by own stories with dragons, living legends, and epic quests, but never forgotten to sew it all together with a lynchpin of gritty details.

My debut fantasy novel is Blood of an Exile, the first in the Dragons of Terra series, out now from Tor Books. It's part Wolverine, part Games of Thrones. The story follows the Flawless Bershad, a former lord who was sentenced to be a dragonslayer-a vocation that typically ends in death within a week. Bershad's managed to last fourteen years, and has become a grumpy and cynical living legend because of it. Then the king who sentenced Bershad to his fate gives him a chance at redemption. Kill a foreign emperor and walk free forever.

Why's it awesome? Well, I mostly wrote the type of book that I would want to read, which is a fast-paced adventure fantasy with a lot action, interlaced with humor, some serious bits, and lots of complicated characters with interesting relationships. I'm a little biased, but I think the book succeeds on all fronts.