Empress of Forever is a rollicking, audacious, technicolor space fantasy opera that fully embodies its aesthetic and ethos while providing an over the top adventure. 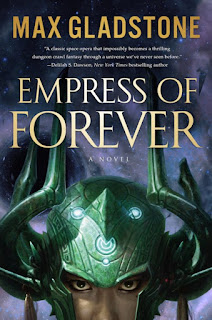 Max Gladstone’s  novel begins with Vivian Liao. Vivian is a Elon Musk type tech billionaire who has made far too many enemies among various governments. So, a retrench and reboot and a plan to come back stronger are in order. But in the course of her escape, Vivian is captured and brought to a far future (or is it just far away in space) in a universe with strange monks, killer robots, pilots who can bond with their ships, space pirates and much more. Including, and most importantly, the titular Empress of Forever.

After that measured beginning, setting up Vivian on Earth briefly enough to rip her away from it, Vivian’s plunge into an outer space world is a wild ride from the moment she lands on the Mirrorfaith ship and meets Hong, one of the other main characters of the novel. From being under attack by robots, to freeing an extremely dangerous space pirate  who has been locked up for a very long time, Vivian goes down the rabbit hole fast. Her goals are straightforward at first--to find the Empress who has brought her to this time and space, and find a way to get back home. In entangling herself with Hong, and  Zanj (the aforementioned very dangerous space pirate), Vivian’s path, if not goals,  go off course almost immediately. In that tangled new course, Vivian meets new allies, new enemies and in the end, finds out the truth of the Empire and why the Empress has brought her here in the first place.

For all of the technobabble that the novel has, from the start as we learn about Vivian’s life on Earth in a couple of short set up characters, through the major facets of her universe, like the hyperspace Cloud, there is a definite science fantasy feel to all of the proceedings. Not only is it technology indistinguishable from magic (which the novel has in plenty) but there are whole portions of the novel that feel like they are even more closer to the fantasy section of the spectrum. Vivian and her friends, for example, landing on the ruined planet of Orn, find themselves in a post-apocalypse society and a problem that, as the author handwaves with Vivian’s thoughts, straight out of Beowulf. Later in the novel, as the author cranks things up to 11, the science as magic really does feel more and more like magic. The science fantasy nature of the novel reaches its zenith.

And on that way, we get a space opera/space fantasy universe that is full of sights, sounds, impressions, set pieces and environments.  Overall, I could see how Empress of Forever could and would play out on a screen--but as an animated feature, i think. This novel would bust the budget of any studio with trying to do practical effects and CGI with human actors. (Think Jupiter Ascending, to a square or cube power). Between the environments, the cinematic writing at the end, the larger than life characters, and the sheer inventiveness that the author brings means that this novel really works well for visual readers. If you are the kind of reader who relishes in those details, sights, sounds and experiences in your head as you read, Empress of Forever, after that early portion on Earth is done and Vivian is on the Mirrorfaith ship, the novel is most definitely for you.

That said, however, the novel, like many of the author’s novels, lives and grows on the strength of the cast. Taking the aforementioned Vivian, and Hong, and Zanj (space pirate for the win!), we have characters like Xiara, a preternaturally good space pilot and Gray, a graygoo creature, to fill out Vivian’s found family/team. They squabble, they fight, they come together and all have interesting character arcs, developments and growth. In a sense, I think Vivian, even though she is our Earth viewpoint character who we can relate to the most, is not even quite the most interesting character in the book. Given Hong (who feels in a sense to be the author’s most beloved character, since he gets to say a phrase that I’ve heard the author say himself in real life), Zanj (Space Pirate!) and Xiara (space pilot from a post apocalyptic world), the novel is rich with protagonists whose stories and personalities resonate. They are the heroes of their own stories.

And then there is the titular Empress herself. Most of the novel is experiencing and reacting to her from various points of view, various reactions, impressions, and even legends and myths for what people think of her. This gives her a larger than life quality that reminds me of the hints we get about Thanos in the early Avengers movies, until he actually starts to take action himself. The Empress’ goals, enemies and motivations are, to remain as non spoilery as possible, extremely grounded and well thought out. Even as Vivian and her friends oppose her and all of her works, what the Empress is really after, once it becomes clear, is logical and makes sense. She IS the hero of her own story, too.

The author keeps us mainly in Vivian’s point of view, but we get sections with the other characters, giving us a very good understanding of who they are, what they are about, and why as a reader we should care enough to follow their stories. In the last portion of the novel, as all actions and moves go to a conclusion, the author tries a little more cinematic of a technique, cutting between points of view to show us different portions of a wide ranging conflict.

The major thing again to keep in mind about Empress of Forever and deciding if it is for you really ties back into the expectations of the novel. This is not the hard space opera that you might be expecting or wanting. It’s side step into more fantastical realms, putting it in more the mind of space opera-science fantasy. However, this does not always quite work. The novel goes sideways phantasmagorical at times with an over the top world that the author is trying to describe, and sometimes, the author does exceed his grasp in that regard. Early on in the novel, before things get truly and utterly weird, the novel is on point, beat perfect and flawless. As the novel progresses, and as we get a sense as to what really is going on, and the universe becomes more defined, the action and events, paradoxically become just a tad fuzzier than I’d like. It’s minor, but it was noticeable for me.

That said, however, Empress of Forever is what you get if you decided to marry a traditional Space Opera narrative with Flash Gordon, Journey to the West, numerous Anime properties, Farscape, Jupiter Ascending, and most centrally, I think, Guardians of the Galaxy. When it works, Empress of Forever is  one of the best novels I have ever read. When it slips from that exalted mark, it is “merely” one of the very best books I’ve read this year.

Bonuses: +1 for excellent and inventive worldbuilding, a unique and interesting verse
+1 for an intriguing and varied set of main characters.

Penalties: -1 for not always hitting the science fantasy mark.