The eagle eyed among you will note that this August edition of Questing in Shorts is, in fact, coming out of September, and with a jam-packed September on the cards, its going to have to serve the purpose of two columns in one. August has been a great month for buying short fiction, especially in anthology form, but a less successful one for reading it and a particularly unsuccessful one for making sure I have comprehensive notes to hand on what I've read, meaning that there's been a lot of swift rereading to get up to speed this time around, and a lot more general impressions than story specifics. Incidentally, if anybody has any bullet journal type hacks for keeping track of short fiction thoughts (with bonus points if they'll work on a train commute), do hit me up on the Twitter place, as I'd love to hear how other people manage it...

The Assimilated Cuban's Guide to Quantum Santeria by Carlos Hernandez. 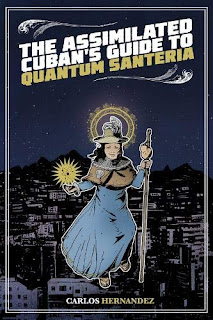 With a title like that, I'm surprised I hadn't heard of this collection before it came to me in the Latinx Storybundle last year. In this set of stories, Hernandez marries together humour and weirdness in a collection with a ton of heart, following largely sympathetic characters as they deal with upheaval, and displacement both cultural and temporal, and the occasional grimly hilarious body horror. Highlights of the latter are the trio of stories featuring Gabby, an investigative journalist whose stories include a far-too-realistic VR panda sex experience ("The International Studbook of the Giant Panda"), an encounter with a trans-dimensional unicorn in an area known for poachers ("The Magical Properties of Unicorn Ivory") and the custom piano of a newly dead pianist, which may or may not now hold his soul ("Fantaisie Impromptu No. 4 in C#Minor"). Overall, its a collection that balances the funny and the poignant well, and allows its characters to get into some distinctly awkward and embarrassing situations without depriving them of respect and agency - definitely one to look out for.

Ambiguity Machines and Other Stories by Vandana Singh 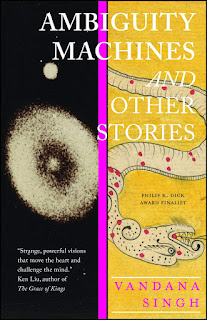 This collection is Singh's first in the USA, and it's a demanding gem of a book: full of stories which shift effortlessly in time and place, drawing narrative lines between the incomprehensible cultures of far future spacefarers and South Asian mythology and storytelling. This isn't a collection that can be rushed through, as each story requires attention to the parallels and changes in the text. But it's well worth the effort: a book that's very different from any science fiction I've ever read, and one of the most rewarding collections in its postcolonial vision of what humanity's distant future might look like. Standouts for me were the titular "Ambiguity Machines", a weird, beautiful set of linked stories with a framing device in the form of an examination text and "Somadeva: A Sky River Story", in which an 11th century poet becomes a spaceship AI. And rounding out the collection beautifully is Requiem, a foray into climate science fiction which draws parallels between the warming of the arctic and the loss of culture it means for native communities, and the relationships with animals who are themselves trying to survive in a changing world. Its all told through the lens of an Indian woman visiting the community following her father's death. I'm so glad I spent the time with this one, and there are stories here I expect I'll be thinking about for a long time to come. 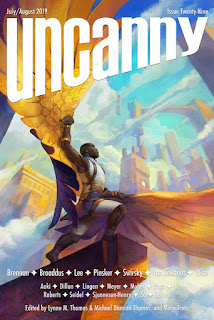 I found this issue of Uncanny a delight from start to finish, from the creepy flash fiction budget shopping trip in Greg Van Eekhout's "Big Box" to "On the Impurity of Dragon-kind", a story by Marie Brennan in the Lady Trent canon, which offers a funny, world-expanding take on her son's religious confirmation told through the lens of his speech at the ceremony. There's a creepy new Sarah Pinsker story about a supernatural murder in the woods during a writer's retreat, and although the climax to this one is a little more "infodumpy" than I'd consider ideal, it's still a conceptually strong pay-off for a neat mystery set-up, and the fact that it boils down to the relationship between two women is all good by me. Hitting all the buttons with technical accomplishment as well as concept was "The Migration Suite: A study in C Sharp Minor", a story which traces the various migrations of Black people through prehistory and early civilisations, through to escapes from slavery and 20th century migrations, and then on to a final "movement" into space. The use of the musical metaphor - which allows Broaddus to talk about movements in a dual sense - satisfyingly brings together elements that could otherwise feel very disparate, offering changes in mood and tone as a composer might direct their notation to be played. And the speculative future it offers is one that meshes grim and hopeful in a complex, powerful way.

"Compassionate Simulation" by Rachel Swirsky and P.H. Lee, and "How the Trick is Done" by A.C. Wise, both offer heartwrenching narratives which grapple in different ways with patriarchal powers and modes of resistance, even in the most grim of circumstances. Finally, the reprint here is a story that previously only had limited release on Patreon: A Champion of Nigh-Space by Tim Pratt, in which a man finds out that the odd parts of his otherwise brilliant relationship have a far more dramatic, superhero-esque . I also enjoyed that the relationship between the main characters is unapologetically kinky without any on-the-page erotica or a sense that this detail needs to be at the heart of the story as a whole. On the whole, this is a fantastic issue, and a great note on which to celebrate Uncanny's latest win in the Semiprozine category. 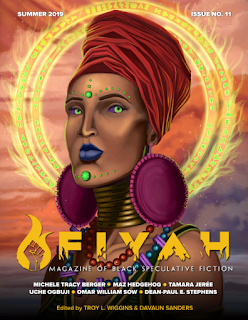 It's another unthemed issue of FIYAH this quarter, and one featuring one of my favourite short fiction writers in the novelette slot. Though I haven't read much of Michele Tracy Berger's writing, the stories of hers I have experienced all weave together creepy, compelling science fictional narratives (the alien contact gone horribly wrong, the miracle product that isn't) with historically Black struggles at the points at which she's writing, centring Black experiences and the everyday horror of structural racism in familiar tropes. The novelette here, Doll Seed, is another great example of this: taking the idea that toys come to life when humans aren't looking, and that their purpose is to make the lives of children special, she tells the story of Chevella, a Black doll who ends up in a toy shop in 1950s America and her experience of racism experienced through her own personhood and her identity as a symbol of race. Forgotten toy narratives are generally heartbreaking and this one definitely doesn't let up on the emotions, while also containing some pretty horrifying moments.

The short fiction in this issue is also great. Omar Sow's "Ibrahima and the Green Fishing Net" is a short, queer, emotionally resonant tale of love lost and found in the ocean, sweeping the reader along in a non-linear narrative to its inevitable conclusion. "Pimento" by Dean-Paul E. Stephens tackles concepts of artificial personhood in its depiction of a future Kingston which has ostensibly given equal rights to androids (but still treats them as second class citizens), and a restaurant owner who is offered the chance to cater for an Emperor of a planet which still treats them as slaves, and chooses to use it to promote the skills of an android on his own staff. With the relationship between the narrator and Ivan - and the narrator's confronting of their own internalised prejudice and expectations - at the heart of the story, its one where the characters will stay with you long after the words run out. Rounding out the issue is "When You Find a Dragon, Name Them For Me" by Tamara Jeree, an atmospheric quest story which again has a relationship (and a memory dragon!) at its heart.

Beyond the Line of Trees by Vida Cruz. 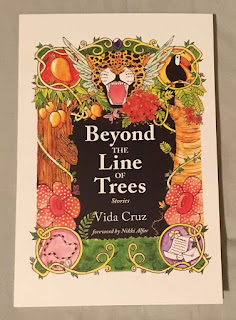 This gorgeous illustrated collection offers four short stories from Vida Cruz, a Filipina author and former Tiptree fellow. I hadn't come across any of these stories before (one is a winner of the Writers of the Future contest, which despite the controversy surrounding that particular event is an amazing achievement!) and jumped at the chance to pick up one of these super-limited first printing chapbooks to familiarise myself with Cruz's writing. I was not disappointed! The stories here deal with the intersection of supernatural forces and of human societies grappling with traditions and change in many forms. Its hard to pick favourites, but the standouts for me were "The Song of the Mango", the story of Saha a woman whose brother is killed and turned into a magical healing mango tree, sending her on a path from being a dissatisfied handmaid to the village leader to a grumpy mango witch in a forest, to her capture by conquering forces and eventual escape. Saha's narration - told in the past tense from a significant distance, which adds to the mystery of the story - is gloriously bad-tempered, and the worldbuilding is detailed and interesting, making me wish I could get a mango worth eating without getting on a long haul flight!

The final story, "Odd and Ugly", weaves a non-linear love story into a fable with strong overtones of Beauty and the Beast, with a story between a kapre, or tree spirit, and a young woman who invites herself in as his housekeeper. As the tale unfolds we learn more about the kapre's history (an african slave brought over to the Philippines during the colonial occupation), and the heartbreaks past and present of both of the main characters. Sadly this initial printing is already sold out but if you're interested in Cruz's work, I'm told that a second run in the works and will be available from the lovely folk at Portal Bookshop in future.

One of the things I picked up at Worldcon was a chapbook of Japanese flash fiction pieces in translation, called Intelligence: Artificial and Human, put together by the AIxSF project. I don't think I'd read anything from the eight authors contained within and it made for an interesting, if quite cursory, exploration of various topics of artificial intelligence from some of the authors who are thinking about this at the moment. Because the focus is on the practical intersection of human and artificial intelligences, many of the stories feel like a snippet of a longer narrative rather than a more fully fleshed out idea at the particular length (a format which I think is more effective when things are... weirder) and for several stories, particularly the one by Taiyo Fujii, I think the length was an obvious constraint. I'd love to see a slightly more fleshed out version of this, and while at the moment I think it's a Worldcon exclusive, if the material ever makes it online it'll definitely be of interest to fans of translated fiction.

This was also the month I finally got around to reading Hope in the Dark, a zine from Fireside Fiction which I backed during its kickstarter last year. This cute illustrated DIY collection, of six stories which are all available online from Fireside fiction, brings together some very different (and again very short) pieces around the unifying theme of hope in the most difficult of circumstances. Of these, the first was a particular standout, positing a post-apocalyptic world in which people's willingness to help each other is a unifying characteristic.


POSTED BY: Adri is a semi-aquatic migratory mammal most often found in the UK. She has many opinions about SFF books, and is also partial to gaming, baking, interacting with dogs, and Asian-style karaoke. Find her on Twitter at @adrijjy.
Posted by Adri Joy at 12:00:00 AM