Microreview [book]: The Perfect Assassin, by K A Doore

In K A Doore’s The Perfect Assassin, a reluctant young man, trained to be an assassin in a time where such work seems to be a thing of the past, learns that his skills become necessary when a death threatens the social fabric of his home city-state of Ghadid. 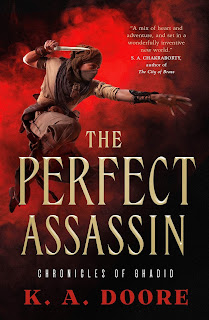 Amastan would rather be buried in scrolls and the written word. Unfortunately for him, he was born into a family that has for generations provided a rather deadly service to the powers of the city, assassinating those who have transgressed the laws in a way that their death is necessary. Amastan doesn’t want to be an assassin and is openly relieved that their services have not been engaged in years. And still, he has trained and perfected his skills in the hope that they never actually come to pass. This works for him as a life until an assassination occurs. Worse this assassination was deliberately done in a horrific manner: The body was not laid out for people to find quickly. What this means is that the spirit of the dead person was not consecrated properly, an act that not only is impious but also produces a supernatural creature, the Jaan. The malevolent Jaan is capable of possessing and driving people mad. It’s a legitimately terrifying creature.

Amastan and the rest of his fellow assassins are under suspicion for the murder, and so, to save himself and his family, to catch an assassin, you must set an assassin. Amastan, being a witness, and for other reasons as well, is chosen to be the lead person to investigate the murder. And so Amastan delves into the role he never wanted, to save himself and his family. And perhaps his city-state in the process. Amastan is the protagonist in K A Doore’s  debut novel The Perfect Assassin.

The center of the novel is Amastan’s story and we get the entire novel from his point of view. He is a historian, a records keeper, someone immersed in documents and research, whose ability and skills as an assassin makes for, at first, a really strange “cross-class”. However, the novel does make it clear that his ability to run down information becomes important, and attention to detail, research and deep diving are important to properly doing the job as an assassin in the Basbowen family. We get a good perspective of Amastan’s life, his thinking, his emotions and passions, His conflicted nature over what he has been tasked to do, and how it intersects on a personal level once he "becomes involved" is very well done. We get to see how conflicted he is about his job, especially as a relationship with Yufit, a person Amastan investigates to get more information about the murders, starts to deepen and become more serious.

I also did like how Amastan was situated, not only within his peer group, but within his family, and the city as a whole. There is a really well thought out relationship map here of the various people in Amastan's life, who have their own agendas and perspectives that, while we only see them from Amastan's point of view, come across as agents of their own narratives. They are a diverse group, in terms of gender and sexuality (including but not limited to Amastan himself), and Doore' book easily and effortlessly makes a world where queerness is casually accepted.. I am really enjoying how writers like Doore are making that more and more something I expect in my reading.

In addition  Doore’s witing does provide a very sensory-rich look at his life. From the feel of the paper of scrolls to how his shoulders ache after a particularly hard bit of movement, the writing effectively brings the experience to a reader. I appreciated the vividness in the text.

The worldbulding is both interesting and just slightly frustrating at the same time. Ghadid is set on supports hundreds of feet above the desert floor below. The reason for this, the xxxxx that roam the desert, as well as providing physical security, gives the city a Middle Eastern feel but with inventiveness and invention unique to the author. The use of water as a currency is a logical extension of it, and the ticking clock of the city trying to hold out until the yearly rains arrive is an interesting mechanic, story wise, to use for the novel. It also shows quite nicely how precarious and how life in Ghadid is, at times of the year, quite marginal. There is also some good worldbuilding baked in that shows that such a community in the end only works if it acts and works as a community, people working together and supporting each other. However, when the water simply is not there, it simply is not there. Resource management is important in a desert city, and resource depletion is keenly important, and the novel conveys that.

In addition, I liked the idea of the Jaan and the metaphysics around them. From a plotting and mechanics and worldbuilding standpoint, it almost feels like it’s the main bit of worldbuilding that much of the rest is built around, including the plot. If someone dies and is not properly cared for, you get an jaan, which is an existential threat to all and sundry around them. This partially explains some of the facets of how the assassins work and operate (leaving a body so that it is not found is a big no-no, hence the driver of the plot), to a reason why the city is built to stand above the desert floor, to events that occur to Amastan as part of the plot. There are hints.of deeper and more dangerous variants, but those references and that strand is a bit scanty.

And along that line, the  world building Doore presents did frustrate me a bit in that it raised questions about how the city works that the novel doesn’t address. I strongly wanted to know more about how some facets of the society worked and aspects of the metaphysical portions of the universe. Although the book does linger at points on building the world, I think at some points the text is much more of a veneer and obvious trompe l’oeil than fantasy novels always effect in a reader.

There is a significant amount of roughness in the plotting and pacing I found. It was mostly upon reflection, after thinking about the book that the flaws in it were a bit more apparent and glaring. The worldbuilding and the characters, particularly, were the two engines that propelled through the novel, and it wasn’t until after the fact that the areas where the novel could have been stronger became much clearer in my mind.The novel IS a murder mystery much more than flashy action, but even given that chassis, the pacing and plotting could have been much smoother. Readers who want a clockwork jewel of a murder mystery plot are going to be disappointed on what is offered here.

The other thing to keep in mind for some fantasy readers is that while Amastan is an assassin in his own mold, and ethos, and style, and personality, it is not precisely the least tread ground these days. I wouldn’t directly compare him to a lot more Grimdark infused protagonists except for the most basic and fundamental level. It is, as they say, what precisely is on the tin. And yet it is something more, and tries to be more. It doesn't always succeed as much as I'd hope but I see the potential here.

Based on the characters and the world presented, however, I am interested in continuing to follow Amastan’s story in subsequent volumes from the author. (The Imposible Contract, a sequel to The Perfect Assassin, comes out this fall)  Doore has put a lot of work and thought into her world and her characters, and that enthusiasm, as expressed on the page, makes me want to learn and experience more with them.

Bonuses: +1 for excellent and inventive worldbuilding, a unique and interesting fantasy city.

Penalties: -1 for roughness in plotting and pacing.