The first book for the return to the world of Locke and Key has a name and has a release date. On October 16, Joe Hill and Gabriel Rodriguez are bringing us back to the Locke family in a book entitled Dog Days.  Rodriguez teased some art on his instagram and I couldn't be happier!  Just over one month to go! 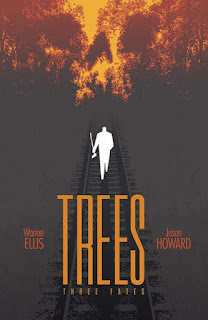 Pick of the Week:
Trees: Three Fates #1 - Fresh of getting a television adaptation of the original series, Warren Ellis and Jason Howard have returned to the world of trees. This books takes place in Russia, where the trees fell 11 years ago and the residents of this small town are still adjusting. Things take a dark turn when Klara Voranova, a police officer, is alerted to a dead body.  The mangled body was found near one of the trees and it appears that there is a lot going on behind the scenes in this small town that Klara doesn't know about.

The Rest:
Babyteeth #16 - Five years have passed since Sadie's father sacrificed himself in order to save everyone.  We cut to five years later when Sadie is still trying to make everything right and is currently separated from her daughter and recording videos.  If I remember correctly, this is where we started in issue #1.  She is telling the video of how they escaped from the devil and made it out of Hell.  It is nice that this book has come full circle, but Joshua Williamson is keeping the reader on its feet as the bomb that is dropped on Sadie when she decides that she should head home was quite shocking.

Daredevil #11 - Matt Murdock better get his stuff together quickly or a lot of people in Hell's Kitchen are going to get hurt.  Not only is he not offering them his protection, despite Electra wanting to help, imposter Daredevils are taking the law into their own hands and don't have his restraint. It also looks like Mayor Fisk's power might be nearing its end thanks to Owlsley.  An attempt to get Owlsley out of Hell's Kitchen for a period of time, Fisk is betrayed and severely underestimated Owlsley and the reach of his people.  There was a nice cameo from a certain web slinger to boot!  What I love about Daredevil is how real Murdock has always been and how he isn't shy of admitting the struggles he faces day in and day out.  Murdock is a character a lot of people can relate to and look up to, even when he is feeling down.

Star Wars Adventures #25 - I took a short break from this series and based on seeing Princess Leia on the cover decided it was probably a good time to come back. The story follows Leia with one of her oldest friends Amilyn Holdo on a short adventure on Coruscant.  Holdo is learning how to drive and taking Leia on a tour of the shady underbelly of Coruscant where Leia makes a surprising discovery. Tales of friendship like this are something that the Star Wars Universe needs more of. It is nice to see stories that are more run of the mill, while still set in this fantastic environment.  As I note almost every time I write about this series, it is a fun all-ages series that I highly recommend.