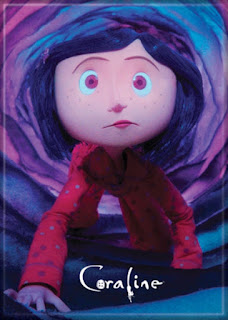 When I saw Coraline in the theater, I thought, “Nope nope nope. This is way too scary for kids.” I loved it, but the movie was legitimately unnerving. Buttons for eyes, sewn-up mouths, dead kids, a spider-lady. But then I heard an interview with Neil Gaiman where he was asked basically the same question — why did you write such a scary thing for kids? His response was wonderful (I mean...Neil Gaiman), and it was that things that are scary to adults are not the same things that are scary to children.

I think about this a lot, and try to take it into account when thinking about what to show my own kids. At the bottom of it all, the way I understand Gaiman’s meaning is that what’s *truly* frightening is the notion that the world ultimately doesn’t make any sense and isn’t governed by any rules that can be understood. As a kid, you’re always finding yourself in trouble or with aggrieved parents for reasons you don’t understand. The great hope is that one day the world will make more sense, and the feeling of careening between invisible, unfair obstacles will lessen.

It's a lovely fantasy. We don’t want to burst their bubble too soon. There is a pervasive mindset that runs throughout much of horror, which is that evil is omnipresent, its application is essentially random, and it is unstoppable. This is a universal feeling and one that older audiences are generally forced to reckon with beyond the confines of movies. One of the great gifts of horror stories to audience members is these tales allow the listener/watcher to confront their very real fears of an impersonal, uncaring, and brutal world in a safe environment. But for kids, the concerns are not yet of that nature. They are personal, dealing largely with one's place in the world. And these fears, too, are more-or-less universal.

The good news is that there are a ton of films that address these fears in a family-friendly way. And by and large, they’re the films you’re probably already familiar with. 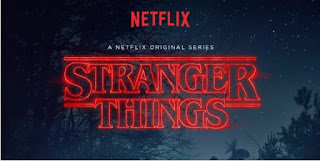 This is probably more of a no-brainer today than I give it credit for. I had some mixed feelings about showing my kid the breakout pop-horror title of our moment, but then I got the, "EVERYBODY at school has seen all three seasons and I'm getting SERIOUS spoilers" treatment, so now we're plowing through.

After Stranger Things, Season 1, I weighed in on this site about what I thought was a bizarre co-opting of...well, pretty much all the other titles I'm going to mention in this series. But here we are, two seasons later, and if kids today don't have time to read/watch every single thing me and the Duffer Brothers read and watched a million years ago, well, who can blame them? If Stranger Things is what steps into the breech, I can think of far worse things.

At some point, everyone feels alone. Everyone feels like an outsider, or an imposter. Everyone feels un-understandable. This makes sense -- we each experience the world discretely from within our own literal shell. We are unique, separate beings, and each of us experiences the world in a singular way. It's scary. When you get right down to it, it's terrifying. It's only through shared experience and through story that we begin to recognize our own experiences in the experiences of others. Many of us are lucky in that we overlap in many ways with those around us, and begin to recognize these shared impressions almost before we are conscious of them. I guess this is what's called "fitting in." But some of us take a long, long time to encounter another or others who make us feel like we're not the first ones to fight these particular battles.

Artists are generally outsiders. Otherwise, we'd all be businesspeople. Growing up, we're often bullied or shunned. The weird kid. The oddball. The quiet one. Like Tim Burton, who famously idolized Vincent Price as a child and struggled to fit in, yet grew up to put a stamp of weirdness across the whole of popular culture that continues to invite other oddballs to feel ok about standing out. As a creator under the ubiquitous Disney umbrella, it's probably easy these days to shrug off Tim Burton. But I don't. This is, after all, the man who directed Ed Wood. He's more than earned his place on my Mount Rushmore.

The first two horror-adjacent films that my kids loved and re-watched again and again at a very young age were The Nightmare Before Christmas and Edward Scissorhands. But there's a funny thing about the movie that is billed as Tim Burton's The Nightmare Before Christmas — Burton neither wrote nor directed it. Henry Selick directed and Caroline Thompson wrote the script. Now, Caroline Thompson's a helluva writer. She also wrote Edward Scissorhands, and The Addams Family, and The Corpse Bride, among many other titles in her 30-year-and-still-going career.

Henry Selick later moved to LAIKA and directed their first feature film, Coraline. You're sensing a pattern, I know. ParaNorman was the studio's second feature film, and is, to me, an indispensable family horror film. There is a lot of very dark thematic material in it, particularly when we learn about Agatha's backstory, but that character, like the rest of the film, is handled so empathetically and with so much care that I never hesitate to recommend the movie. Plus, the zombies are no scarier than Scooby-Doo villains, and are often played for laughs. 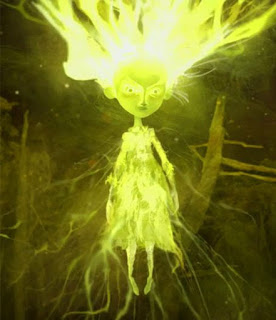 I mentioned how the film treats Agatha with empathy. This is a common thread in so many of these films. Norman himself is an outsider, someone who is misunderstood both at home and at school. Like Edward Scissorhands. Coraline is ignored, and feels invisible. And Jack Skellington is someone who seems cool and the guy everybody else wants to be like...but he feels out-of-place and like something's missing. For kids (and, let's be honest, most adults), these films model a way of existing in the world that resists being governed by the fear of not fitting in, encourages being open and welcoming to others who may be different, and highlights the fundamental human connections that bind us.

These are powerful messages, and they run counter to so, so many of the messages that kids receive on a daily basis.

If we can encourage our own little weirdos to be themselves and support each other, and we can do it with ghosts and spider-ladies, isn't it kind of incumbent on us to do so?

And though I haven't seen them, I have had good friends with kids recommend the more recent:
Goosebumps
The House with a Clock in its Walls

Posted by Vance K — cult film reviewer and co-editor of  Nerds of a Feather since 2012. Emmy-winning producer and director, and lifelong horror geek.
Posted by vkotrla at 12:00:00 AM