The Hugo Initiative: An Introduction

The Hugo Awards are commonly known as “science fiction’s most prestigious award”: a bold claim by the World Science Fiction Society (WSFS) but it is also one which generally holds up. Though the Nebula Awards should map closer to the Academy Awards as a peer given award because the voting body of the Nebulas is the membership of SFWA (Science Fiction and Fantasy Writers of America), it is The Hugo Awards which have the wider notoriety and a slight edge in relative importance. Many readers grew up seeing a small Hugo Award rocket on the front cover of some of their favorite novels and the phrase “Hugo Award Winner” remains a mark of significance, even if that significance for a given reader may change over time. Winners of the Hugo Award are remarked upon outside the bounds of science fiction in fantasy in ways that most other genre awards are not.

One of the reasons we love the Hugo Awards here at Nerds of a Feather is that it is one of the few awards which allows fans to participate in the nomination and voting process in a meaningful way. For the cost of either attending or being a supporting member of the World Science Fiction Convention (Worldcon), it is fans who are the driving force behind the Hugo Awards. It has been that way from the beginning.

Every year we nominate and argue and debate and celebrate all of the wonderful novels, stories, artists, writers, and fans who make the final ballot and then do it again when it is time to vote for the winners. For the last three years we have been honored to be included on that ballot. We are proud to be part of the history of the Hugo Awards, to have our names among those who have made science fiction and fantasy the genre that we so love.

It is with that in mind that we look back at the history of the Hugo Award. 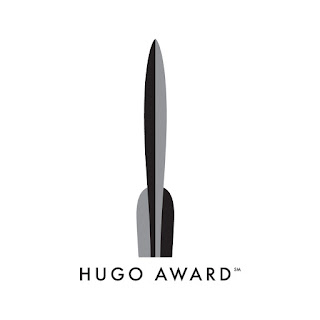 A Bit of History and Perspective

As a fan given award, The Hugo Awards are subject - as everything is - to the combination of relative quality mixed with the vagaries of taste and what is in fashion at the time. It is also an award given by a particular community: those who attend or support a given year's Worldcon. While we value the Hugo Awards as one of the most significant awards for science fiction and fantasy, if not the most significant, we recognize the Hugos exist as part of a wider community and in conversation with that community. So, when L. Ron Hubbard's novel Black Genesis was a finalist for Best Novel in 1987 and it became apparent that it only made the final ballot due to a nominating bloc with the sole purpose of getting that work on the ballot, Hugo voters responded by voting it below No Award.

No Award has been used over the years as a form of protest, as a statement about the worthiness of a particular finalist, as a political response, and as a combination of any or all of the preceding. This is not the time nor the place to recap the Sad and Rabid Puppy years, except to note that Hugo Award voters were quick to surgically vote No Award as a rejection of a political attempt to game the Hugo Awards. Worldcon members then also utilized the multi-year process to amend the WSFS Constitution to make that particular sort of hostile takeover of the Hugo Awards more difficult in the future.

The ability of the community around the Hugo Awards to protect its values and traditions, through the recognition of both "pro" and "fan" achievements across a range of media, has been one of its strengths, but it can also be one of the award's most controversial aspects. There is a tradition of gatekeeping across the history of the Hugo Awards, whether in how particular rules are applied (see Ariela Housman's eligible work in Fan Artist, 2019) or in how new categories are created (see the existence of Fancast, and even how Nonfiction Book changed to Related Work), not to mention how some long time fans respond to particular finalists (see An Archive of Our Own). Less hard to pin down, but perhaps even more influential, are the biases at play at all levels - including in publishing and fan spaces - which lead to the promotion of some works and lack of attention to others. It is these biases which have kept women's presence on the ballot largely confined to a small sample of popular names, while keeping all but a handful people of color and other marginalized creators out of mainstream fandom entirely.

With The Hugo Initiative we do not expect to dive deeply into any particular instance of the Hugo rules, or speculate on what might have been had works by more diverse creators been given equal weight, but we do believe it is worth exploring what we get from engaging with past works through the lens of what a particular community of fans found noteworthy at the time. This is an approach we find valuable, but its far from an objective look at genre as a whole: there are shortcomings in the history of the Hugo Awards, not in the least of which is that the awards have been very white and very male for much of its history.

Science Fiction and Fantasy fandom has often been accused taking the contradictory positions of both spending too much time focusing on only the newest and most exciting works coming out today while being unwilling to look away from the grand masters of yesteryear.

We'd like to follow our love of the Hugo Awards to a middle ground of looking across the decades of Hugo Award winners, with a particular but not exclusive focus on Best Novel. We may discuss works from those Grand Masters, but we will also look at less discussed novels and less discussed authors. We are going to look at the history of the Hugo Award mostly through a cross section of winning novels across the decades, from the earliest Hugo winners in the 1950's all the way into the 2000's.

The Hugo Initiative will be a mix a dossier reviews, roundtable conversations, and retrospective essays. We will examine some of the most significant classics of the genre and consider if they hold up. We will rediscover works that have seemingly been forgotten and discuss whether those novels should be remembered.

File Type: The Hugo Award Category of the work
Executive Summary: Plot summary
Legacy: What is the influence and importance of the work in question?
In Retrospect: An editorial commentary on how good / not good the work is from the vantage point of 2019.

Through the dossier reviews and essays, we look to engage with the history of the Hugo Awards and contrast their importance of some of the winners when they were first published (as best we can figure out) to how they read from the perspective of 2019. It'll be fun. Essays will run weekly on Mondays.

Welcome to The Hugo Initiative.

POSTED BY: Adri is a semi-aquatic migratory mammal most often found in the UK. She has many opinions about SFF books, and is also partial to gaming, baking, interacting with dogs, and Asian-style karaoke. Find her on Twitter at @adrijjy.
Posted by Joe at 12:00:00 AM