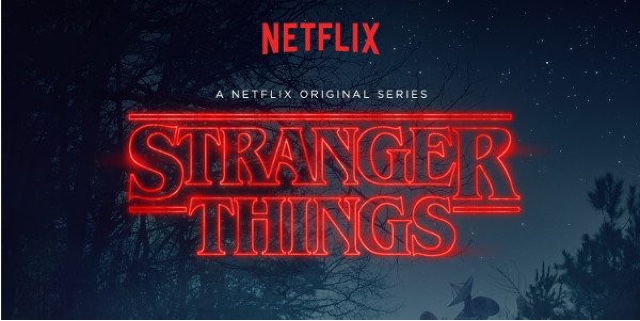 Within two days of Stranger Things appearing on Netflix, I had three separate friends reach out to tell me they'd binge-watched it and I had to see it. That I would love it.

I want to be very clear at the outset and say this isn't a review. I'm not going to say bad things about Stranger Things, and I'm going to try to avoid spoilers. What I'm really interested in is more of a formal analysis.

One of the biggest appeals of Stranger Things is its retro-80s vibe. I mean, just look at this poster! It's amazing. 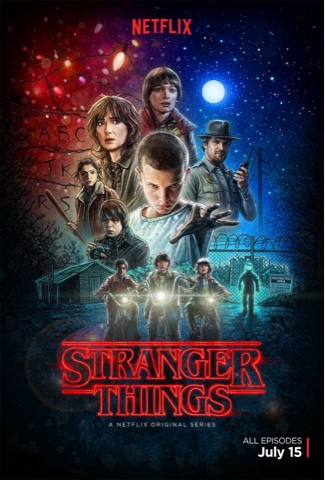 And that font, which looked out at me from the cover of so many Stephen King paperbacks as a kid gives me all kinds of warm fuzzies. By the end of the first episode, I was hooked. But I turned to my wife and said, "If Hopper winds up in the Black Lodge at the end of this thing, I'm going to be pissed."

See, Stranger Things doesn't just have a retro poster and a retro vibe, it actually seems to be made up of Lego bricks taken from 80s and early-90s touchstones. It's really not enough to say that it's "inspired" by E.T., Twin Peaks, Akira, The X-Files, and the music of John Carpenter. It appears to actually be constructed of those things. There are moments lifted directly from E.T., dynamics transposed whole cloth from Twin Peaks, a key character and plotline from Akira, and at one point there was a scene so reminiscent of Stephen King's It that I was able to tell my wife what was going to happen before it played out onscreen.

I love all of those movies and stories. Seeing them all in one place was pretty cool. But I felt an odd pull I've never experienced before — part of me felt that warm, familiar nerd glow of spotting references from beloved hallmarks I grew up with, but I felt a difference between spotting the posters for Evil Dead and The Thing on the walls in characters' rooms, and saying "oh, this scene is from..."

Now here, to me, is the really interesting thing: this is a Netflix show, and with the exception of Akira, every other work I've mentioned here has been available for streaming on Netflix. Netflix was very clear when it launched House of Cards, its first original, scripted show, that its programming decisions were based on user viewing patterns. So it's probably safe to assume that people are watching the hell out of E.T., The X-Files, and Twin Peaks on Netflix. And maybe Netflix's development team said, "Can we get a show that's just all of those things, but a mini-series?"

This could be a one-off thing, or it could be a harbinger of a new phenomenon that is a direct result of the time we're living in. With viewership metrics available on a level like nothing we've ever seen before,  the slow demise of the traditional network television model, and a trend toward limited series, rather than 22-episode-per-season non-serialized dramas or comedies, there is a very real possibility that Stranger Things is something like a new narrative form. The G referred to it in conversation as a bricolage, which may be correct. Or a four-dimensional version of Picasso's early experiments with collage.

I suppose part of me is fighting the urge to be dismissive about a work that in some ways lacks originality, but the fact that I really enjoyed it is telling. I think it will be interesting to see where this goes. I argued in 2013 that Breaking Bad was the signature show of our time not just because of its content and narrative qualities, but because of the way it used streaming services and social media to expand its audience and change viewing patterns. Maybe something similar is happening right now.

Maybe we'll have a Western to look forward to where a Civil War veteran with deep hatred of the Comanche (The Searchers) gets wind of a coming confrontation, and when he can't get anyone in town to stand with him (High Noon), he must confront his racism out of desperation and recruit a team of seven Comanche braves to help him defend the town (Seven Samurai/The Magnificent Seven). Who knows?

Also, I'm available for meetings, if anybody wants to talk about setting up that project...