I think you should actually worry quite a bit, darling

Besides rehashing The Matrix for tradwives, there's very little that this transparent fable has to say about any of its themes 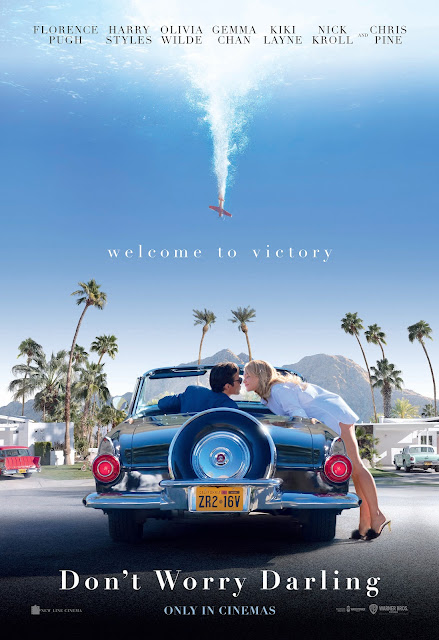 I'm usually careful with what I spoil in a review. This time requires a different approach. Proper analysis of Don't Worry Darling requires spoiling the twist. If that ruins the discussion, that's part of the problem.

Do you see the problem here? We've seen this movie before, done better and with a sharper bite. Yes, we know our grandparents' gender roles were awful. Yes, we know nostalgia is poison. Yes, we know today's masculinity is in crisis, just not the one Jordan Peterson believes is happening. Yes, we know cults of personality never end well. Yes, we know women's liberation is in intensive care until we sort out this three-job economy we've fallen into. Don't Worry Darling resorts to precious, elaborate artistry to make the most obvious points about the clash between 21st-century feminism and 21st-century fascism. After making it through so many recycled bits from a dozen other stories, its only noteworthy reveal is that it has not a single original thought to offer.

Before you come at me screaming that nothing is new and everything is pastiche: I'm not faulting the movie for not having a unique concept; I'm faulting it for not exploring its concept from a unique perspective. What director Olivia Wilde seems to have to say about neoreactionary gurus is exactly what you can read in a Vox explainer, and the movie's stance on enforced domesticity goes no deeper than a Someecards meme.

To sum it up: In an isolated company town made of pastel colors, perfectly mowed lawns and perpetual dinner parties, an entire generation of young couples follow a creepily choreographed routine of the hardworking breadwinner husband and the contented pretty-faced housewife. This is the 1950s not as they happened, but as online manchildren imagine them. Our protagonist, Alice Chambers, gradually follows the clues until she learns that her picture-perfect life is built on staggering cruelty and hypocrisy: the entire town is a digital simulation her husband trapped her in because he felt emasculated in his joblessness and listened to one too many manosphere podcasts.

That's what happens. But what does it mean, beyond what it plainly says? Did Wilde really cast two of the world's biggest male sex icons and hire the cinematographer of Black Swan, an editor from True Detective and the composer of Happy Feet to say what amounts to "There are bad men who do bad things"?

This is a movie about a society ruled by men, but most of the men in the story (apart from the perfectly cast cult leader Frank) don't rise above a plot device function. In particular, discussion about Don't Worry Darling has obsessed over the underdeveloped acting skills of singer Harry Styles. The most charitable explanation for this impression is that the role Styles is playing is not actually Jack the 1950s patriarch, but Jack the 2020s loser who cosplays as a 1950s patriarch. But even under that interpretation, the movie still falls short of its potential. The anxious pursuit of substitute fatherly validation from a tyrannical CEO sparks obvious homoerotic questions the movie doesn't seem aware of. The husbands of the town jump to be noticed by Frank like they're schoolgirls at a Beatles concert. When Jack is promoted at work and Frank awards him a golden ring, the scene is acted and shot like a betrothal.

Unfortunately, any exploration of how patriarchy also traps men would have been too much nuance for this movie. It correctly identifies Jack as the villain who victimized Alice, but it flees in panic from the complexity that would result if it looked more closely at Frank's victimization of Jack. Likewise, we don't learn whether Wilde's character dragged her husband into her fantasy or he is in on the lie. Either answer would open a trail of discussion the movie is not equipped to confront.

You know a story needs reworking when the merely suggested possibilities are more attractive than the events you do get to see. There were many ways the false 1950s town could have been framed as commentary on America's delusions about itself, and the digital simulation is among the least interesting ones. If, for example, the town had been a physical location in the real world, blocked off from modern society, one could interpret the story to allude to conservative America's obsession with exceptionality and fear of openness. Jack's constant warnings to Alice that their idyllic lives could crumble down if she doesn't go along with the script could resonate with the manosphere's accusation that feminist activists ruined the good old days. The bizarre scene where Jack dances under Frank's commands could represent the rat race that corporate power has imposed on ordinary people. There could even have been an opportunity to draw parallels between the town's self-image as a chosen people and the Puritan colonies that gave the country its identity.

But that's not the movie we got. What we got is a skin-deep grasp of metaphor and a parade of confusing hallucinations that don't contribute to telling the story. What we got is a reliably predictable thriller that pretends to not know we've seen all the movies it's imitating. What we got is an accidentally ungrammatical title that creates a fascinating but unexplored ambiguity (without the comma, the "Darling" in Don't Worry Darling could be read in the vocative, as the man telling the woman "You, darling, should not worry," or in the accusative, as the woman being warned "Don't worry him"). What we got is the bare minimum of feminist theory dressed up as if it were a life-changing revelation.