A look back at Ancestry & Culture, an Alternative to Race in 5e

OneD&D still doesn't know how to fix the game's long-standing racism problem, but an independent publisher already offered a solution two years ago 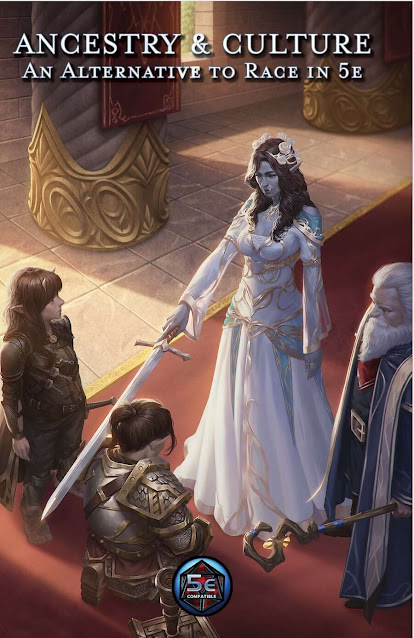 Must all elves know how to shoot bows? Must all dwarves be talented at masonry? Must all halfings have a knack for sneaking where they're not supposed to?

All these are more learned than inherited traits, yet Dungeons & Dragons has consistently failed to acknowledge the difference. It was Tolkien who first popularized the image of elves as ethereal paragons of beauty and orcs as savages basically made of evil, but in the decades since Tolkien, Dungeons & Dragons has reinforced and cemented that bioessentialist paradigm in the popular consciousness.

The current owner of the D&D brand, Wizards of the Coast, has been taking tiny steps toward removing the problematic implications of bioessentialist descriptions of fantasy creatures. Last year, errata files were published that removed default moral alignments from playable characters and some monsters. This change aims to do away with the decades-long trope that certain populations of intelligent beings are innately evil. Of course, attributing one single moral stance to an entire people is not only lazy storytelling, but also an extremely dangerous mindset with real historical consequences. So, for example, sending the heroes to raid an orc encampment just because they're orcs and they must be killed on sight is no longer an acceptable plot point. It's bad enough that Tolkien reinvented orcs as the incarnation of a plethora of Orientalist clichés; we don't need to add on top of it the idea that there's a group of people whom it's always OK to kill.

However, this update to the rules did little to correct the fundamental problem, which is linking behavior to lineage. In the Fifth Edition Player's Handbook, the description of elves still says they "love nature and magic, art and artistry, music and poetry, and the good things of the world," while halflings "are easily moved to pity and hate to see any living thing suffer," and half-orcs "are not evil by nature, but evil does lurk within them." You'd think these behaviors must have a cultural origin, which would make them contingent and malleable, but the manual treats them as fixed elements of their respective heritages.

In a further attempt to separate characters' cultural and biological traits, Wizards of the Coast has recently released playtest material for an overhaul of the Fifth Edition rules. This new project, called OneD&D, consists so far in a revision of the steps for character creation. The proposed update would take into account a character's background in addition to their ancestry (an approach that competitor game Pathfinder has been using since 2019). For example, a character with the Cleric class and the Acolyte background would begin play with different skills and proficiencies compared to another Cleric with the Pilgrim background.

While this system is a move in the right direction, it's definitely not enough, and in some respects it goes backwards. The OneD&D playtest links languages to backgrounds, resulting in absurd assumptions such as all characters with the Farmer background speaking Halfling, or all Hermits speaking Sylvan. It still carries heavy bioessentialist baggage to designate Draconic as the language of nobility or Goblin as the language of warfare. And the core ancestries of the game keep much of the original problem: dwarves are still assumed to be trained in forge tools (presumably from birth), gnomes instinctively know how to magically create a tiny machine, and halflings are born with Stealth proficiency. And when it comes to characters of mixed heritage, the suggested mechanics make no sense, and the text reaches a degree of exoticization you'd expect from a 1980s game.

D&D has a lot of catching up to do. Strangely, it still uses the term "race" to refer to Tolkien's canonical humanoid species. Replacing "race" with literally any other descriptor should be the very first step to keep D&D relevant to future generations of players, and the immediate next step should be to pay attention to the inexcusable missteps that keep occurring and keep damaging the good faith the game has cultivated.

This discussion is by no means new, and fans have been thinking of alternatives faster than Wizards of the Coast can make up its mind. In 2020, independent publisher Arcanist Press saw the problem with D&D "races" and launched an unofficial supplement: Ancestry & Culture, which contains a clearer, more practical set of rules for character creation. The approach is, in a nutshell, what it says in the book's title: each character is born from a certain lineage and is raised in a certain culture, and the two can be freely chosen in any combination. Biological traits are limited to lifespan, size, speed, senses, monstrous body parts, and when aplicable, physical resistance to damage. Cultural traits refer to everything that comes from education and training: languages, weapon proficiencies, ability score increases, and starting cantrips. So, if you want, you can have an elf raised by tieflings, a dragonborn raised by humans, an orc raised by gnomes, and so on. Notably (and rightly), alignment is neither an inherited nor a learned trait. Alignment is a strictly individual matter, unrelated to whichever society your character comes from.

Furthermore, Ancestry & Culture contains remarkably sensible (and sensitive) rules for creating characters born with mixed lineage and/or raised in a multicultural environment. If you've ever wanted to roleplay the child of a halfling and an orc who grew up near a dwarf-gnome border, this supplement is exactly what you need. For an even more granular method of character creation, there's an appendix for you to build your own combination of cultural traits. As unofficial material, it only includes the ancestries enumerated in the Open Gaming License, but, anticipating the players' understandable wish to adapt other ancestries to this system, the author explains how to generalize the application of these principles.

The standard of quality of this supplement received the highest endorsement when it won two ENNIE awards: Best Electronic Book and Best Supplement, in addition to a nomination for Product of the Year. Since the publication of Ancestry & Culture, Arcanist Press has gone on to launch half a dozen other similar rulesets, with a total of over a hundred alternative ancestries to choose from. As a final treat, Ancestry & Culture includes two playable adventures, one centered on protecting a multicultural city, and one about convincing various peoples to cooperate.

So we don't need to wait for Wizards of the Coast to learn its lesson. We're living in the middle of an explosion of creativity in the roleplaying community, and it's evident that players and independent creators have moved on from the outdated mindset the game was created with.

Bonuses: +1 for beautiful character illustrations that show precisely how the various combinations of bloodline and upbringing can produce wonderfully unique stories.