Space Nazis set loose a plague of zombies and well-worn tropes in this epic military sci-fi. 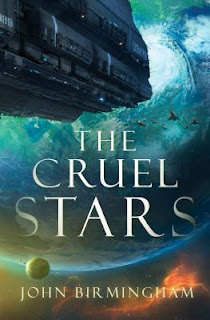 Tomorrow marks the start of Conflux, Canberra’s convention for speculative fiction writers. For 2022 it is doing double duty as the Australian national speculative fiction convention. It has become my tradition to review something by a Guest of Honour wherever possible. This year that’s John Birmingham.

The Cruel Stars is the first in an anticipated trilogy of military sci-fi. It follows the perspectives of five survivors of an attack by the Sturm. The Sturm are explicitly described as space Nazis, obsessed with keeping humanity pure of the neural nets and other in-body technology that has become so pervasive. Having been defeated once many years ago, they return following a necrophagic virus they’ve engineered to turn anyone with implants into zombies, wiping out most of civilisation. It’s up to our survivors to defeat them once again.

While The Cruel Stars is a solid read, it’s not exactly breaking new ground. Rather, it weaves together a bunch of well-worn sci-fi elements into a complex pattern. Most people live several lifetimes, downloading their consciousness into new bodies when their current ones wear out. Skills are frequently downloaded rather than learned, like in the Matrix.

Lucinda Hardy is the commander of the only surviving warship in the Royal Armadalen Navy and a warrior who has worked hard to acquire her abilities in combat. Her scenes are the most traditionally military sci-fi, reminiscent of Battlestar Galactica and, later, anything with space marines. Having grown up in poverty, she feels out of place among the officers on her ship. Her Imposter Syndrome and the class issues her story touches upon give her some interesting dimensions, but not much time and space are devoted to exploring these issues in depth due to the sheer number of elements in play.

The characters of Sephina L’trel and Booker3 lean into different aspects of cyberpunk. Sephina is the head of an outlaw band who are in the middle of a gunfight when the virus takes hold around them. These characters play more into the sassy, criminal, Japanese-influenced aspects of cyberpunk. In contrast, Booker3 is on death row for his heretical belief that the soul is code that can be transferred between bodies and machines. He has much more of a Ghost in the Shell vibe, with faint echoes of Murderbot. Some of the forms into which he is downloaded prove rather amusing.

A very young princess of a corporation and a very crusty retired admiral round out the point-of-view characters, along with the admiral of the Sturm. The number of POV characters with their very different situations gives a good sense of the epic scale of the attack. However, cycling through all the different storylines makes the pace slow, at least until they begin to converge.

I am not a big fan of zombie stories (with a few notable exceptions), but found their use in The Cruel Stars drew me in. After the initial, very gruesome shock of them, the zombie presence in the story remained relatively light, mostly remaining as an obstacle to the use of technology so prevalent in this world.

The cast is reasonably diverse, but not without problems. Using a character’s phenotype as a shortcut description seems a curious choice in a book about space Nazis — even if those space Nazis are less concerned with race than technology. Also, did we really need to fridge the gays?

Disability continues to be a weak point of the cyberpunk genre. It seems assumed that disabilities have been largely engineered away, except in the case of Admiral McLennan, whose refusal to have a predisposition to cancer engineered away and whose reluctance to relife has him facing disaster in 54-year-old body — traits which are framed more as eccentricities than solid representation of disability.

It managed to weave in some distinctly Australasian elements, which I appreciated. These elements mostly tied into the setting. This is a far-future story, but still based in our world. The Royal Armadalen Navy that Lucinda serves is the military arm of the Commonwealth of Armadale. For context, Armadale is a suburb in the city of Perth in Western Australia which originally started life as a small colonial garrison. Lucinda is also mentioned as earning the Star of Valour in the Javan War. One of the most powerful corporations-cum-noble-houses is the Yulin-Irrawaddy Combine (though, as they are also one of the least ethical and most ruthless, perhaps not the most well-considered inclusion) and a number of characters are described as having South-east Asian phenotypes.

The writing style was noticeably clunky early on and particularly in the first chapter. I found this surprising from someone I would have considered a reasonably experienced writer. Fortunately, it improved as the book went on, finding its strength more in action sequences and big moments.

That said, I did find the ending somewhat unsatisfying, with a deus ex machina that was more literal than most.

All in all, The Cruel Stars didn’t blow me away, but may appeal to more devoted readers of epic science fiction.