Last Car to Annwn Station takes what is now a famous trope in Urban Fantasy --the presence of Faerie in the Twin Cities, and puts his own, Welsh mythological spin. Oh, and Streetcars. 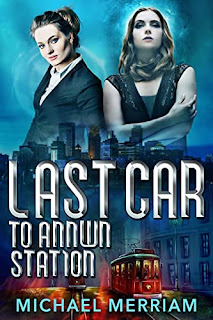 Child Protective Services Attorney Maeve Malveaux has a problem. She is convinced that Chrysandra Arneson, yes of *that* Arneson family, is being abused, and needs to be rescued from her rich and powerful family. It’s bad enough that she is an attorney fighting powerful interest. However, when she stumbles into the fact that there is a conspiracy of mages involved, and that both she and her would-be new girlfriend Jill are tied to the Fae, well things have gotten even weirder and harder to save a little girl, who may not be what she appears, either.

This is the story of Michael Merriam’s Last Car to Annwn Station, recently re-edited and published by Queen of Swords Press.

As I said in the opening, Faerie in Minneapolis has been a thing ever since Emma Bull introduced the Faerie to Minneapolis with War for the Oaks, and permanently highlighted the Twin Cities as a hotbed of Faerie activity for games like Changeling the Dreaming, and other stories and novels taking up the cause.  A modest but not overwhelming city on the edge of Prairie and forest,plenty of lakes, a vibrant cultural scene that punches above its weight, and much more make the Twin Cities a logical place to set stories like this.

So what do we have here with Merriam’s story, then and what is new and what makes this story stand apart? Merriam is of the classic school of intersecting a couple of different ideas and seeing where that lies.  One of those ideas is something I’ve only been vaguely aware of, and now need to know and explore more about, and that is the streetcars of Minneapolis. Once upon a time, Minneapolis was a streetcar town, before it became a car town (a sadly not unique story to Minneapolis).  And while I was vaguely aware of the existence of the Minneapolis Streetcar Museum, which celebrates this heritage and even has a short ride possible on a couple of working streetcars, I have somehow not done this¹ Merriam takes the old Streetcar system and posits ghostly streetcars still running in the city, if one has the sight and power to see them.

And this is one of Merriam’s inciting incidents. Mae suddenly can see the ghostly streetcars that run in Minneapolis, boards one, and so enters the faerie portion of the story. A cast of characters are on the streetcars, including Merriam’s take on the personification of Death. How and why she was suddenly able to see the Ghostly Streetcars, well unraveling that is part of the story. The Streetcars do drive her to learn about the magical and faerie connections

And about those Faerie connections. The other major innovation that Merriam brings to the Urban Fantasy Faerie in Minneapolis trope is that instead of a more traditional Faerie or even generic by the numbers “Celtic fantasy court” is that Merriam goes deep into Welsh Mythology, legend and lore. You might not have known, but I picked up from the title right away with “Annwn” (the Welsh land of the dead). Merriam goes for the “diminishment” approach to how the faerie of the Welsh otherworld are faring in light of the forces arrayed against them, and that is where Mae, and Jill wind up coming into the plots.

Being that this is Welsh Mythology and Annwn features prominently in the plot, and the fact that Mae gets involved in the first place thanks to being a Child Protective Services Attorney, I should warn you that while the majority of this is a pretty fun and entertaining urban fantasy (Mae and Jill trying to figure out their relationship, the characters on the streetcars, the mise-en-scene of Minneapolis), the novel does go to some dark places. This is in keeping with the Welsh Mythology I’ve read, which does have these elements built into the mythos. So, the use of Welsh Mythology leans into those themes.  It’s a quite effective look at what and where the Welsh otherworld might be in these modern times. But content warnings for endangerment of children, talk of suicide, and other dark themes definitely should be kept in mind for readers.

Further, though, I found that the work was quite queer friendly, Jill and Mae’s relationship is accepted by all and sundry without question.  Both Mae and Jill wind up becoming heroes, and saving each other in turn as they grow and change. There are costs to this of course (c.f. Welsh Mythology) and I really enjoyed the arcs both of them get in the novel. I entirely enjoyed and rooted for their tentative, growing relationship throughout the course of the story.

Finally, I have not talked about the framing of the novel, and it is difficult for me to do so without revealing a lot of plot spoilers. I found the framing of the novel and who and why and how they are doing it (really, they are the third main character) to be thematic, clever and a good use of a frame to hold the story together. It’s also very plot relevant in the end how Merriam crafts the story, on a skill level as well as emotional beats, as mentioned above.

And I think I need to visit a certain running streetcar soon, now.

Bonuses: +1 for strong and interesting worldbuilding fusing the history of Streetcars with Welsh Mythology in Minneapolis

Penalties: -1 Some of the denouement in the end feels extremely rushed and could have been an entire sequel in and of itself, and a fascinating one at that.