The Wheel of Time Reread: The Shadow Rising

Welcome back, dear readers, to The Wheel of Time Reread. Today we’re going to talk about The Shadow Rising, the novel I’ve long considered to be my favorite in the series. The Wheel of Time is what could be affectionately (or derisively) called Big Fat Fantasy.

I first discovered The Wheel of Time somewhen between the publications of The Shadow Rising and the next book, The Fires of Heaven. I have strong memories of the Rush City Public Library, browsing the shelves, finding new epic fantasies to read, the comfort of Darrel K. Sweet’s cover art, going through a really primitive semi-online catalog to find and request new books that I was so excited to read.

They say that the Golden Age of Science Fiction is twelve, and that feels right because even now when science fiction and fantasy has permeated the “culture”, it’s the age of discovery for kids who start to have more agency in choosing exactly what they want to read and diving into all the things on their own. That would be a much larger conversation to refine that idea and it’s one that many other people have had - so we should go back to The Wheel of Time. 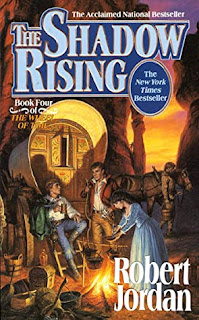 The larger point here is that I was thirteen when The Shadow Rising was published and was either thirteen or fourteen when I started mainlining this series. The fact that The Shadow Rising is the longest book in The Wheel of Time was just gravy for me at the time. But, how does it hold up?

Well, let’s take a look at the map and the spot marked Here Be Spoilers, and find out.

If you reduce The Shadow Rising to the biggest and most significant moments it’s easy to gloss over just how long the opening of the novel feels. This seems to be a trend with the series, that after “The Wheel of Time turns and Ages come and pass” and after the wind blows and it isn’t the beginning but “a beginning” Robert Jordan eases us back into the novel at a very leisurely pace.

It just so happens that I *like* spending time in this world - as much as the waiting periods can be a couple hundred pages of frustrating, though it’s interesting that the characters are also equally (if not moreso) frustrated about being stuck in Tear because Rand won’t say what he’s going to do. Narratively, it (mostly) works because it builds the particular concerns that Moiraine needs Rand to be moving towards the Last Battle and fulfilling what he needs to (and specifically, what *she* thinks he needs to) as well as the Black Ajah hunting that Egwene / Nynaeve / Elayne need to do and Mat’s need to be *somewhere* else and Perrin’s desire for the stability of not following Rand. Once there is a further Trolloc attack inside Tear, Jordan begins to move the pieces on the board and once the group splits - the story really kicks into the gear it needs to.

I considered ending this essay with my favorite part of the novel, but why bury that lede? Possibly one of my favorite aspects of the entire series, which I clearly love otherwise I wouldn’t spend so many words on it, is the time Rand spends at Rhuidean. There are these magical rings that Rand has to walk through, the same rings that the Wise Ones and the Clan Chiefs of the Aiel must walk through to be given glimpses of the past, of the truth of who the Aiel were and how they became who they are now. It is those glimpses that show us the Age of Legends and moments leading up to the Breaking of the World and the aftermath, of how the Aiel were tasked to save so much knowledge and so many artifacts but how much of that was lost in the generations upon generations upon generations. And how the fierce warrior culture of the Aiel we know is so far from the sworn to peace Aiel that served the Aes Sedai. 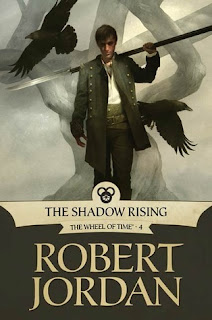 The Shadow Rising is packed with a lot more than I remember, even in the thirteen years since I’ve last read this book. I didn’t remember that THIS is the book where Nynaeve fights and defeats Moghedien, one of the Forsaken. That’s a Crowning Moment of Awesomeness. This is also the book where Rand meets / fights Asmodean, which is going to work out for him because the only person who can help Rand learn to control his power is another man and those are few and far between, so Rand gets his pet-Forsaken. Perrin becomes a “Lord” of the Two Rivers. Not really, but kind of really and truly. It’s a weird sub-plot but it sort of makes sense in a hand-wavy Ta’veren sort of way. A lot of these books can get waved away with a mutter of “ta’veren” and just accept it.

The battle for / rebellion of The White Tower is in The Shadow Rising and that’s really something I thought was in the next book. I both can’t wait for that scene in the show and dread it because the stilling of Siuan Sanche and Leane is just brutal and wrongheaded (though that it eventually leads to the quiet rebellion of Egwene in the Tower, which is another of my favorite bits is an ultimate mark in its favor) - but having The White Tower ineffectively led at best and under the control of the Black Ajah at best is just really a damn shame for the world. I just didn’t realize that was *this* book.

Here are some random final notes I took while I was reading. :

*The visit to Rhuidean is still absolutely thrilling. I love learning the history of the Aiel. I want more of this even if I don’t think I want an actual prequel novel or even novella. I just want more glimpses of the Age of Legends and how the Aiel became the Aiel. How the Tinkers were an early splinter off the Aiel, still following the Way of the Leaf but following a path trying to find the song (or songs) they were known for as Aiel serving the Aes Sedai. Then the warrior Aiel we know were a later splinter off to protect themselves while the Jenn Aiel continued to follow the Way of the Leaf AND who stayed true to their original mission of protecting the artifacts from the Aes Sedai and to find a home where they could be safe. How hard it is for Aiel to accept this (which is why only those chosen to lead are allowed to learn of this, to see and live that history through the ter’angreal rings at Rhuidean).

*I think I just appreciate the time spent in the Waste, in the Three-Fold Land, with Egwene learning.

*Mat and his spear and his trips through the ter’angreal doorways. Snakes and Foxes.

*Nynaeve and Elayne on a Sea Folk ship - the customs and learning that the Windfinders can channel.

*Ordeith means to scour the Two Rivers (as he did with Perrin's family farm and all his family) - obvious reference to the Scouring of the Shire.

*I don't remember being a big fan of the Perrin / Faile / Two Rivers plotline, but it is a nice anchor and reminder that all of this war (waves hands) has an impact on regular people and not just lords and prophesied heroes and magicians and dragons reborn. RJ is, overall, very good at that even when those common dead are unnamed and just burned out villages.

*At the Two Rivers there is a proper introduction to Alanna - she who will hold Lan's Warder Bond when Moiraine disappears.

*A little bit of background on the Tower of Ghenji and a glimpse of Birgitte and Gadal Cain, though neither are named. More on this MUCH later.

*I also don't remember how much Verin is acting against the Light up until she is discovered much later. 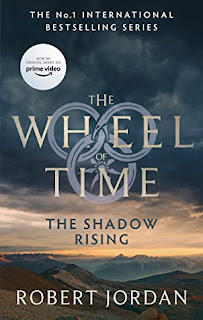 *Part of the game Faile plays with Perrin is super annoying - but remember Perrin and Faile are all of 20 years old and it's more of a kids game of relationships, but it's a pain to read.

*Verin recoginizing that Perrin's growing authority is very quickly going to change the nature of the Two Rivers - and also that he is ta'verening all over the place.

*The raw hate of Couladin and the Shaido Aiel

*Twice and twice he shall be marked.

*The idea that the ancestors of Cairhain let the Aiel have water three thousand years ago, which led to the friendship between the Aiel and Cairhain later, which led to the Avendesora cutting as a pledge of friendship, Laman cutting it down, the Aiel War and all of that leading to Rand being born during that war and carried off to the Two Rivers. Each step that needed to be taken to bring to where he would be,.

*Rand's insistence that he has to carry the load. Duty is heavier than a mountain.

"You knew my mother," he said. Egwene leaned forward as intent as he, and Mat shook his head.

Amys's hand paused on his face. "I knew her"

"Tell me about her. Please"

*Jain Nateal - a gleeman in the Waste (later revealed to be Asmodean) notes “Aiel? Not what I would have expected. I can still hardly credit it” which reads at first as a man who had never met the Aiel before but when you know that he is Asmodean you realize that he knows what the Aiel were during the Age of Legends and before the breaking. What Rand got glimpses of, Asmodean lived.

*Male A’dam - given to Bayle Domon to dump in the deepest part of the sea. Probably not going to end up well.

Luc is the brother of Tigraine - the Daughter-Heir of Andor who disappeared to become Far Dareis Mai and eventually Rand’s birth mother. Luc eventually disappeared into The Blight.

Isam, which is also the word the trollocs were chanting, is cousin of Lan and is of the Malkieri royal family. They are some sort of an amalgamation where both exist in the same body and can change forms? I don’t fully understand and I don’t think we get a lot of answers until late in the series. But collectively, they are Slayer.

Next up, The Fires of Heaven, in which things happen (probably). Plus: the power of balefire, more battles with the Forsaken, Rand takes over another city, and Robert Jordan’s adaptation of Gandalf and the Balrog.

Joe Sherry - Co-editor of Nerds of a Feather, Hugo Award Winner. Minnesotan. He / Him