In Needle, Linda Nagata continues the story of Clemantine, Urban, Vytet, and the rest of the crew of The Dragon, as their inward quest to discover what has happened to the core systems of humanity leads them to perilous encounters in the star system of Tanjiri. 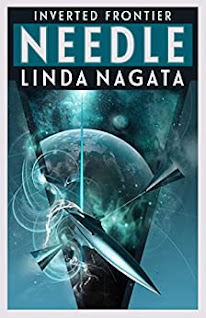 When last we left the crew of Dragon, they had escaped the very dangerous nanotech infused world of Verilotus (as detailed in the first and second book in the series, Edges, and Silver) and the entities they encountered there. They escaped the peril of that world (formerly seen in the novel Memory) and continued on their decades long quest toward the Hallowed Vasties, the former beating heart of humanity among the stars. Now, as decades pass and they reach their next target, the solar system Tanjiri, the question of what lies in this solar system is twisted and entwined with another: how to open and use the indecipherable titular Needle they obtained at Verilotus. The Needle, if accessed and used, could make and sculpt whole worlds and star systems...or destroy them. And much more. All the knowledge of the God like entity known as Lezuri is contained with it...if it could but be opened.
This is the story of Needle, the third Inverted Frontier novel from Linda Nagata.

If Edges was the story of a Call to Adventure and running right into a cliffhanger resolved in Silver, and confronting ancient nanotech and a god like figure, Needle by comparison is very much a novel of re-contact and the divergence of humanity, and what they brought with them, or didn’t, on their journeys. The non FTL pace of Nagata’s verse here means that it is years, decades between systems, and between novels, and significant time (months bordering on years) happens in the space within novels.

The Tanjiri system is the closest to the explorers of Dragon (and their small flotilla of other ships) as they continue to explore and discover the world of Nagata’s grand concept--the concept of an inverted frontier (hence the series name). This is a brilliant idea (that the folks at Stellaris should scoop up and put in as a DLC as soon as possible). The adventurers from, Deception Well and elsewhere(Urban being the prime mover of the expedition with his captured alien ship) started on the frontiers, the edges of where humanity had expanded to, and the novels are the rediscovery of what lies in the ruins and remnants in the core systems, the dangers, possibilities, and wonders within. What HAS happened to the decaying megastructures and amazing feats of construction, engineering and more in the “Hallowed Vasties”, the core systems of humanity who rose to building ringworlds and dyson sphere like objects...but now are radio silent and their structures (at least from telescopes) falling apart? What does it mean to explore the ruins of the past of one’s own ancestors and find those huddling (or hopefully more than huddling) within?

Imagine a group of adventurers from Britain in the 7th century AD, traveling to find out what has happened to Rome, with all the perils, dangers and more along that road to Rome. Or imagine, more science fictionally, if a comet wiped out the east and west coast of the US in 1880, and decades later, a group from Tulsa Oklahoma journey toward one of the coasts to find out what really happened and what remained. In each case, what was once the “frontier” is now where civilization still stands--but what has happened at the core, and what remains? Or Gustave Doré’s The New Zealander (1872), which depicts a ruined London and a visitor from New Zealand sketching the ruins. 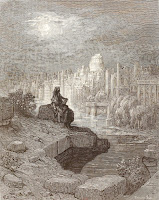 The Inverted Frontier novels are a nanotech infused non-FTL space opera version of this core concept. This does lead to a style and direction that is much less frenetic than the solar system space opera of The Expanse, or the FTL verses of Gareth Powerll and Adrian Tchaikovsky. These novels, this world are much more measured pace in their approach, and much more of consensus (and breaking that consensus) approach to problems and opportunities in their adventures. The crew of the Dragon and the outrider ships (which are often versions of the crew) are much more Picard era The Next Generation (or more contemporarily, Pike era Enterprise) than, say, the original series Star Trek. Yes, they have secrets, concerns, and do things without permission, but there is a lot of debate and discussion, playing into the time scales that the novel is dealing with.

One of those discussions and a major factor in the book, is the creation, out of one of the main characters, an artificial personality named The Cryptologist, to investigate the aforementioned Needle. The creation, nature and the evolution of the Cryptologist brings together a lot of what makes Nagata’s writing work at it in its best--the speculation and far future nanotech and high technology needed to make her not just a ghost in the machine, but later (on her own initiative) get unsubstantiated into a body. It allows us to explore the ethics and considerations of having multiple versions of yourself, sometimes quite different than yourself, running around in one form or another. That last is already present as a feature of the verse, as Urban has several apparatchiks helping to run Dragon and its systems (and given the alien nature of the ship, he certainly needs them) but seeing the consequences of building one from the ground up, and the perils and promise of doing so, and the social considerations of doing so, are fascinating. Consider that the Cryptologist was made for a specific task. How does one navigate creating an artificial being that is designed to do (how difficult a thing)? And what happens when that being uses methods and procedures and avenues you did not intend, or want? What happens when the Cryptologist *grows*?

Nagata further enhances this unique new member of the crew developing and growing throughout the story with the story of Jolly. Jolly chose to join Dragon at the end of the Edges/Silver duology and is committed to the spirit and promise of exploration. He is much less experienced and younger than Urban and Clemantine, and thus provides an entry point of wonder and youth to the proceedings. It is no surprise, given the Cryptologist’s newness, that their stories intertwine. Their two stories sit front and center, giving sharp relief to the more experienced Urban, Clementine and Vytet.

Even as this social dynamic plays out (in some surprising ways as the plot goes on), the main action of the plot grabs the readers attention. At Tanjiri, Dragon encounters two very different human societies, one in the ruins of a megastructure with the most precarious of existences, and one seemingly in plenty and free from want--but yet near to but never touching the mysteriously lush planet and moon right next door. Nagata explores a lot with these two cultures--the nature of memory and remembering past wrongs (or not remembering them), how to build societies to external social and physical strictures, and what happens when those deprived are finally given power long denied them. All of this, combined with the mystery of what really is going on in this system, that Lezuri warned Urban about, provides the meat of the crackerjack plotting. I relished the landscapes, technology and the cultures of the societies that Dragon interacts with. And to go all Star Trek again, how the Dragon’s visit irrevocably alters and changes both of these cultures, especially since it is not intended. The road to hell is indeed paved with good intentions, as The Dragon’s crew learns in this novel.

I had been a fan of the Nanotech Succession novels back in the day, and once again, I am very delighted by the return to that verse, centuries hence, in the Inverted Frontier novels. This book, unlike Edges and Silver, is a single standalone. Given how rich this novel is and how much it relies on the reaction to the events in those first two novels. I would not counsel starting here--since as much as Nagata packs in ties and grounding to the past, there is a LOT going on in this verse, even within the relatively limited world of Dragon and where it visits. So if you are interested in adventure in a far future high tech world, I commend you to start with Edges and come to here through that and Silver. (and then if you like, catch up with the earlier novels, particularly Memory, which will resonate directly with Silver). The Inverted Frontier novels continue to be some of my favorite space opera.

Bonuses: +1 for a strongly interesting new setting and set of problems for the crew of Dragon to explore

+1 for interesting ethics and ideas explored throughout

Penalties: -1 at this point, the novels no longer stand alone.