Nanoreviews: The Genesis of Misery, Even Though I Knew The End 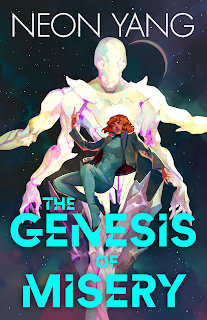 The Genesis of Misery by Neon Yang (Tor Books)

As a huge fan of Neon Yang’s Tensorate novellas, I’ve been very eagerly awaiting this first novel from them and The Genesis of Misery does not disappoint, pulling together a whole bunch of worldbuilding elements that combine seamlessly into an outstanding action-y space read. There’s the Catholic religious vibes (the one liner for the novel is “Joan of Arc in space”); the ritualistic, authoritarian trappings of empire around that which call to mind Yoon Ha Lee’s Hexarchate or Ann Leckie’s Imperial Radch; and the giant sacred space robots and the battles between the Empire’s space robots and the forces of the rebel Heretics – smaller in number but able to engage in more novel formations thanks to said heresy. Add to that the plucky squad of variously damaged folks brought together around the promise of a bold new strategy – with a special shout-out to the haughty but hot space princess, initially out for her own political gain, forced to undergo a crash course in humility – and then, into the middle of it all, throw one (1) absolute mess of a human called Misery Nomaki. It’s a lot, but we’re in very safe hands with Yang’s storytelling, and the combination of Misery’s narrative voice and the regular interludes by a third party narrator make for a powerful prose combo.

There’s a lot of things I could pull out to talk about (and would, if this were a full length review), but what I love most about The Genesis of Misery is Misery themself. Misery’s journey has a lot of familiar storytelling beats, and yet the setting and their choices combine to make something that feels quite fresh, from the moment we meet them, on the run and apparently suffering from beginning of the same illness (voidmadness, aka another fantastic concept) which killed their mother, to their co-optation by elites within the empire who compel them to play the part of a prophet even when they are convinced they are a fraud, to the actual awakening of their powers and the impact this has on their religious beliefs and their role within the system that’s trying to use them. (As a side note, Misery uses she/they pronouns, with the book sticking mostly to having Misery call themself “she” in narration and everyone else use “they”. This definitely isn’t how all non binary folk use multiple pronouns, but it’s the first time I’ve seen a character depicted using more than one pronoun by choice at all, and that’s a long overdue thing). Misery’s journey in this first book of a trilogy doesn’t end up where I expected it to from the tropes at play here, but that makes me even more intrigued about what comes next, and I’m excited to see more of this world. 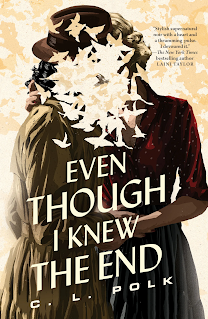 Even Though I Knew The End by C.L. Polk (Tor dot com Publishing)

Polk’s first published novella is a bittersweet gem of a noir fantasy romance. Set in the Chicago of the 1930s, in an urban fantasy setting where magic and demons exist alongside the more mundane monstrosities of human society, Even Though I Knew the End is the story of Helen, a jaded detective and former medium who gets pulled in for one last job, pushing herself through by thinking of the time she’ll get to spend with her lover afterwards. Helen knows this is her last job because ten years ago she sold her soul to a demon, in an exchange that felt worthwhile at the time, but now she only has three days left until her debt comes due. But her employer dangles a tantalising promise before her: use her three remaining days to catch the White City Vampire, a vicious serial killer, and her soul can be returned to her along with a tidy reward, letting her retire for real and live out the rest of her days with her darling Edith.

Like many good urban fantasies (historical or otherwise), Even When I Knew The End works because it blends its supernatural elements so effectively with the day to day business of being human. In Helen and Edith’s case, that means being queer women in love and living as part of a marginalised but quietly flourishing queer community, and Helen specifically deals with the disapproval and estrangement from her magical brother, who is still part of the Brotherhood which kicked her out when she lost her soul. Noir doesn’t need any supernatural elements to deliver the genre’s brand of horror, and while this story introduces us to angels and demons with plenty of convoluted, impenetrable motives, it also grounds Helen’s core decision – the choice to sell her soul, even knowing what it would mean for her a decade down the line – in an incident with such a mundane sense of tragedy and unfairness that it sets the whole story spinning around a real, recognisable emotional core. As to the ending, Even Though I Knew The End gives us a genre-compliant romance ending that nevertheless hits some of the most bittersweet notes of the whole narrative. It’s painful, beautiful and very fitting, and it caps off a novella that’s well worth checking out.