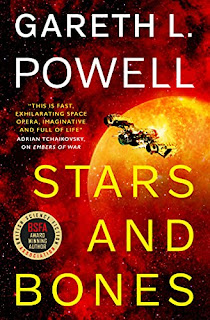 A Deus Ex Machina is a person or thing (as in fiction or drama) that appears or is introduced suddenly and unexpectedly and provides a contrived solution to an apparently insoluble difficulty. In Gareth Powell’s Stars and Bones: A Continuance Novel, the Deus Ex Machina is in the prologue and sets up our verse for the rest of the novel.

After an god like alien intervention stops what would be a civilization-ending nuclear war, the price of that intervention is humanity’s exile from Earth and any other such world. Humanity now lives on a series of great arks, comfortable, well supplied, but on an eternal wandering among the stars. Man is still a curious species, though, and does have scout ships and the like to look at planets and other things, so long as they don’t try to land and settle. But on planet Candidate 623, a Borg-like threat that could wipe out or consume humanity entirely emerges, and it may take yet another Deus Ex Machina from the “Angels”  to solve and save the problem. As it so happens, the  person best able to possibly contact the aliens who saved humanity the last time is in an undisclosed location. And the entity, the power on Candidate 623 is looking for him, too...

This is the world of Gareth Powell’s Stars and Bones.

If Powell’s Embers of War series, his previous series was straight up far future Big Dumb Object Space Opera, The Continuance is much more closely tied to our own place and time, a Humanity that has been saved at the cost of having its wings clipped. They are only a couple of generations into that voyage, however, which makes the knitting of the early thread where we learn the details of Humanity’s salvation, and the main narrative following the dangerous threat on Candidate 623. Powell’s main POV is Eryn but he knows when to change the POV to one of the past ones, or a different view of the current situation. There is a good balance here and it helps show off Powell’s verse.

What the novel felt like in terms of overall tone was a dialogue and discussion, and a love letter and a riff on many other novels of this type, but framed in Powell’s style and diction. There are elements and allusions to the work of Peter F Hamilton (with whom Powell has collaborated), Larry Niven, the movie Wall-E, Star Trek, Star Wars, Tanya Huff, Alasdair Reynolds, Melinda Snodgrass, Adrian Tchaikovsky, Cordwainer Smith, and likely other influences and references that I missed entirely. This is a novel that  was written by someone who loves Space Opera, loves what his fellow writers do in a Space Opera environment, and puts his work squarely in dialogue and resonance with many of them.

So what else is here besides those resonances?  Plenty. There is a style, a feel to Powell’s work that is well represented here, and that is in the theater of character. While Powell may riff on some of his worldbuilding on bits from other and classic works of SF, it is in the realm of his characters that he turns the full powers of his invention on the characters he creates and their relationships between them that bring the novel to life.

Stars and Bones has a wide and varied cast, but it is really at its heart the story of Eryn. Eryn has grown up in the fleet, has know the world of the migrating arks for all of her life. The fate of her sister, being one of the people who disappeared and presumably was continued on Candidate 623, propels her into the plot and connects with the other characters who wind up standing against the threat (as it slowly becomes known, and as it slowly becomes an ever greater problem for Humanity.

The real standout characters, besides Eryn, I found, were the non-human ones. Readers of the Embers of Wars series knows that Powell likes to use AI as characters, and this novel is no exception. In addition to providing the arks themselves, the arks create physical avatars, humanoid (usually) interacting entities that members of a particular ark can communicate with. These avatars range from the scout ship Furious Ocelot all the way up to the huge ships like Great Barrier Reef. These avatars have distinct and sometimes sharp personalities, and also can show the possibility of change and adaptation, especially once the enemy starts infiltrating and attacking the arks themselves. In particular, the bond between Eryn and the Furious Ocelot avatar is a strong and well developed relationship that is a real highlight of the novel.

Although they are literally a Deus ex Machina, I also found the angels (as they are called) vast intelligences and beings that nonetheless Powell brings into relief. Raijin, the Angel that Eryn eventually seeks to meet in order to combat the threat from Candidate 623 (and indeed, is the Angel that saved the Earth and meted its judgment) is literally quite like a god in comparison to humanity and why and how what he does is above the comprehension of the characters, Powell has a good hold on him as a character. It’s tricky to have superhuman characters as other than plot devices, but Powell manages it with Raijin.

There is also some lovely imagery here, sparked by Powell’s imagination. The arks are a rich and diverse lot of vehicles and spaces, both on the outside as well as on the inside. From tropical parks, to giant oceanic spaces to Mediterranean seacoast towns to more traditional corridors and decks, the arks provide humanity with not quite the wide range of lost Earth, but enough that there is plenty to explore. It is even mentioned that some people have tried to “walk through” every ark but none have succeeded. There are also other rather striking images here, including a dive into a Black Hole, a megastructure and a fantastic chase scene through it, and much more. It’s a richly envisioned novel.

That goes to culture and sensibilities as well. Thanks to transport technology, the very technology that saved humanity,  and the arks generally being close to each other, humanity has self selected and self sorted into communities and societies. With one notable exception, thanks to the technology of the arks, all of these communities are in effect, post-scarcity economies and societies and Powell shows a selection of communities with that sort of economics and base. It also rather pointedly makes fun of capitalism (as the main characters do find themselves at that aforementioned  major exception) and the characters reaction at the absurdity of Capitalism in a post-scarcity environment is delightful. Given that there was a ticking clock of a threat, we couldn’t get a tour of more ships, but I would love to see more of the arks. And, given that there are many arks only named, and many not even given that, I am sure that future novels in the series will have plenty of room to invent.

There is also a sense of found family here, but coming from it sideways as a theme. Given that when humanity was put onto the arks (willingly or no, as one of the flashback sequences makes painfully clear) and given that people self sorted and selected themselves to the arks and do that to the present day, there is a sense that the old bonds of humanity have largely been excised, and that humanity sorting has created a whole raft of found families, finding and sorting themselves in a way they never could on Earth. In a way, while posing new strictures, the angels have liberated humanity as well.

And finally, if this is your first Gareth Powell novel, you should know that he leavens his work with a lot of humor, especially of the dry British kind. This ranges from titles of chapters to quirks of characters.  In this I especially think of the tabby cat, Sam . All animals have been uplifted by the Angels, and so we wind up with Sam as a secondary character who has opinions on the proceedings and provides some wry observations, especially about Eryn’s budding relationship with her inamorata, Li.

The one thing that is unusual, and VERY welcome in Stars and Bones is that for all of this apparently being the first novel set in this verse, it is a complete and whole story. You can read this story, get a satisfying narrative from start to finish, get introduced to the setting and the verse and feel satisfied with that, and, at least in my case, be curious as to the questions raised about the verse and what else is out there in the Continuance universe. Powell’s experience in crafting a story really comes into his powers here, and I look forward to what happens to the fleet and its inhabitants in the next installment.

Bonuses: +1 Strong resonances and dialogue with other Space Opera novels and stories

+1 For some excellent imagination on what future societies on the ships might be like, shorn of the constraints of our world.

Penalties: -1 The Dry British humor may not be to the taste of all readers