Genevieve Cogman’s The Untold Story continues the story of multiversal Librarian Irene Winters, as her longstanding conflict with Librarian traitor Alberich comes to a head, with revelations about the Library’s true nature. 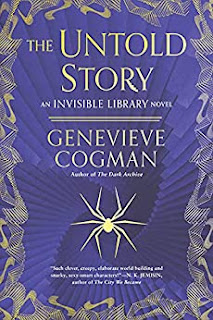 How does one really review the 8th(!) book in a series and make that review intelligible to readers who have never read any of the books, and yet helpful to readers both old and new alike. This is the situation where I find myself talking about Genevieve Cogman’s The Untold Story, eighth in her Invisible Library novels.

I’ll start by saying that the Invisible Library novels, which the first was published in 2016, were multiverse before the multiverse was the new hotness. Imagine a multiverse of worlds , aligned on an order-chaos spectrum a la Moorcock. Imagine these worlds taking cues from Earth cultures and societies.  Imagine two sets of superhuman beings--Dragons, representing order, and Fae, representing chaos, struggling for control and domination of these worlds.  Now imagine a third power, a third party, the Library, seeking to stabilize the worlds, and collect books from all of them at the same time. 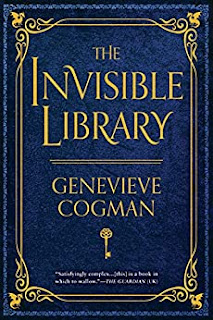 Irene Winters is one of these interdimensional Librarians. Her previous adventures have had her tangle with a traitor to the library (Alberich, more on him anon) deal with both Fae and Dragon politics (her first assistant is a Dragon, and her newest apprentice is a Fae) and visit a variety of worlds in places inspired by Venice, Vienna, New York, and more. Irene is rather good at being a spy and procurer of books, less so a diplomat (pity she is now a representative on a major treaty between the Fae and Dragons and Library).

The answers and path lead her into the heart of the library itself, and to the origins of the library, who and why it was built and what ultimately it was for. Cogman puts a lot of cards on the table here: a catastrophic meeting with Alberich, betrayals, secrets, lost history and Irene trying to make sense of it all, and only slowly revealing mysterious forces and actors at play.

While revealing the plot would be grossly unfair and I won't do it to detail, what I can say about this novel is to address its themes, which are definitely a strong point of the novel, even more so than previous volumes in the series. What are stories? What do stories mean to us, and about us, and for us? Are we destined to be the players in our stories and what does that mean to be in a story? Even more than Irene's visit to Fae worlds, this novel is all about the eponymous Untold Story--but there are several at work here: Irene's true origins. Alberich's true nature. The origin, purposes and destiny of the Library. These stories and dissecting them and deciding what ultimately one's personal stories mean are strong narrative chords to the novel. A couple of characters in the novel are explicitly storytellers.

This is of course no place to start the series. Cogman does reference and ground the reader as well as one can, eight books into a series, and I suppose a reader starting here could make most sense of things. There is a lot of new concepts here that a new and seasoned reader alike will have to grapple with, so in some ways one could start here. However, given the denouement of the novel, I think the next book in the series is the real next point where a new reader can jump in, because the status quo definitely does not go back to ante by the end of this novel.

If I do have a criticism of the novel, it is this: While Cogman does continue her habit of taking Irene to strange and unusual worlds in the multiverse, the visit this time (to Constantinople) feels a lot less satisfactory than the Vienna, Paris, New York and others of previous visits. We also get a visit to Helsinki but that is even more limited in scope. In some ways this is offset by the giant set piece of going deep into the heart of the Library itself, but it was disappointing to me to find Constantinople as described to not only be very limited in the geography we see, but even the imagined geography (the whole sketched in suggestive details background writing thing) to be somewhat limited as well. I would have loved to have seen more of this alternate city and how and why it is alternate from the one we know.

Other than that, I found The Untold Story a very satisfactory entry in the series. It does all the things I expect in a Invisible Library novel: strong cold opening (a la James Bond ) with action beats, book geekery, snark, banter, and a light and entertaining tone throughout, even in the direst of circumstances. These books are comfort reads and listens for me, and I suspect, for a wide swath of Cogman’s readers besides me as well. The Big Reveals make sense, and once again, organically expands and illuminates Cogman’s multiverse. Given the state of that multiverse at the end of this novel, I am very curious as to where Cogman will take Irene, Kai, Catherine, Vale, and the rest of her cast of characters.

Bonuses: +1 for stunning and interesting revelations about the nature of Irene, and the Library itself.

Penalties: -1 The set piece in Constantinople does not quite work for me.