Its plot is thinner and its protagonist less vibrant, but Nona the Ninth still delivers the full Locked Tomb experience 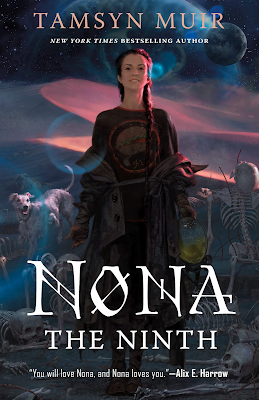 So, unless you’ve been locked in a tomb (with no wifi signal) since 2020, I’m going to assume you know about Tamsyn Muir’s Locked Tomb series. Starting with Gideon the Ninth and continuing into Harrow the Ninth, the Locked Tomb is a series of (obligatory “spoilers start here” warning) wisecracking cosmic cultists, of necromancers and their swordhands and the (literally) soul destroying things they’ve done to keep their cursed empire safe from the vengeful ghosts of its own planets, and of the absurd number of poor emotional choices they have made while doing so. As far as we all knew, the Locked Tomb was to be a trilogy, ending this year with Alecto the Ninth. And yet, we were all of us deceived, for another book was made. Before we get to hang out with Alecto, first we must make time… TO MEET NONA.

…Nona? Who the fuck is Nona?

Well, yes. That’s the question, first asked in the epilogue of Harrow the Ninth and which provides much of Nona the Ninth’s central mystery. Six months after the dramatic climax of the previous book, Muir introduces us to the six-month old consciousness inhabiting Harrow’s body, by all accounts enjoying her life in a wartorn city in the apartment she shares with Camilla Hect, Palamedes Sextus (different person, same body) and Pyrrha Dve. Aside from being a six-month-old consciousness in a nineteen-year-old’s body, Nona has a whole bunch of other things going on. She heals absurdly fast, she’s completely incapable of reading or writing but can inherently understand all spoken languages, she detests eating human food  but sometimes thinks about how nice it would be to eat sand - and her hair grows really, really fast. Oh, and she’s also relentlessly chipper and optimistic, exuding a vibe that is somewhere between “born sexy yesterday” and “live laugh love” in the face of the pretty relentless misery of her surroundings. After the edginess of Gideon and Harrow, it’s a bold move to centre book three around a protagonist who could be outperformed on the edginess stakes by a Minions meme, but it’s the kind of bold move that The Locked Tomb is all about, and here we are.

Speaking of bold moves, Nona the Ninth plunges the reader into a story that jumps off from a fundamentally different place to its predecessor, and while it doesn’t use the reader’s likely confusion as a plot point in the same way Harrow the Ninth does, there’s still zero contextual hand holding if you don’t remember the finer details of that book. (Note: if you do need a refresher, this is a fantastic video recap which covers the key points and some of the meme highlights). The vibes of the setting are different: rather than being at the heart of the empire’s elite, Nona the Ninth’s city setting is – on first glance, at least – full of the ordinary people who make up the world of the Locked Tomb, albeit those living under the threat of annihilation. Even the book’s divisions lean into a more “slice of life” feeling: instead of acts, we have days, and the events of those days are summarised with a combination of whimsical and ominous statements: “Regarding Nona – Hot Sauce Is Watchful – the City Has a Bad Day – Nona Gets a Bedtime Story – Five Days until The Tomb Opens.” To hear Nona tell it, the blue light in the sky threatening planetary destruction is noteworthy but still less interesting than her day at school, where she looks after the teacher’s six-legged dog and is a tolerated low status member of the “cool kid” gang. Of course, plenty of things that happen to Nona which serve to give the reader information: not least her dreams, which we experience as intermissions where Harrowhark and John wander an empty post-apocalyptic environment and John talks about the world before the Nine Houses. She also has an extended family beyond Cam, Pal and Pyrrha which includes Coronabeth Tridentarius, now a high ranking member of the local Blood of Eden group, and while Nona doesn’t have many insights into “Crown” beyond how hot she is, she is at least in the room where more interesting discussions happen between the characters who are more than six months old.

Nona, if it wasn’t clear already, is a source of frustration for me as a character. It’s not that her characterisation is bad: she is perfectly designed to be loveable, the ultimate cinnamon roll doling out affection to characters like Camilla and Palamedes who, frankly, deserve to have someone telling them she loves them on a regular basis. And her role as an innocent sacrifice, happy to live for as long as possible while accepting that ultimately she will die for someone more “important” to return, fits perfectly and heartbreakingly within the broader religious symbolism of the series, and is especially well balanced with John’s sinister personal story and the reprehensible actions he has taken as a self-proclaimed God. On the other hand, Nona is passive, has very little critical insight and because her personal mystery is heavily implied to be tied up with her death, her presence feels like it serves as a brake on the story, rather than helping it to progress. We won’t get back to the main events until we solve whether Nona is Person A or Person B, and once that happens, it’ll be very sad that we no longer have the cinnamon roll, but we can get on with all this tomb unlocking business and maybe kill some more resurrection beasts, so what are we waiting for?

This serves to make the first half of Nona the Ninth feel slow, with a niggling sense that this is a narrative originally conceived as a single act of a bigger book, now stretched over a whole book by itself. Perhaps the reason that wasn’t originally the plan is because there wasn’t quite enough material here to go “oh, yeah, this is a whole book”, especially when shoved between a big Act 2 showdown and a hopefully even bigger finale? It’s nowhere near Victor Hugo levels of “let me stop the plot to tell you about day-to-day life in a nunnery”, but somehow even with the countdown to the opening of the tomb, the physical reminder of destruction hanging over the city, and Nona’s constant references to her own mortality, Nona the Ninth is missing some of the urgency and momentum that made Gideon the Ninth and Harrow the Ninth so utterly irresistible. Things do pick up significantly in the second half, as events around the war and the Blood of Eden presence on the planet come to a head and more familiar faces re-emerge (like, you’ll NEVER GUESS WHO – actually, no, you’ll find out in good time). By the end of the book, I was absolutely raring to go for Alecto the Ninth, but I was also missing the sense of pure emotional turmoil that I got from the previous books, especially Harrow the Ninth.

Regardless, the weakest of the Locked Tomb series is still a spectacular book, and as a piece of serial storytelling, I suspect Nona is going to look more impressive as part of the whole. While Nona’s saccharine sweetness is no substitute for the, uh, spice of Gideon and Harrow, it’s nothing short of an expert move to make a tonal shift work like this at all, and Nona’s story expands the world of the Locked Tomb in ways which I am excited to see pay off. Now it’s time to sit tight, scan the horizon, and wait to see how one or more fleshes might meet one or more ends in the final volume.