Microreview: Battle of the Linguist Mages by Scotto Moore

This is the most fascinating concept I've seen in years, but its style is not for everyone 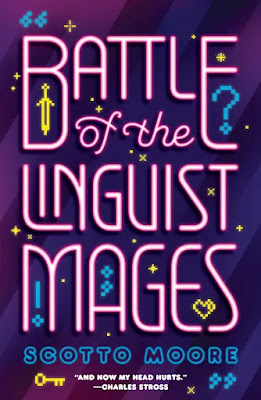 Some titles are an insta-buy. One cannot see a novel called Battle of the Linguist Mages and not buy it. So it has that going for it. However, this novel is very specifically geared toward its own inimitable combination of tastes. You'll need to sustain a high tolerance for a bright neon nightclub aesthetic and extensive speculations on theoretical linguistics and an RPG-style narrative structure with quests and milestones and leveling up and trippy journeys to extradimensional battlefields made of pure abstraction and perennially snarky dialogue that goes out of its way to make every electronic music pun English will allow and nobly principled anarchist rebel fighters who never stop reminding you how so very nobly principled anarchist rebel fighters they are.

It starts great, don't get me wrong. But unless you're inured to the taste this book requires, it can quickly become too much.

Our protagonist is Isobel Bailie, an Extremely Online young woman who prides herself in crushing the leaderboard at the MMORPG Sparkle Dungeon. She slays rainbows; she battles bejeweled assassins; she rules benevolently over the dance floor that is her domain. But the musical spellcasting system in this videogame is secretly the training grounds for an ethically contortionist ad agency that has discovered a way to weaponize the building blocks of language. You just give them some time and, with enough cleverly phrased messages, they can take over the world.

To me, it makes every sense that the shady corporation in a punk rebellion story with wordplay-based combat happens to be an ad agency. As the holder of a business degree and half a communications degree, I can definitely confirm that marketing is the Dark Side of rhetoric. So when our heroine is recruited by this company as a junior project manager, it doesn't take long for her to be embroiled in a breakneck political conspiracy with vast repercussions for the whole cosmos.

To give you just an example: in a fairly early scene, we learn that the punctuation marks are an incorporeal alien species that has lived in the human mind since before civilization. And that's not the half of how weird this book gets from there.

To quote Illidan Stormrage: you are not prepared.

The early chapters show us Isobel learning to use a repertoire of difficult magic words that twist human perception and thereby alter reality. But her rise in the world of corporate verbal manipulation and subliminal political campaigning is thwarted by an independent faction that has devised its own magic words and opposes what it sees as humankind's bondage to an alien intelligence. With lightning pacing, Isobel's adventure takes her from our world to the realms of tangible thoughts and written code. When language is your weapon, anything you can describe in the source code of reality can be spoken into existence. Soon the limits between what is real and what is merely imaginable are blurred with indelible glitter.

The concept is so mindblowing that I didn't mind the sheer length of infodump this novel threw at me. I was so fascinated by the possibilities of its magic system that I ate up every scene of exposition. I must warn, however, that Isobel's first-person narration takes a good amount of getting used to. The prose here must be commended for producing the most convincingly girly girl I've seen emerge from the pen of a male author, but her inner monologue is supersaturated with pop culture references and deflecting irony and genre-savviness and multiple meta-layers of internet lingo and, for some reason, strongly opinionated remarks on dance subgenres. If that's your jam, you'll absolutely fall in love with Battle of the Linguist Mages. As for me, I had to take frequent breaks to breathe. I'll say this for Scotto Moore: he succeeds at making Isobel's voice an intense presence throughout the book. I just felt it turn too intense at times. Maybe I'm old.

Battle of the Linguist Mages is, quite appropriately, built on metaphor. The cosmic enemies of our brave anticapitalist warriors are, in one corner, an uncaring force of insatiable consumption, and in the other corner, a self-proclaimed lord who feeds on the strength of the masses. The plot presents interesting scenarios about the human cost of hoarding power in too few hands and the inherently corrupting effect of tools of dominance. But Moore can't resist the impulse to turn his world-ending scenario into material for joke after joke after joke until it's hard to believe in the threat anymore.

Even the last chapter, which is written in the strongest voice of the book, ends too quickly. This is a common pattern here. Once Isobel becomes a being of bits and ideas, her invincibility comes off as cartoonish, and there's no longer any reason to fear for her. At the end of the novel's repeated succession of, frankly, low-tension battles with no real losses, the truly epic climax promises a resounding bang, and instead deflates without even a moment to savor the heroine's victory. This would have been easy to fix by writing more transitional material, but instead the impression that remains in my mind is that of a gorgeous multicolored soap bubble that pops, and that's it.

Bonuses: +1 for a brilliant and original concept, +1 for devoting an entire chapter to a poetic first-person description of the existential confusion of teleportation.

Penalties: −1 for tonal inconsistency, especially its often misplaced sense of humor, −1 for battles that resolve too neatly and never really convey a sense of danger, −1 because Isobel's rivals turn to her side too easily. As a pacifist, I'll applaud any heroine who makes allies out of her enemies, but the way those conversations are written lacks sufficient tension to make each change of mind land with the weight it calls for.